CST
translation
Source:SMM
According to SMM research, inventories in the bonded area fell by another 30, 000 tons this week, and stocks in the previous period fell nearly 20, 000 tons compared with last week. LME stocks went to the warehouse slightly after an increase of 27000 tons last week.

SMM, June 6 / PRNewswire-Asianet /-Copper stocks in the Shanghai Free Trade Zone fell 30, 000 tons to 498000 tons on Thursday compared with Friday, according to SMM research. In May, the domestic smelter overhauled more, and the economic benefits of scrap copper increased, resulting in the shortage of domestic electrolytic copper spot and the opening of import window, more foreign trade copper clearance entered the country. The bonded area fell by 90,000 tons for five consecutive weeks, basically the same as the same period last year. 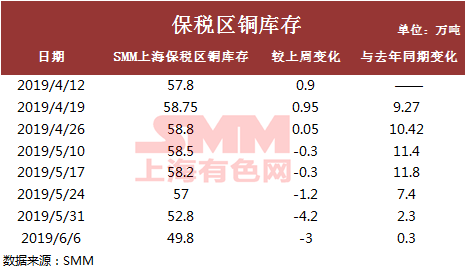 Since the second quarter, domestic smelters have taken the lead in centralized maintenance, especially in Shandong and North China. In May, due to the impact of maintenance, the output of electrolytic copper in SMM China was 633500 tons, down 10.33 percent from the previous month. Down 15.23% from the same period last year, spot supply is tight. At the same time, consumption gradually returned to normal in the second quarter, and copper prices have continued to fall since April due to macro factors. According to SMM, orders placed by terminal enterprises have increased after the price drop, copper production has been boosted, and production has increased slightly. Scrap copper has lost its price advantage because of tight supply, and the consumption of scrap copper has shifted more to electrolytic copper consumption. Since April, the stock of the previous period has dropped by nearly 116000 tons, the bonded warehouse copper clearance import copper has also been continuously declared for import, the domestic is still in the storage cycle, the inventory rhythm is expected to continue to the end of June. Inventories on the three exchanges totaled 386000 tons as of June 6, compared with a high of 770000 in the same period last year. Current inventories are less than 50 per cent in the same period last year. Following the delivery of 27000 tons by LME last week, it was in a small state of going to the warehouse. The recent European data performance is poor, the terminal consumption performance is not good, LME0-3 spot rise sticker water is low. 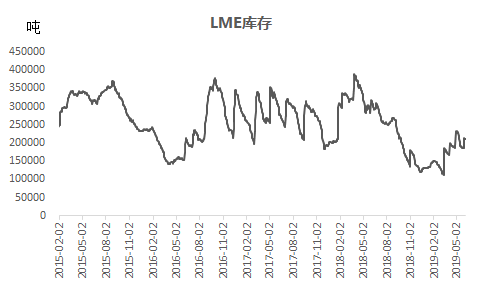 In the near future, the domestic spot maintains the tense situation, and because of the risk aversion mood, the spot copper spot transaction is cautious, has the certain support to the spot rise paste water. However, recently, the import window has been opened, and some imported copper has flowed into China, so we should still be vigilant against the crackdown on the subsequent promotion of copper customs clearance in foreign trade.