SMM1, March 23: on the 23rd, the "2018 National House Price-to-income ratio report" released by the Yi Ju Real Estate Research Institute shows that the national average transaction price of commercial housing in 2018 was 8544 yuan per square meter, an increase of 122 percent over the same period last year. The increase was 6.5 percentage points higher than in 2017. In 2018, the per capita disposable income of urban residents nationwide was 39251 yuan, an increase of 7.8 percent in nominal terms over 2017, a drop of 0.5 percentage points. The national price-to-income ratio for commercial housing was 8 in 2018, up slightly from 7.7 in 2017. From the absolute level of the price-to-income ratio, it is in a high range, the second highest in nearly 20 years, second only to the boom period of 2009 after the rescue of the market in 2008. 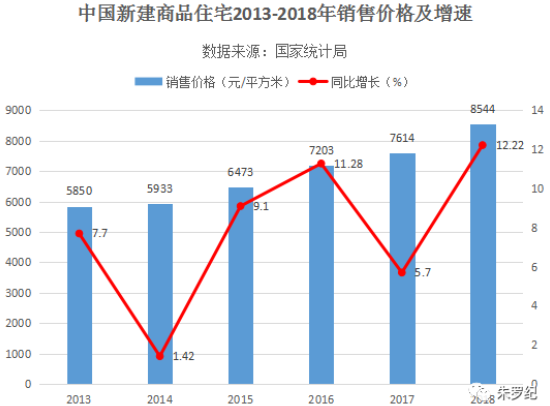 In addition, house price income in 2018 rose 0.3 compared with 2017, to a nearly 20-year high, indicating that house prices are growing faster than residents' income, and the house price bubble continues to blow up. Many people may have thought that house prices would rise in 2018, but they did not expect them to rise so much. Since the 731 meeting of the political Bureau of the CPC Central Committee proposed to resolutely curb the rise in house prices, there has been an obvious shift in market expectations for the real estate industry, which is reflected in the fact that there is no market in the first-tier cities of Guangzhou and Shenzhen in the north. The transaction is in the doldrums, the local rackets have been met one after another, the enthusiasm of the developers has faded, Vanke has shouted to live, and the real estate companies have begun to localize. Until recently, Wang Jianlin announced a complete withdrawal from the real estate industry. Zhang Dawei, chief analyst of Zhongyuan Real Estate, said in an interview that from the general trend of the market, the difficulty of buying a house is already a common phenomenon. Yang Delong, chief economist of Qianhai Open Source Fund, said that the era of buying a house lying down to make money is over. Before that, the chairman of CCB said bluntly that buying a house now is a high order!

According to the data released by the Bureau of Statistics, house prices in first-and second-tier major cities have begun to make a slight correction, while media reports show that house prices in a few places have begun to fall sharply, which is closely related to the change in market expectations. The support of housing prices in many third-and fourth-tier cities only comes from the effect of currency shed transformation, and according to the process of national shed transformation, another 15 million houses will be renovated throughout the country from 2018 to 2020, which means that there will be at least two more years of bonus in the future. This is also the main force supporting housing prices in small cities.

In 2019, under the control of policy, house prices are likely to be suppressed, we can wait and see!