CST
smm insight
Source:SMM
Silico-manganese alloy is unlikely to be oversupplied for the rest of 2018 as new capacity finds it difficult to match demand

SHANGHAI, Aug 17 (SMM) – China’s silico-manganese alloy is unlikely to be oversupplied for the rest of the year as new capacity would find it difficult to catch up with demand, SMM expects.

As growing demand pushes up prices of silico-manganese alloy, many new capacities are scheduled to be commissioned in the second half of the year. However, not all of them would go ahead as planned due to potential delays in construction.

SMM expects additional monthly output to be up to some 40,000 mt in the remaining months of the year while demand growth is likely to be more.

China’s new standards on rebar specifications, effective from November 1, have been bolstering the demand for alloy since its issuance earlier this year.

Data from China Iron and Steel Association (CISA) showed that its member mills produced 207.24 million mt of rebar in 2017. SMM estimates that about 8.5 million QTB was produced every month. This means that demand for 6517 silico-manganese alloy would grow at least 40,000 mt per month.

Some mills told SMM that actual silico-manganese alloy consumption jumped some 80% to meet the new standards, compared to adopting the quenching and tempering process. 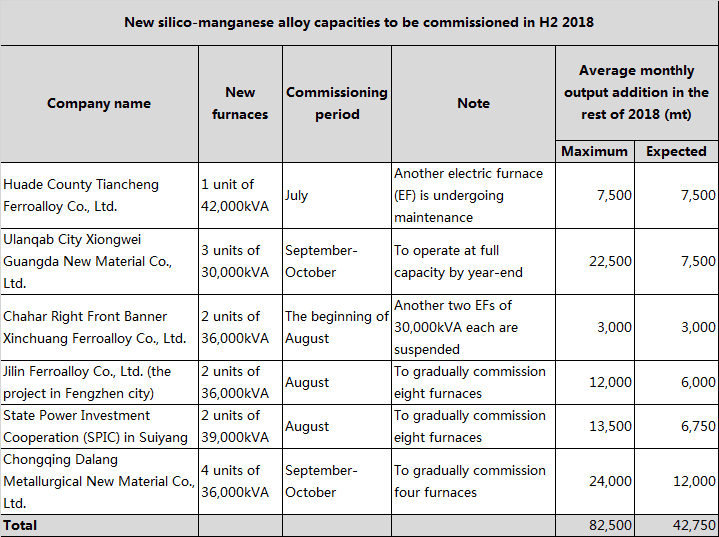 China issued 7th batch of metals scrap import quotas for 2020
The China Solid Waste and Chemicals Management Bureau, a unit of the Ministry of Ecology and Environment, granted import allowances for 10,423 mt of high-grade copper scrap to 14 companies in the latest release, bringing the cumulative quotas for this year to 540,184 mt.