CST
data analysissmm insight
Source:SMM
China exported 81,000 mt of silicon metal in May, up 24.6% from a month ago as low inventories pushed buyers to restock

This brought the total exports for the first five months of this year to 342,000 mt, up 8.7% from a year earlier, data from China Customs showed.

In May, traders managed to ship their April orders that were delayed by additional documents required for customs declaration. In late April, some local customs brokers at Huangpu port, a major port for silicon metal exports, asked traders to provide documents including value-added tax (VAT) invoices and historical prices.

Export volumes in June are likely to fall as international buyers were cautious in procurement given the supply growth in China. However, we expect exports in July to increase as traders brought forward the customs declaration of their early August orders on worries over stricter rules on imports and exports.

At the end of June, China Customs released new changes in declaration of cargoes both entering and exiting the country. More stringent documentation and more specific information are required under the new rule.

Things like using other companies’ export documents or discrepancies among various documents are expected to be reduced. 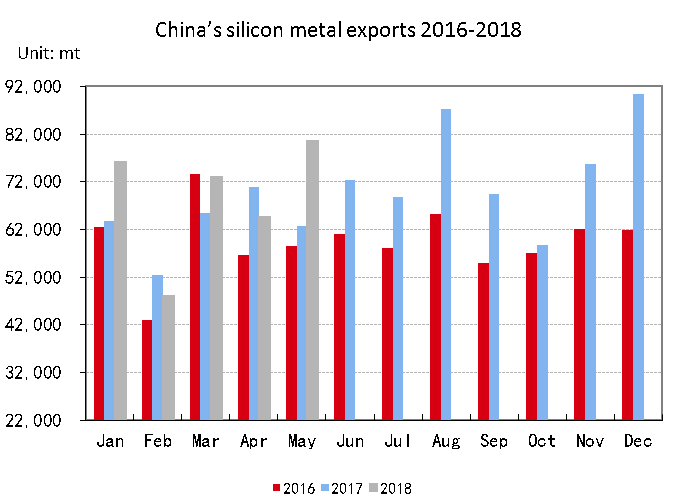 Operating rates of China silicon plants rallied to 33.3% in April as mills in south-west reopened
Resumption of production in Yunnan and Sichuan accounted for the rally in April’s operating rates. Silicon plants in Nujiang of Yunnan and Ngawa and Leshan of Sichuan reopened part of their capacity ahead of the arrival of rainy session, and this offset some capacity curtailment in Xinjiang and Chongqing due to losses and tight ore supply.

Operating rates of China silicon plants fell to fresh 4-year low in March
Last month, the capacity in operation reduced in Xinjiang, Sichuan and Shaanxi. Continued raw materials shortage kept major silicon plants in Xinjiang from resuming the capacity that has been shut down since February. Meanwhile, falling silicon prices prompted some medium-scale producers to cut output or undergo maintenance in the second half of March.

Silicon inventories at ports rose on greater arrivals amid transportation recovery
Overall inventories of silicon metal remained in a downward trend as of February 28, but inventory at ports increased as the resumption of motor traffic in south China accelerated the shipments of...