CST
Source:SMM
Zinc prices maintained upward momentum in 2017, thanks to the fundamental story. LME zinc refreshed a 10-year high, and SHFE zinc jumped above 27,000 yuan per tonne, up over 20% so far this year.

SHANGHAI, Oct. 30 (SMM)－Zinc prices maintained upward momentum in 2017, thanks to the fundamental story. LME zinc refreshed a 10-year high, and SHFE zinc jumped above 27,000 yuan per tonne, up over 20% so far this year.

Supply tightness was the main driver of the surge in zinc price in 2017, said Yao Qunxiang, head of SMM lead&zinc team, at the 2017 SMM Nonferrous Metals Industry Meeting.

Where Will Copper Price Go in 2018? SMM Reports

According to SMM data, refined zinc output at domestic zinc smelter slid 1.46% year-on-year during Jan-Sept 2017. Refined zinc output began to drop from March. Smelters stepped up production in H2 2017, but growth may fall short of the same period of last year because of raw material shortages and environmental protection checks. Refined zinc output is set to stay low in Q1 2018 because of insufficient zinc concentrate supply.

SMM survey finds zinc demand has been released since Q3 as operating rates at galvanizers rose to a high level. Zinc consumption by the galvanizing sector will grow steadily in 2017.

Based on the above reasons, zinc price is expected to remain strong in early 2018. But as supply and demand are gradually balanced, zinc prices will fall slightly from highs in the latter half of the year, looking for support from 20,000 yuan per tonne, he predicted. 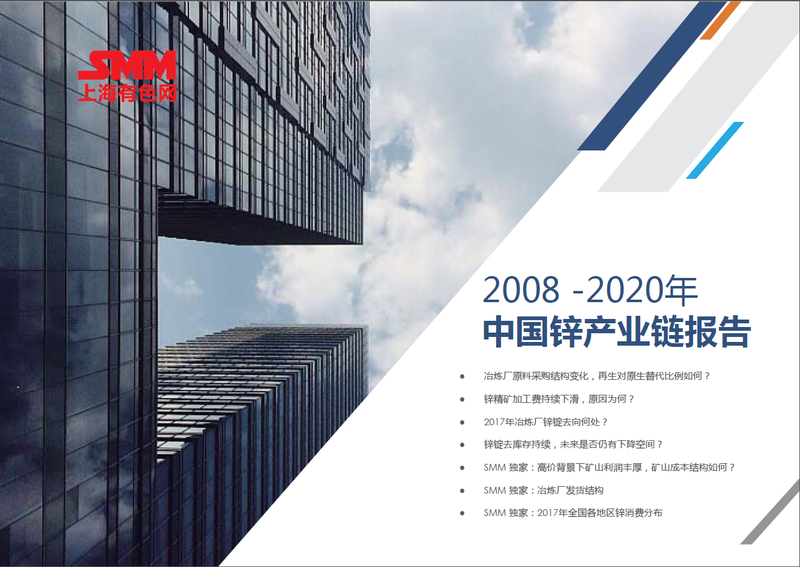 Zinc concentrate benchmark TC lowest since 2006 on tight supply
The 2018 annual benchmark zinc concentrate treatment charges (TCs) dropped 14.5% from that of 2017 to a 12-year low as supply dwindled.

What’s Impact from Closure of Fankou Lead-Zinc Mine? SMM Reports
Fankou lead-zinc mine will close for 15 days for checks on its electric wire and cable as required. What’s the impact from the closure?

Shanghai Spot Zinc Market before and after National Day Holiday, SMM Reports
Spot premiums on zinc in Shanghai fell rapidly in the latter half of this week as traders sold actively to generate cash before the upcoming Chinese National Day holiday.

What Cause Zinc Spot Premiums to Shrink Sharply in Tianjin? SMM Reports
Spot premiums on #0 zinc shrank sharply from 580-750 yuan per tonne early this week to 400-450 yuan per tonne over SHFE October zinc in Tianjin on September 22, SMM reported.