CST
Source:SMM
Looking back on 2022, the copper prices fell after rising. In the first half of the year, copper prices gained upside momentum from constantly low inventory and easy monetary policy to stabilise the domestic economy.

SHANGHAI, Jan 5 (SMM) - Looking back on 2022, the copper prices fell after rising. In the first half of the year, copper prices gained upside momentum from constantly low inventory and easy monetary policy to stabilise the domestic economy. The domestic and overseas copper prices rose sharply under the background of energy shortages and rising inflation caused by overseas geopolitics, when LME copper price hit a new high. With overseas economies gradually withdrawing from loose monetary policy, the US Federal Reserve’s interest rate hike expectations intensified amid the high inflation. As such, copper prices dropped rapidly in the second half of the year.

The overall copper prices were quite strong in the first half of the year. After the Chinese New Year (CNY), a number of policies were introduced to stabilise the economic growth, like reserve requirement ratio (RRR) cuts, interest rate cuts, and easy monetary policies. And the copper prices rose rapidly amid the low inventory in addition to bulls on the macro front. Meanwhile, the unexpected outbreak of the Russian-Ukrainian conflict triggered a series of energy and inflation issues. As the metal costs rose amid the energy crisis, the market's expectations for high inflation aggravated and the commodity prices rose significantly. Meanwhile, the prices of non-ferrous metals soared during the extreme LME nickel price moves in March 2022. And LME copper price hit a record high of $10,845/mt in early March.

In the first half of the year, the pandemic outbreaks occurred extensively across the country since March 2022, and Shanghai was subsequently locked down for more than two months. During this period, the transportation was restricted and the spot supply of copper cathode tightened. The copper processing enterprises were forced to reduce or stop the production. The spot premiums of copper cathode rose sharply. And the imports and circulation at pots were also directly affected with Shanghai being an important distribution hub for copper cathode in China. On the whole, the pandemic outbreak in Shanghai had a great impact on the entire copper market in China.

After the domestic pandemic outbreak subsided and amid the continuous release of economic stabilisation policies including RRR cuts, copper prices regained momentum in addition to the low inventory. At the same time, the US CPI and PPI rose sharply and once hit the highest level in nearly 40 years. Under the pressure of high inflation, the expectation of the Fed raising interest rates and shrinking the balance sheet strengthened. As the Federal Reserve accelerated the interest rate hikes, the European Central Bank also announced to raise the interest rates. As such, the liquidity tightened, and the US dollar index rose.

In the second half of the year, under the expectation of substantial interest rate hikes in Europe and the United States and the global economic recession, the US dollar index remained strong and once hit the high point at 114.79, which was almost a new high in 20 years. Led by the falling crude oil prices, the global industrial products prices declined sharply, and the copper prices fell to an annual low of 53,400 yuan/mt.

In terms of the fundamentals, the inventory of copper remained low in the second half of the year. The rapid decline of copper prices led to a sharp drop in the output of copper scrap. At the same time, with the promotion of infrastructure projects, the demand for copper cathode continued to pick up while the supply dropped further, accounting for the extremely low copper inventory. Specifically, the price spread between SHFE 2010 and 2011 copper contracts once exceeded 2000 yuan/mt amid the short squeeze in China and abroad. Meanwhile, the spot premiums remained high as a result, and copper consumption was also directly affected. In this scenario, domestic social inventory stopped falling, alluding weakening support that was originally enabled by the low inventory. 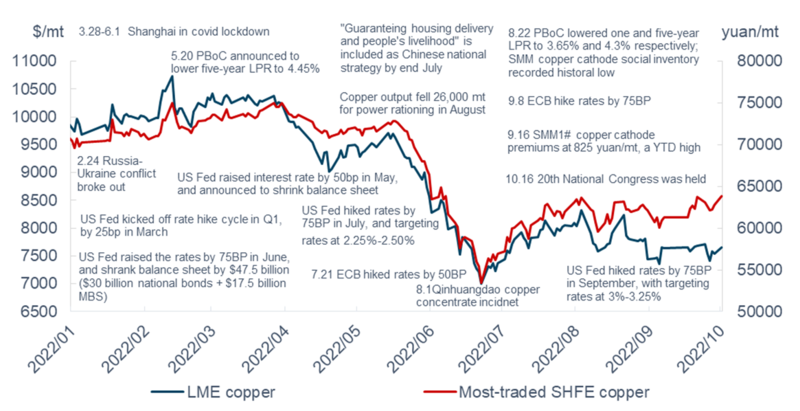 Aggressive interest rate hike bets in the US in 2022, recurring pandemic in China and a series of unfavourable economic data led to the market's concerns about the economic slowdown. As an indicator of global economic health, copper prices have fallen more than 30% after it hit a record high of $10,845/mt in March 2022.

In terms of the macro front, the global manufacturing PMI in September fell below the 50-point mark for the first time since June 2020. The economy in Europe showed signs of recession, that in Asia diverged and that in the US depressed. On September 26, the Organization for Economic Cooperation and Development (OECD) released its mid-term economic outlook report. According to the report, it lowered the global economic growth forecast for 2023 from 2.8% to 2.2% after pricing in the conflict between Russia and Ukraine. The inflation in Europe and the US remained high and the European Central Bank raised the interest rates amid the dilemma of controlling inflation and boosting economic growth. The pace of radical interest rate hikes in some places slowed down in light of the weak economic performance.

SMM will try to predict the copper market in the next 3-5 years from the fundamentals. The output of global copper mines is recovering at present. With the contribution of new and resumed capacity, SMM expects that the copper concentrate output will increase significantly in 2023, with a supply excess of about 216,000 mt in metal content. In the long run, SMM believes that the excess copper concentrate supply will contract from 2023 to 2026, and the supply will be in shortage of 150,000 mt in metal content by 2025 with the output growth enabled by expanding mine production coming to an end. In China, there will still be a large number of new and expanded smelting capacity projects in the next two to three years, hence the supply surplus of copper cathode is unlikely to change in 2023 and 2024. After 2024, the market players should observe the impact of new energy consumption on the marginal growth of copper consumption. In 2023, the global mine production will recover rapidly and the TC/RC is expected to continue to rise. Meanwhile, it is still profitable to produce sulphuric acid as the prices remain strong. It is estimated that the domestic copper cathode supply will add 775,000 mt or 7.7% in 2023.

In terms of the consumption, as the favourable macro policies are far from making up for the financing void in the real estate market, the consumer confidence is still bearish. In the next two years, the copper consumption in real estate sector will decline. In terms of household appliances, due to the decline in export orders, weak domestic demand and copper being replaced by aluminium, the copper consumption is expected to contract significantly.

Following the financial deficit in the fourth quarter of 2022 and falling investment support, the consumption of copper in the in infrastructure sector in the first quarter of 2023 will potentially be affected. But the infrastructure sector will remain the pillar for overall economic development. Infrastructure and new energy sectors will become the driving forces of copper consumption in 2023. And the new energy market will remain strong driven by new energy vehicles, photovoltaic and wind power generation fields.

In general, the growth of domestic copper consumption is expected to slow down in 2022-2024, and the domestic copper cathode supply will be surplus. After 2024-2025, driven by new energy and other fields, the growth rate of copper consumption will recover, and the domestic raw material market will face structural transformation. It is expected that in 2023, the fundamental support for copper prices will weaken, but the impact of macro front cannot be ignored. Against the backdrop of global economic inflation, the global economy is facing stagflation and even recession risks. Especially recently, the copper/oil ratio has rebounded, a warning that the economy is contracting from stagflation to recession, but is still at a low level. The pace of interest rate hikes in major countries may slow down, and some countries even plan to introduce the stimulus plan to support the economy.

Therefore, copper prices may rise after falling in 2023. LME copper are expected to trade between $6,500-8,500/mt in 2023 and the most-traded SHFE copper contract will stand at 55,000- 71,000 yuan/mt. In the long term, the declining copper ore grade, resource depletion and water resource shortage will gradually intensify the supply tightness of copper concentrate, and it is increasingly difficult to form a industrial closed loop for copper scrap. Meanwhile, the accelerated transformation to a green economy around the globe will boost the copper demand, and copper prices are expected to rise strongly.