On the demand side, the operating rates of secondary aluminium alloy producers stayed stable, while those of primary aluminium alloy manufacturers grew slightly. The pre-holiday restocking was basically over, and the release of new orders slowed down. Most of the secondary aluminium alloy companies are going to have a holiday of about 3-4 days during the National Day holiday, and those that maintain operation will slow down the production. Most silicon monomer companies faced the risk of expanding losses as the DMC prices fell to 17,500-18,500 yuan/mt as of September 29 and the spread between DMC and #421 silicon metal expanded inversely. Polysilicon enterprises maintained high operating rates. As the new production capacity of polysilicon, such as GCL, will be put into production in October, the demand for silicon metal will boom.

In the first week after the National Day holiday, it is expected that most downstream companies will remain wait-and-see, and some cargo holders will reduce their prices slightly to clinch a deal. The high silicon metal prices will continue to suppress the silicone industry. Moreover, supply instability still exists in Sichuan and Yunnan during the dry season. In general, the silicon metal prices will remain stable in the short term after the National Day holiday, while prices of some specifications may be slightly reduced. The market shall pay attention to the progress of the new production capacity of silicon metal and polysilicon. 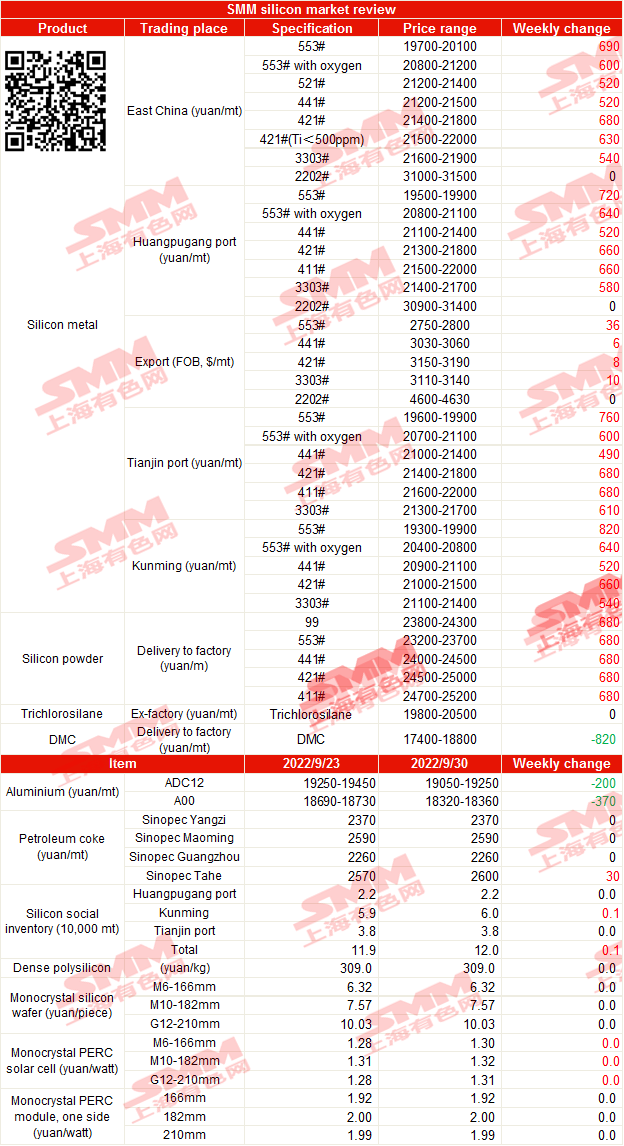 All
MOST POPULAR
1.China Weekly Inventory Summary and Data Wrap (Dec 2)
2.Exclusive: China's Metals Output in November
3.Manganese Market is in Stalemate amid the Procurement of Steel Mills
4.Spot Prices of EMM Continue to Rise amid Tight Supply
5.Domestic Silicone Exports Declined Further in October due to Falling Overseas Demand
Shanghai Metals Market
Privacy PolicyCompliance CentreSMM Credit ServiceContact UsAbout UsTerms & ConditionsSitemap
Notice: By accessing this site you agree that you will not copy or reproduce any part of its contents (including, but not limited to, single prices, graphs or news content) in any form or for any purpose whatsoever without the prior written consent of the publisher.