In terms of car companies, BYD sold 174,000 vehicles globally in August, an increase of 7% month-on-month and 188% year-on-year. BYD is currently actively exploring overseas markets, and has set foot in Japan, Thailand and other overseas markets in just two months. Furthermore, BYD held a European online press conference in September for new energy passenger vehicles, and launched three models targeting the European market, including the Han, Tang and Yuan PLUS with the official pre-sale price announced to further promote BYD's global positioning.

In August, the transformation of Tesla's production line was completed, and the production capacity increased as expected with sales rising as a natural result. The global sales in August totalled 138,000 units, up 81% MoM and 66% YoY. Recently, the second phase of the production expansion project of Tesla's Shanghai plant was completed with commissioning started in early September. When the expansion project is officially put into production, Tesla's overall sales in China are expected to rise to a higher level.

Kia Motors sold 11,000 NEVs globally in August, down 16% MoM and up 41% YoY. The Kia brand has been under tremendous pressure in the Chinese market in recent years. Fortunately, Kia maintained its seat in the top ten list in August with its outstanding product performance in the global market. In recent years, China's auto market has been at the forefront in terms of new energy transformation and intelligence. In order to better take advantage of China's local digitalisation trend, Kia is also actively expanding its R&D efforts in China with facilities in Yantai city (in Shandong province) and Shanghai. 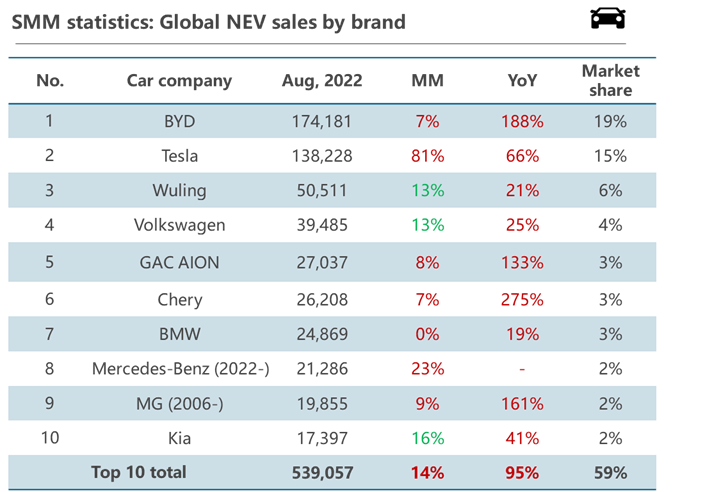 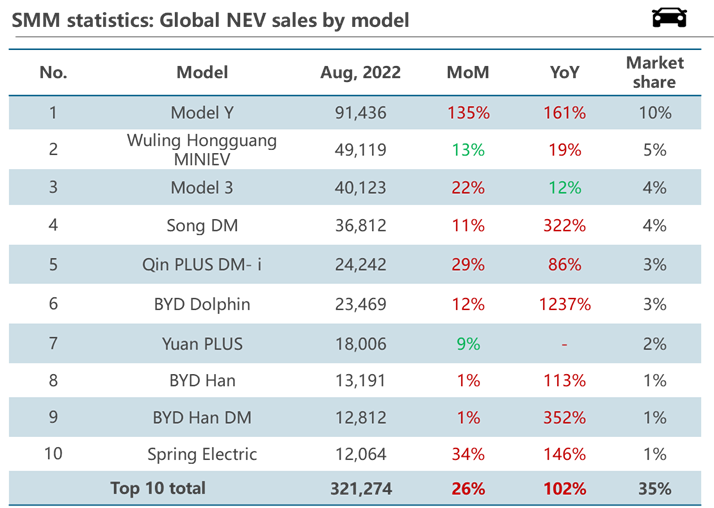 In August, China's new energy vehicle sales reached a record high of 638,000 units in a single month, an increase of 12% month-on-month and a year-on-year increase of 109%. Boosted by the purchase tax reduction and exemption policy, coupled with the low base in 2021 caused by the shortage of chips in the same period last year, China's auto market achieved a relatively significant year-on-year growth in August this year. Sales in the US market fell slightly by 3% month-on-month and added 70% year-on-year. In August, the sales of new energy vehicles were robust against the seasonal low impact. With the opening of the traditional seasonal high in September and October, the production has resumed and chip supply improved. It is expected that sales in September will continue to increase rapidly.

All
MOST POPULAR
1.[SMM Notice] SMM Newly Launches Battery Grade Lithium Carbonate Price Index
2.SMM Insights on Recent Hot Topics concerning Lithium
3.Ternary Cathode Material Manufacturers to Curtail Production in Response to Palpably Weakening Terminal Demand!
4.[Breaking] SMM Becoming an Associate Member of ILiA!
Shanghai Metals Market
Privacy PolicyCompliance CentreSMM Credit ServiceContact UsAbout UsTerms & ConditionsSitemap
Notice: By accessing this site you agree that you will not copy or reproduce any part of its contents (including, but not limited to, single prices, graphs or news content) in any form or for any purpose whatsoever without the prior written consent of the publisher.