CST
Source:SMM
The silicon metal market was less robust in the wake of the Mid-Autumn Festival holiday, and several specifications of silicon metal traded at discounts.

SHANGHAI, Sep 19 (SMM) - The silicon metal market was less robust in the wake of the Mid-Autumn Festival holiday, and several specifications of silicon metal traded at discounts. As of September 16, the prices of 553# silicon without oxygen stood at 18,900-19,200 yuan/mt in east China, down 250 yuan/mt or 1% on the week, and 553# silicon with oxygen 20,200-20,400/mt, down 150 yuan/mt or 1% on the week. Prices of 441# silicon 20,700-20,800 yuan/mt, down 50 yuan/mt on the week and 3303# silicon 21,000-21,200 yuan/mt, down 50 yuan/mt on the week. Power rationing policy in Yunnan has not been implemented yet, and the silicon metal plants in Xinjiang that had suspended the production due to the pandemic gradually resumed the operation as pandemic was under control. The downstream enterprises and traders were cautious about purchasing. Lowgrade silicon metal prices rebounded slightly, while most silicon metal plants held their offers firmly, thus there were rarely any low-priced resources. Downstream orders on rigid demand from aluminium alloy, silicone, and grinding plants continued to be released, but the transactions declined compared with the prior week.

The aluminium smelters in Yunnan already cut the production capacity by 10% in accordance with the power rationing policy, and the number of enterprises restricted by power rationing may increase subsequently. The local silicon metal plants were under normal operation, but there is a high possibility they will be subject to power rationing in the later period. However, some traders still had doubts about whether power rationing could induce the rise in silicon prices as they were bearish towards the demand from aluminium alloy and polysilicon sector as well as the overseas market, thus the market trades thinned. It is expected that silicon metal prices will remain stable this week. 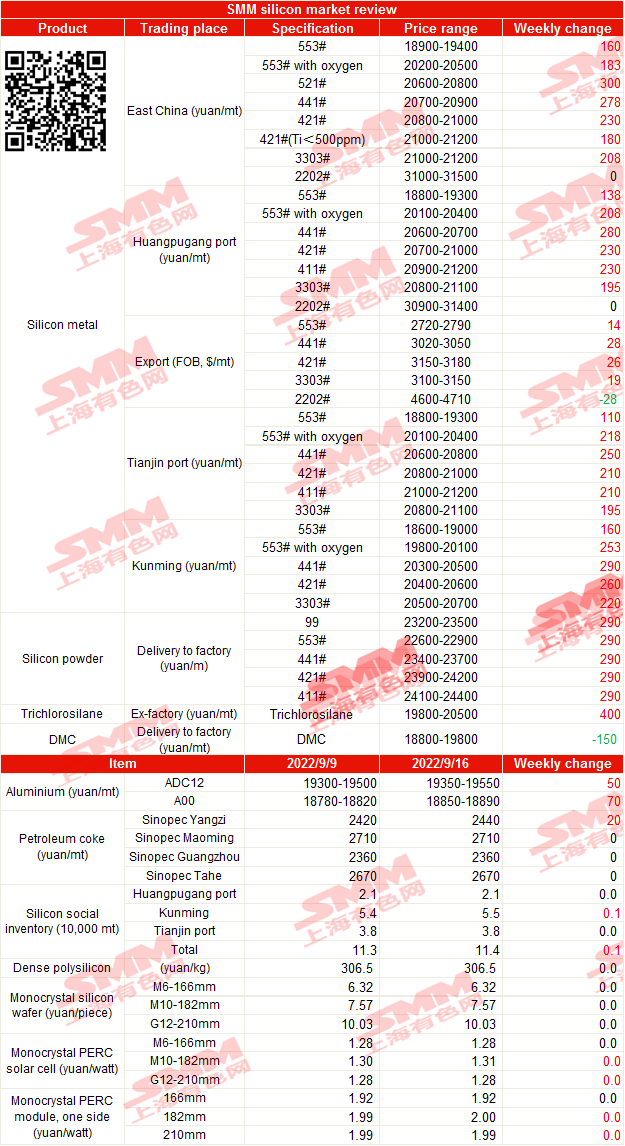