CST
Source:SMM
Up to now, the scale of production curtailment in Sichuan has expanded from 395,000 mt on Monday August 15 to 770,000 mt as of Friday August 19, and is expected to engage two-thirds of the total capacity in the province.

The issue of power shortage in Sichuan province has not yet eased, and local aluminium smelters are still shut down. Up to now, the scale of production curtailment in Sichuan has expanded from 395,000 mt on Monday August 15 to 770,000 mt as of Friday August 19, and is expected to engage two-thirds of the total capacity in the province. The total aluminium installed capacity is 1.07 million mt in Sichuan, with merely 230,000 mt still in operation at present.

In addition, the Chongqing area has also experienced continuous high temperature. Although most of the aluminium smelters in Chongqing reply mostly on thermal power, and most of whom are equipped with captive power plants, a few smelters answered the call to reduce the power use amid peak electricity consumption in summer. Therefore, the production reduction in Chongqing is insignificant for the moment, involving a combined capacity of around 30,000 mt as some smelters have taken the opportunity to overhaul. The overall production curtailment in Sichuan and Chongqing is summarised as follows: 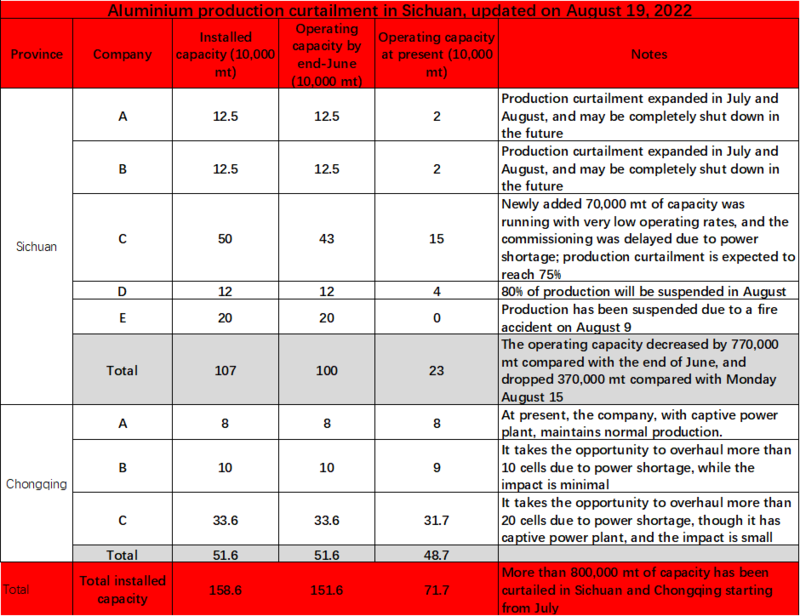 The hot and dry weather in the Sichuan-Chongqing region is expected to remain in place for some time. Sichuan, a province relies heavily on hydropower, is unlikely to shake off the influence of power supply shortage in the short term until the weather cools down, when more power will be available for the industrial sector with the reduction in civil power use. However, compared with the recovery progress of downstream players, aluminium production resumption requires longer time. Coupled with the follow-up dry season, it remains to be seen whether the power supply is able to support such an enormous scale of aluminium capacity. Therefore, it is unlikely that the local capacity will reach full production from August to December this year.

In addition, Henan province also introduced staggered power consumption, mainly targeting some aluminium smelters in Luoyang city. According to SMM research, the production has not been fully suspended, hence the overall output in Henan is little affected. Combining the new capacity in the future and the expected resumption of capacity in Gansu, Guangxi and other places, SMM predicts that the domestic operating aluminium capacity may drop to about 40.8 million mt by the end of August. And the total operating capacity is unlikely to reach the expected value of 42 million mt, and the annual output is expected to add 4.8% YoY to 40.35 million mt.

The operating pressure of aluminium smelters in Europe has also been mounting due to high temperature globally and as well as the intensive energy crisis. As such, production curtailment is also frequent in Europe, with possibilities of expanding in the future.  According to SMM statistics, 1.22 million mt of aluminium capacity has been reduced due to power prices and other reasons in Europe at the beginning of this year.

And another three cases were heard last week: ① Sunndal sora, a subsidiary of Hydro, may reduce its output by 20% due to the strike, which involves about 80,000 mt of production capacity. The plant currently has an installed capacity of 400,000 mt.

② Due to the high energy prices, Hydro will suspend the primary aluminium production of the aluminium smelter Slovalco located in Slovakia, which is planned to be carried out by the end of September. The smelter has a total aluminium capacity of 175,000 mt, and 40% of its capacity has been stopped in February this year. The remaining 60% will shut down this time, that is, to reduce the production by another 105,000 mt. It is expected that the smelter will be completely shut down by the end of September.

③ According to foreign media reports, the latest unaudited accounts of Alvance British Aluminium show that the company lost 4 million pounds last year.  With unaudited accounts for 16 months, this issue has created significant uncertainty over the outlook for its Lochaber aluminium smelter. The smelter has an installed capacity of 48,000 mt and is the only aluminium smelter in the UK.

Production cuts overseas in August are as follows: 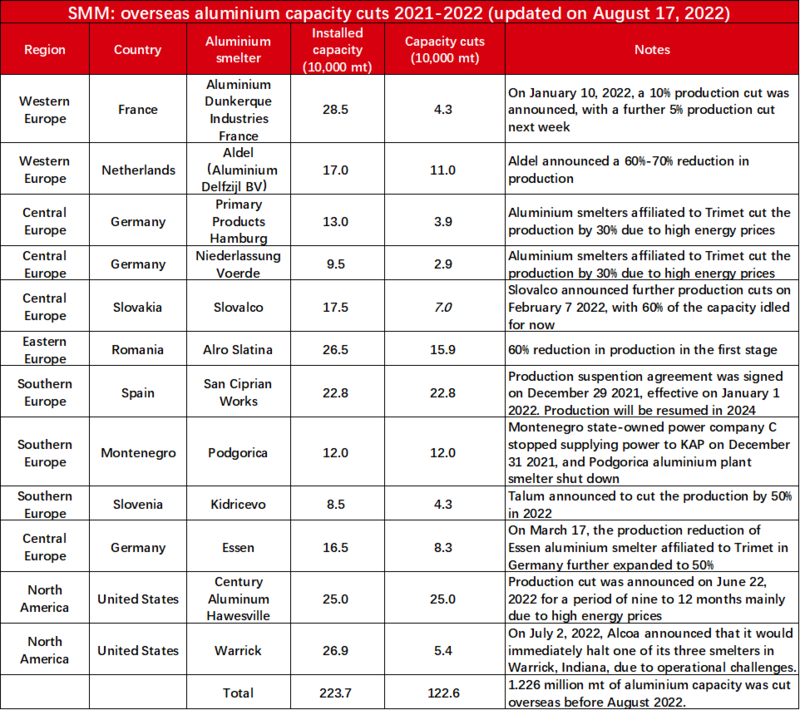 Under the European energy crisis, the local aluminium production reduction is expected to extend. According to SMM statistics, the installed aluminium capacity in Europe (except Russia) has reached 5.96 million mt, accounting for 7.5% of the global total capacity.