CST
Source:SMM
On August 3, the largest power grid company in China, the State Grid Corporation, announced it will start the construction of eight Ultra High Voltage (UHV) power projects in the second half of 2022 and accelerate the preparatory work of other six UHV projects.

SHANGHAI, Aug 9 (SMM) - On August 3, the largest power grid company in China, the State Grid Corporation, announced it will start the construction of eight Ultra High Voltage (UHV) power projects in the second half of 2022 and accelerate the preparatory work of other six UHV projects. The State Grid will invest over 150 billion yuan in the eight UHV power projects, which includes seven UHV power transmission projects. These new investment can be seen as a part of infrastructure spending that can stimulate China’s economy. SMM believes oncoming UHV power projects could bring more commodity demand, especially aluminium, which is crucial to support domestic consumption expectation. 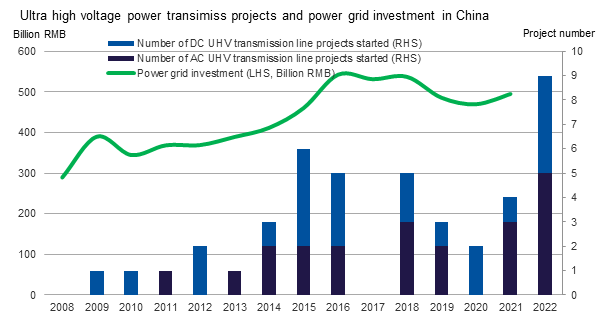 According to National Energy Administration, the annual power grid investment in China has been below 500 billion yuan since 2019, which is lower than spending during 2016-2018 period.  At the same time, new UHV power transmission projects became less as well. One reason is the heavy investment has resulted in huge debt of power grid companies in China. The other reason is the demand in new UHV power transmission line has contracted after these investment.

Due to the requirement of energy transition, more renewable energy projects are expected to come on stream in the future. As these renewable energy projects are mainly located in the north and west of China, We have no reason to doubt that the Chinese power grid companies will need more UHV projects for electrical transmission to the east of China, the region with the highest electricity demand. If China’s economy needs more infrastructure projects for stimulus, the government can consider accelerating the progress.