CST
Source:SMM
In the first half of 2022, affected by the pandemic outbreak, the actual installed capacity of domestic photovoltaics was lower than expected; but it still managed a year-on-year increase.

SHANGHAI, Aug 2 (SMM) - In the first half of 2022, affected by the pandemic outbreak, the actual installed capacity of domestic photovoltaics was lower than expected; but it still managed a year-on-year increase. The newly installed capacity reached 30.88GW in the first half, a year-on-year increase of 17.9%. The photovoltaic industry maintains a high industry prosperity, which has also brought about a continuous rise in prices across the photovoltaic industry chain. The most "crazy" scenario happens to the prices of polysilicon.

Up to now, the polysilicon prices have experienced nearly 20 consecutive rounds of hike, which have now exceeded 310 yuan/kg, an increase of 33.2% compared with the beginning of the year. The growth rate is significantly higher than that of cells, silicon wafers and modules. 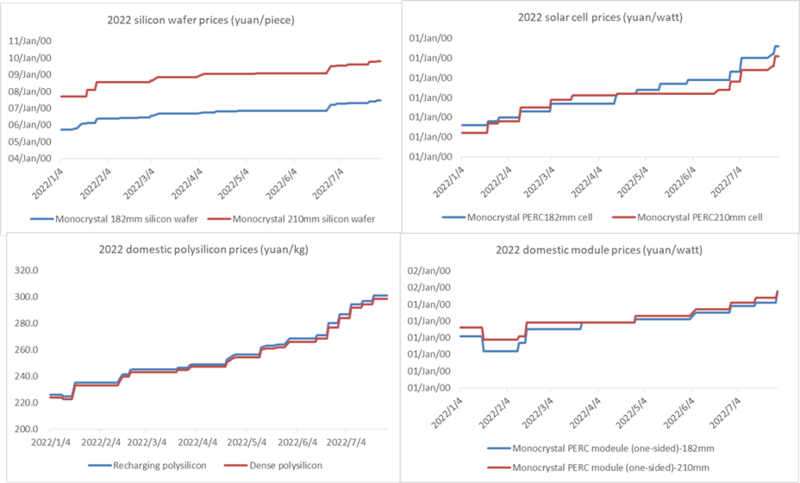 The main reason for the "frenzying continuous hike" of domestic polysilicon prices still lies in the imbalance of market supply and demand. At present, there is a serious mismatch between the overall production capacity and the downstream demand. According to SMM statistics, as of the first half of 2022, the domestic silicon wafer capacity is about 500GW, while the polysilicon capacity is about 840,000 mt (about 227GW) during the same period, alluding serious supply insufficiency of polysilicon. In addition, all the polysilicon enterprises reported full-load production in the first half and the long-term contracts were signed in advanced for a sustained period of time, all of which evidenced the fact that polysilicon is now highly sought after.

Now the questions comes as this: will the market continue to "be in extreme short supply" or will it be "the end of the crazy price hike"?

SMM believes that from the perspective of supply and demand balance in the overall global market, polysilicon will gradually balance or even become oversupplied from 2022 to 2023. And the situation of oversupply will remain in place in the future for a long time, when polysilicon prices will also pivot.

Looking at the current situation, in the first half of 2022, a number of domestic projects led by companies including East Hope and Lihao have been delayed, when the supply of polysilicon remained in short. For the second half of the year, leading new projects will be released in a concentrated manner. Especially in the third quarter, about 300,000 mt of new capacity will be put into operation, and the domestic supply shortage will be relieved to a certain extent. 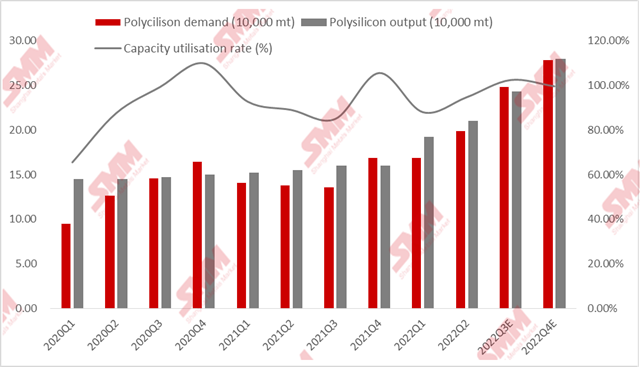 From a longer perspective, with the rapid release of new global polysilicon capacity, the supply of polysilicon will increase significantly, when, not only the supply gap will be fulfilled, but it will turn into surplus soon. Apart from rising production following the commissioning of new capacities, the silicon consumption per watt will also be significantly reduced with the continuous advancement of downstream silicon wafer and cell technologies, etc. The supply and demand of polysilicon will gradually return to rationality, and even become surplus, and polysilicon prices will gradually fall.

Shanghai Metals Market
Privacy PolicyCompliance CentreSMM Credit ServiceContact UsAbout UsTerms & ConditionsSitemap
Notice: By accessing this site you agree that you will not copy or reproduce any part of its contents (including, but not limited to, single prices, graphs or news content) in any form or for any purpose whatsoever without the prior written consent of the publisher.