Tesla, the top car company in terms of sales, sold 148,931 unit in June, an increase of 76% month-on-month and 71% year-on-year. According to Tesla's Q2 financial report, its Shanghai and California factories both reached their highest monthly output in the second quarter. The California factory had an annual production capacity of over 650,000 units, and the Berlin Gigafactory had an annual production capacity of over 250,000 units. Tesla's four major factories all reported increasing production capacity. Elon Musk, Tesla's CEO, said that Tesla's car production might grow higher in the second half of this year. In June, BYD's global sales totalled 134,027 units, an increase of 17% month-on-month and a year-on-year increase of 233%, ranking second. BYD has sold more than 100,000 units for four consecutive months. Unlike Tesla that only sold electric vehicles suach as Model Y and Model 3, BYD's sales varied in terms of car models, and pure electric cars and plug-in hybrid electric cars were both included. In the new energy market, BYD's sales in the first half of 2022 exceeded 640,000 units, surpassing Tesla to rank first in the world. According to BYD's official estimates, BYD's total sales in 2022 will reach 1.5 million units, and are expected hit 2 million units if the supply chain is well established. 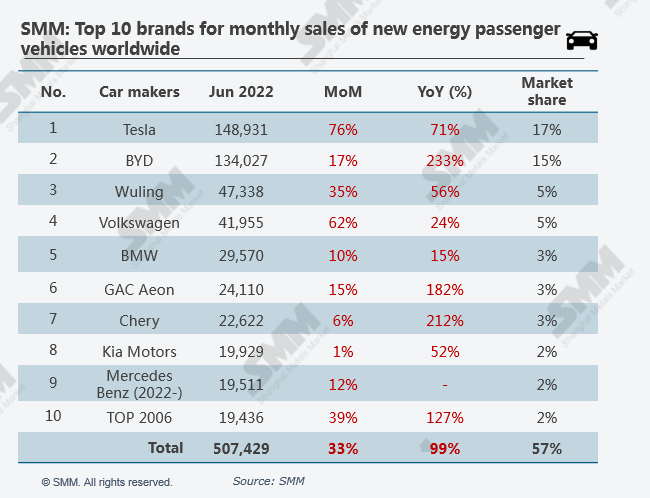 In terms of car models, Model Y, Model 3 and Wuling Hongguang MINI still remained the top three. The sales of Model Y were 90,000 units in June, an increase of 100% month-on-month and a year-on-year increase of 261%, while the sales of Model 3 in June were 54,000 units, up 63% on the month and down 12% on the year. The decline was attributed to the pandemic which led to suspended production at Tesla's Shanghai factory and reduced overseas exports. According to Der Spiegel, the German Ministry of Economic Affairs plans to end the subsidies for PHEV purchases earlier at the end of this year, and reduces the cash subsidies for purchasing electric vehicles by one-third from 2023. The Times also reported that the British government in June cancelled the policy of providing 1,500 pounds of subsidies for electric vehicles purchases. All these policies had affected the sales of electric vehicles. In June, five BYD models made it to the top ten list. Among them, Qin PLUS, whose sales had declined due to the rectification of production lines in its Changsha plant, sold 12,111 units after the rectification, an increase of 9% month-on-month and 31% year-on-year. 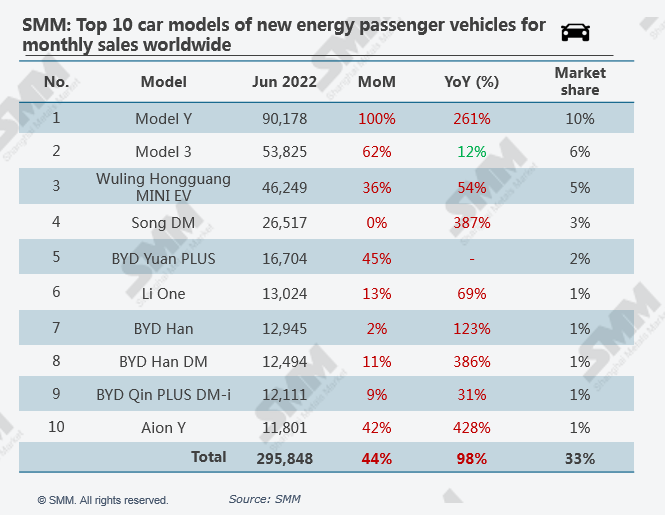 At the same time, NEVs sales in Germany, Britain, France and Italy, who contributed most of the sales in Europe, fell by 10%, 1%, 9%, and 10% year-on-year respectively despite of increase on the month. This was mainly due to the impacts of Russian-Ukrainian war and subsiding subsidies. At present, the improved supply in the Chinese market and the rising oil prices have boosted the new energy market. The month-on-month increase in NEV sales in June was also significantly driven by favourable policies. In particular, some subsidies and new car consumption vouchers are effective only for first comers or may expire at the end of June, further boosting the sales of automobiles in June.

MOST POPULAR
1.Average Price of Spodumene Concentrates Broke Through $5,000/mt, and Battery-grade Lithium Carbonate Prices Gained another 1,500 yuan/mt
2.Sales of NEVs Totalled at 896,000 Units Worldwide in June, and BYD Ranked First in the First Half
3.Lithium Carbonate Prices Jumped by 1,000 yuan/mt in A Single Day, Lithium Hexafluorophosphate Prices Rose for Five Consecutive Days
4.China's Output of Lithium Carbonate and Lithium Hydroxide Both Surged in the First Half of 2022
5.Cobalt Sulphate Prices Plummeted within 4 Months, and Will the Ternary Battery Market Usher in a Turning Point?
Shanghai Metals Market
Privacy PolicyCompliance CentreSMM Credit ServiceContact UsAbout UsTerms & ConditionsSitemap
Notice: By accessing this site you agree that you will not copy or reproduce any part of its contents (including, but not limited to, single prices, graphs or news content) in any form or for any purpose whatsoever without the prior written consent of the publisher.