CST
Source:SMM
The demand for copper rods increased quickly after the global financial crisis in 2009, thanks to the Chinese government's 4 trillion yuan investment and China's rapid development in power, construction, transportation, home appliances and other fields.

The demand for copper rods increased quickly after the global financial crisis in 2009, thanks to the Chinese government's 4 trillion yuan investment and China's rapid development in power, construction, transportation, home appliances and other fields. In the first year of the "Twelfth Five-Year Plan" in 2011, China ushered in a period of vigorous development of power investment, and the wire and cable sector also generated huge demand for wire rod. And under the background of the high operating rates of the copper rod industry, a large amount of funds poured into the market, providing a solid foundation for the rapid development afterwards. With the introduction of high-end continuous casting and rolling production line technologies such as SMS in Germany and Southwire in the United States, the production capacity of copper rods produced with copper cathode expanded rapidly, with a combined capacity of more than 16 million mt.

SMM data shows that the major producing areas in China are mainly in the economically developed southeast coastal areas, and the production capacity of copper rods produced with copper cathode in east China and south China accounts for about 63% and 13% of the national production capacity respectively. East China is the consumption hub of copper wire and cable as well as enamelled wire. Benefiting from its superior geographical location and strong downstream demand, the concentration of copper rod enterprises is also higher than other regions. Among them, the production capacity of copper rods in Jiangsu Province accounts for about 30% of the country's total, ranking first. 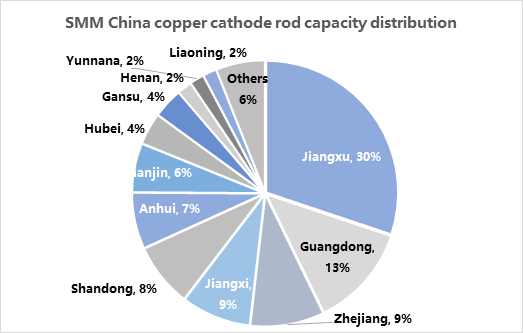 With the rapid expansion of the copper rod industry, the situation of oversupply has surfaced. The annual capacity utilisation rate of the industry in 2020 and 2021 is only about 68%, and the growth of copper rod production has also slowed down significantly. According to SMM survey, copper rod enterprises plan to expand their production capacity by 2.33 million mt in 2022-2023, including those extended from 2021, and the progress of some projects has been unsatisfying.

In terms of production process, it can be divided into oxygen-free copper rod and continuous casting and rolling hypoxic rod. Oxygen-free copper rod is mainly produced by domestic upward-drawing equipment, but it is difficult to achieve mass production, which only account for about 8% of the total production. At present, most of the copper rods are still mainly produced by imported continuous casting and rolling equipment. There are more than 40 production lines with equipment from SMS Germany and Southwire, with a total annual production capacity of more than 11 million mt, accounting for about 75% of the national copper rod operating capacity.

According to SMM data, the apparent consumption of copper rods reached about 9.7 million mt in 2021, while the annual capacity of copper rods produced with copper cathode and scrap has far exceeded 20 million mt. It is obvious that copper rods have become an industry with far greater supply than demand, alluding fierce competition in the industry. Due to the small quality gap of most copper rod products, enterprises can only obtain more orders through means such as the payment with credit and the reduction of conversion margins. Over the years, copper rod conversion margins have remained at a low level. Faced with rising direct production costs such as natural gas and electricity costs, it is difficult for copper rod enterprises to transfer such cost to conversion margins. In recent years, the production pressure of small and medium-sized enterprises has been increasingly severe. In this context, adjusting the product portfolio and developing high-quality copper rods have become the focus of the industry and a new direction of development.

As it is known to all that wire and cable and magnet wire are the two main application fields of copper rod. The continuous disturbance of the pandemic this year has seriously damaged the terminal consumption, pulling down the operating rates to an all-time low for several consecutive months. Although the copper prices dropped sharply in mid-June, the operating rates of copper cathode rods rebounded to around 70% thanks to falling copper prices and narrow spread between copper cathode and scrap, the actual terminal consumption was still contained. Enamelled wire companies directly faced significant losses incurred by the inventory after the copper price fell sharply, and operating rates remained low amid poor demand in China and overseas. In terms of wire and cable, stimulated by the drop in copper prices, the operating rates increased. With the loss of the price advantage of secondary copper rods, the demand for copper cathode rods rebounded significantly. However, the actual launching of infrastructure projects such as State Grid and China Southern Grid will take time, and the decline in the climate index in the real estate industry has led to the continued poor performance of civil wire and cable. Therefore in the first half of the year, the performance of the two major consumers of wire and cable was not satisfactory.

Since the growth rate of copper rod for wire and cable as well as enamelled wire kept falling in the first half, will the copper rod sector pick up in the second half? SMM believes that the demand recovery can be expected, but retaliatory demand growth in unlikely. Judging from the current survey the new energy industry has shown a substantial growth potentials, and orders related to submarine cables, photovoltaic, wind power, nuclear power, automobile and other industries have also performed well, especially the rapid production and sales of new energy vehicles. However, its demand for copper rod is far less than that of traditional industries, which is not enough to drive the rapid recovery of consumption. At present, the reduction of orders in overseas markets has become an established fact, and the rapid recovery of domestic consumption will be an important factor affecting the recovery of copper rod orders in the second half of the year. The central government has introduced a number of favourable policies to stabilise the economy, such as "subsidy for new energy vehicles", "home appliances going to the countryside", and "real estate credit support", which will undoubtedly form a strong support for the consumption side. In terms of infrastructure, State Grid's investment has been progressing in an orderly manner. According to the latest national power industry statistics released by the National Energy Administration, the investment in the power grid in June was 64.2 billion yuan, an increase of about 26% year-on-year and a month-on-month increase of about 74%, which will drive the consumption of wire and cable to a certain extent. But at the same time, it should be noted that in the 14th Five-Year Investment Plan, State Grid's investments mainly focus on UHV and distribution network intelligence, and the increase in the actual demand for copper wire and cable remains to be seen.