CST
Source:SMM
On the whole, the supply of iron ore is expected to decline only slightly this year. The production of pig iron by steel mills will decline sharply compared with last year, and the demand for iron ore will be difficult to reach the level of the same period last year.

SHANGHAI, Jul 21 (SMM) - Vale recently disclosed its second-quarter production and sales, and the most important of which was a downward revision of its iron ore production guidance for 2022. The guidance has been lowered from the original 320-335 million mt to 310-320 million mt. DCE futures prices were boosted upon the release of such news, and iron ore prices also gained some support.

Vale was originally the world's largest mine, but since the dam collapse accident in 2019, its output has dropped from 380 million mt to about 300 million mt. Currently Vale ranked second in the world. Nonetheless, the production has recovered to around 320 million mt by 2021. In 2022, due to the commissioning of new mining tenements and equipment renovation, the production guidance has been set at 335 million mt, higher than the actual production in 2021.

Secondly, higher strip ratio and tie-in effects due to presence of jaspilite waste in the S11D ore body;

Third, four days stoppage of Estrada de Ferro Carajas due to the hearvy rains in March.

Since entering the second quarter, the weather in the south-east and the south improved, growing the output significantly, which rose to 74.11 million mt. According to the latest annual production target of 310 billion mt, Vale has to achieve a total production of 172 million mt in the second half in order to complete the task, an increase of 25% from the first half.

In fact, in the southern hemisphere, the first quarter of each year usually features frequent extreme weather, and hurricanes and rainstorms have a greater impact on production and shipping. Nonetheless, the production and shipments will increase significantly starting in the second quarter, and then reach a peak in the third quarter, which is also the case this year. After the production recovery in the second quarter, the overall output of the four major mines in the first half of the year basically recovered to the level of last year. The second half is the peak shipment period. In normal circumstances, all major mines should be able to complete the target output and shipment volume.

However, domestic demand is subject to the sharp decline in the real estate industry, and the demand for finished products has dropped significantly. As of today, the number of blast furnaces overhauled due to loss or excessive pressure from finished product inventory is increasing. According to SMM statistics, 97 blast furnaces are under overhaul, affecting the daily pig iron output by 330,000 mt. As such, the blast furnace operating rate reported by SMM this week also fell sharply. 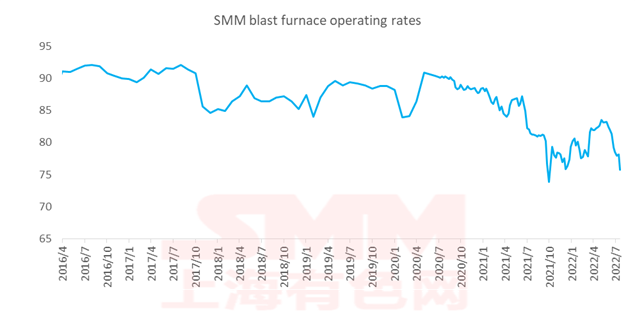 On the whole, the supply of iron ore is expected to decline only slightly this year. The production of pig iron by steel mills will decline sharply compared with last year, and the demand for iron ore will be difficult to reach the level of the same period last year. Coupled with crude steel production reduction policies to be launched, the overall reduction in iron ore demand may exceed expectation, thereby suppressing the rise in ore prices. In the short term, the prices of imported ore may continue to fluctuate with some downward risks.

MOST POPULAR
1.China Steel Exports Dropped Further in July, While Imports Record New Low
2.Iron Ore Prices to Remain Volatile in the Short Term, with Eyes on Demand
3.SMM Analysis: Iron Ore Futures Fell Back and Likely to Rise Recently
4.Steel Prices Fell Somewhat in H1 2022, but the Overall Steel Industry was Generally Stable
5.China HRC Stocks Down 61,700 mt on Week
Shanghai Metals Market
Privacy PolicyCompliance CentreSMM Credit ServiceContact UsAbout UsTerms & ConditionsSitemap
Notice: By accessing this site you agree that you will not copy or reproduce any part of its contents (including, but not limited to, single prices, graphs or news content) in any form or for any purpose whatsoever without the prior written consent of the publisher.