SHANGHAI, Jul 19 (SMM) - At the 17th SMM China Copper Summit 2022 held by Shanghai Metals Market (SMM), Jorge Cantallopts, director of policy and research of Codelco and chairman of the Standing Committee of the International Copper Study Group (ICSG), expressed his latest views on long-term and short-term copper supply, especially the Chilean copper supply.
Chile's copper production began in the 1990s, and at the same time, Chile became the largest copper producer in the world. In 2004, the annual output of Chile's copper increased to more than 275,000 mt, which grew by more than 275,000 mt in 14 years. Since then, Chile's copper production has increased by about 6,000 mt per year steadily.

On the other hand, the copper output in Peru remains stable after its production resumption last year, and that in the Democratic Republic of the Congo rises strongly, becoming the country with the largest increase in recent years.
Change of copper output in Chile

Chile's copper output in May 2022 decreased by about 160,000 mt compared with the same period last year. The output of some projects has increased such as the SPENCE projects and the Codelco projects as well as some private ones. However, they cannot make up for the decline in output in 2022 that was caused by the low-grade ore of some deposits.

In the short term, the normal rainfall will optimize and improve the water supply, which is an important factor in the decline in output, in 2022. In the long run, Chile's mining industry is seriously and firmly considering changing its water sources and using seawater. 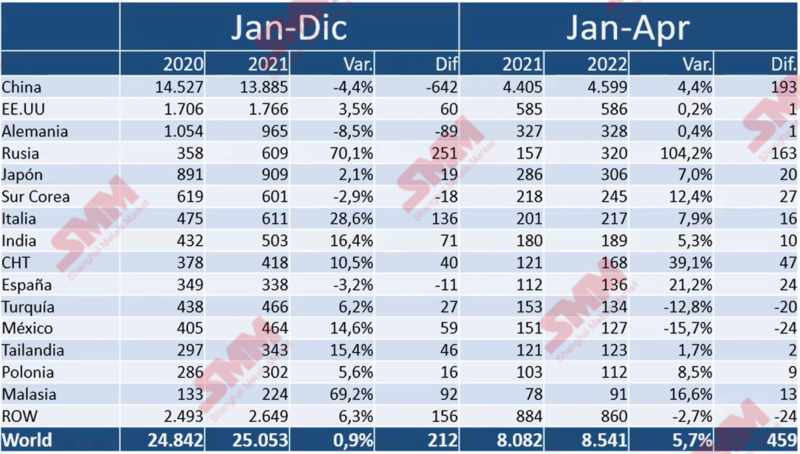 From the perspective of copper consumption data, the growth of the global economy slows down in May and June, even in July. In particular, after the central banks of European countries and the US decided to reduce inflation, the demand for copper will decrease. Although the result has not shown in April, we believe that it will appear in the rest of 2022.

The reduction of demand for the rest of 2022 will bring the world the oversupply. Similar data will show again in 2023, and we wish that copper consumption in China and other countries can recover quickly. In one word, in 2023, the market may probably see a supply surplus.

In the long run, it is worth investing in Chilean copper, and there will be some uncertainties, while the biggest one now is the international market.

We presume that Chile's future copper output will increase by about 5.6 million, 5.7 million mt or even 5.8 million mt. In Chile, if all projects can be implemented smoothly, the output will exceed 7 million mt by the year 2025 or 2026. The total output of all the potential projects can reach 8.5 million mt, which, however, is difficult to achieve.

We are sure that Chile will have reliable projects in the next few years, which need to be supported by the public policies of the government's public mining sector and the private mining industry.

Meanwhile, the production faces a great challenge. The copper cathode production in Chile by producing oxidised minerals and leaching as well as in hydrometallurgical processes cast a huge impact on the consumption of water and energy, which further increases the costs. In other words, the mining and operation costs in Chile will grow with the increase in unit cost, which is reflected in the increase in mineral output in sulphide minerals.