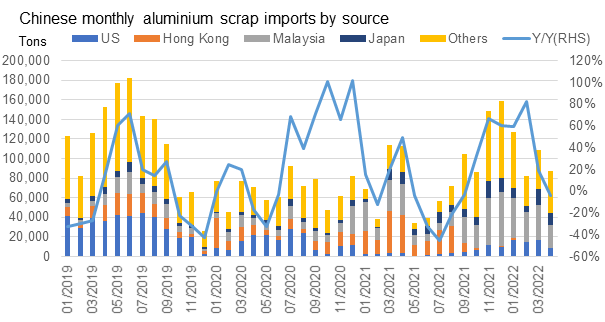 SMM understands the main reason is China Customers at main ports start to require the scrap importers provide the certificate of origin. In particular, aluminium scrap is imported from Hong Kong and Southeast Asia countries. Because the majority of aluminium scrap from these regions actually originates from the US, the importers always can avoid paying 25% import duty by entrepot trade through Hong Kong or other Southeast Asia countries. As the certificate of origin is required by the Chinese authorities, these kind of trading activities cannot be sustained anymore.  It resulted in the significant decrease in aluminium scrap imports from Hong Kong and Malaysia. Some traders are forced to shift to directly import scrap from the US under the toll manufacturing category, which can be exempted from 25% import duty.

However, aluminium scrap toll manufacturing is being banned now

SMM understands these measures normally will drive aluminium scrap supply tighter in the domestic market. However, due to the lockdowns and weak demand, Chinese secondary aluminium producers have cut their operating rates, which reduce the scrap demand in China. Aluminium scrap supply is not tight in China as it should be. At the same time, aluminium alloy ingot imports remain strong growth during the first 4 months of this year, up by 41% y/y. More and more aluminium scraps have been melted to aluminium alloy ingots in other countries before delivery to China.