CST
Source:SMM
This is a roundup of China's metals weekly inventory as of January 28.

SHANGHAI, Jan 28 (SMM) - This is a roundup of China's metals weekly inventory as of January 28.

As of Friday, January 28, the copper inventories in major domestic markets increased 8,300 mt from Monday to 98,700 mt, and added 9,700 mt from a week earlier, growing for the third straight week.

The domestic inventories began to accumulate but the growth was less than the same period last year. The stock accumulation in the last week before the CNY holidays of 2021 stood at 16,000 mt. Compared with Monday, only the inventory in Tianjin dipped slightly, while the inventory grew across Shanghai, Guangdong and Jiangsu. The inventory in other areas changed little.

As Tianjin is still affected by the COVID and consumption is still poor, smelters in the north turned to ship cargoes to the south, causing the local inventories to decline this week. The increased arriving shipments and weaker consumption in east China and Guangdong drove the inventories to grow.

The copper inventories in domestic bonded zones increased 18,600 mt from January 21 to 243,100 mt as of January 28, growing for five consecutive weeks, according to SMM survey.

With the approaching of CNY holidays, the copper import market is extremely quiet. The high import losses depressed the customs declaration and imports. Meanwhile, the transportation efficiency of warehouses decreased, hence slowing down the shipments from bonded warehouses.

In terms of arriving shipments, the inflows of shipments arrivals under B/L and the exports by the domestic smelters accelerated the growth in the bonded zone inventories.

SMM data showed that China's social inventories of aluminium across eight consumption areas were flat on the week at 726,000 mt as of January 27, with Nanhai, Gongyi, Shanghai and Hangzhou contributing most of the increase. The inventory in Wuxi dropped amid less arrivals and moderate shipments. The stocks of aluminium billet in five major consumption areas added 34,700 mt to 211,600 mt as of January 27 from a week ago, a significant increase of 19.62%. The inventory has been rising for five straight weeks.

The inventories across the five major market all recorded gains. Among them, the inventory in Foshan and Wuxi contributed most of the increase, which rose by 14,600 mt and 12,600 mt respectively, an increase of 15.48% and 33.78% week-on-week. The downstream almost stagnated in the past week on the imminent Chinese New Year, resulting in sluggish transactions.

Looking into next week, the domestic aluminium billet inventory is expected to rise further during the CNY holiday. 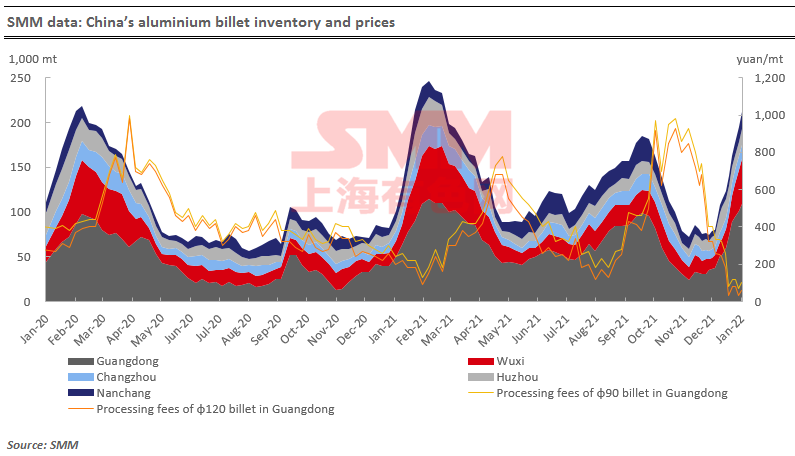 The logistics services have basically stopped on account of imminent Chinese New Year holiday and strict COVID-19 pandemic control, hence long-distance lead ingot transport was unavailable in the past week, according to SMM research. Some downstream participants that were still in production, mainly in Zhejiang and Jiangsu, have completed taking the last batch of orders. The local inventory in places like Guangdong and Tianjin have been rising for two straight weeks amid shrinking demand.

Looking into next week, there are both primary and secondary lead smelters producing in shifts, while the downstream lead-acid battery manufacturers have basically closed for CNY holiday. The market shall keep an eye on the possibilities of inventory accumulation post the holiday.

The arriving shipments and shipping slowed down as the CNY holidays are approaching. The wet season in the Philippines also limited the shipments arrivals.

The port inventory will maintain a downward trend in the short term in the absence of supplement by other resources. The import premiums can hardly fall as the arriving shipments in the bonded zones are expected to be limited post-CNY holidays.

The SHFE/LME nickel price ratio is likely to improve given the current demand and limited customs clearance.

The social inventory of silicon metal across Huangpu port, Kunming city and Tianjin port rose 3,000 mt from the previous week to 85,000 mt as of Friday January 28.

The inventory in Kunming was largely unchanged, and some of the stocks were scheduled to be shipped to other places through railway next week. The inventories in Huangpu port and Tianjin port rose slightly, as the silicon metal manufacturers and traders shipped to goods to the ports in advance for post-CNY holiday transactions amid concerns over slow recovery of logistics services post the holiday amid potential risks of resurging COVID-19 pandemic and influences from Beijing Winter Olympics.

MOST POPULAR
1.Exclusive: China's Metals Output in April
2.China Weekly Inventory Summary and Data Wrap (May 6)
3.China Weekly Inventory Summary and Data Wrap (May 13)
4.Increased Volatility in RMB Exchange Rate Led to Chaotic Export Quotations of Silicon Metal
5.The Demand of Steel Mills Released in May, Manganese Prices Moving in a Weak Trend
Shanghai Metals Market
Privacy PolicyCompliance CentreSMM Credit ServiceContact UsAbout UsTerms & ConditionsSitemap
Notice: By accessing this site you agree that you will not copy or reproduce any part of its contents (including, but not limited to, single prices, graphs or news content) in any form or for any purpose whatsoever without the prior written consent of the publisher.