CST
Source:SMM
This is a roundup of China's metals weekly inventory as of January 21.

SHANGHAI, Jan 21 (SMM) - This is a roundup of China's metals weekly inventory as of January 21.

SMM data showed that China's social inventories of aluminium across eight consumption areas rose 2,000 mt on the week to 726,000 mt as of January 20, mainly contributed by Nanhai, Hangzhou and Gongyi.

The inventory rose by 4,000 from Monday January 17. And the inventory in Shanghai and Wuxi dropped mainly because the arrivals were low and the shipments were moderate. 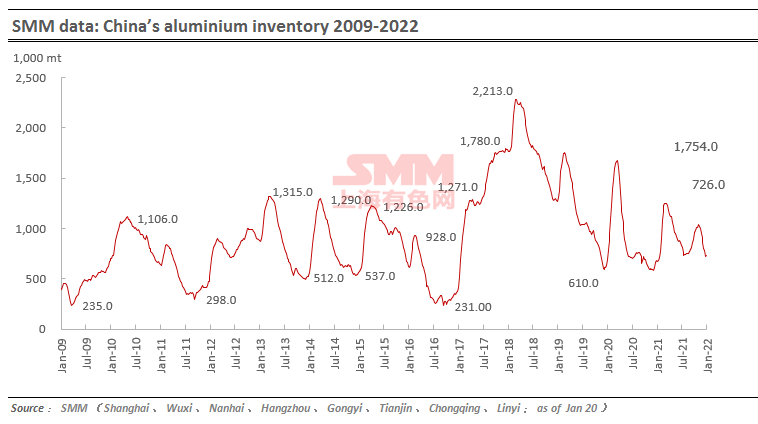 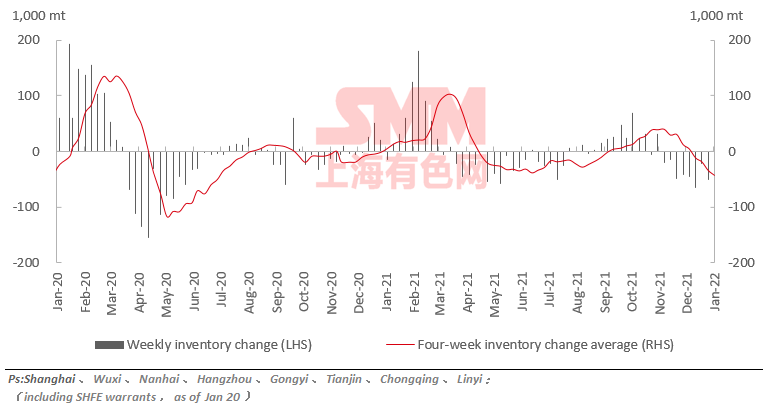 The stocks of aluminium billet in five major consumption areas added 36,500 mt to 176,900 mt on January 20 from a week ago, a significant increase of 25.95%. The inventory has been rising for four straight weeks.

All the other four market recorded gains in inventory except Huazhou. The inventory in Foshan and Wuxi contributed most of the increase, which rose by 21,500 mt and 13,200 mt respectively, up 29.53% and 54.77% on a weekly basis. The downstream orders weakened further this week, resulting in sluggish demand for aluminium billet.

Looking into next week, it expected that the downstream consumption will remain week, hence the weekly aluminium billet inventory will keep rising. 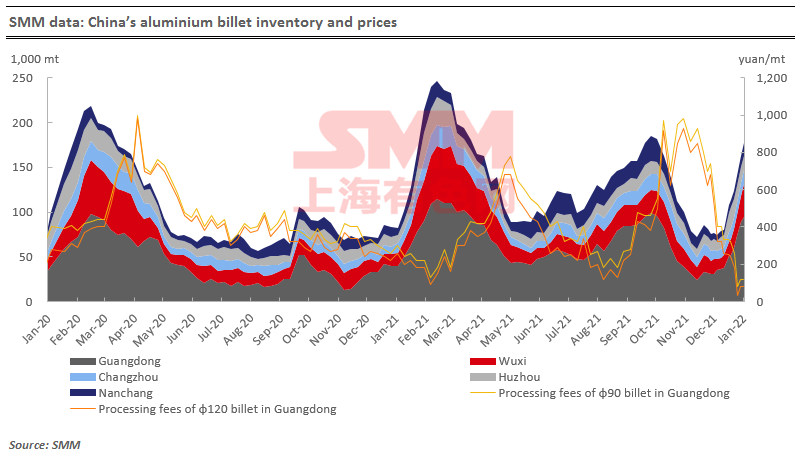 Considering that the logistics will be stopped during the Chinese New Year holiday, the downstream enterprises were stocking up the raw materials. However, the transportation of lead ingots was interrupted by the COVID-19 pandemic and early CNY holidays in some regions, so the users tended to purchase from nearby regions. As such, the inventories continued to fall in Jiangsu and Shanghai, and the total social inventory declined.

Most of the downstream battery producers will start to take holidays next week, while the primary lead will basically maintain their production, which may result in the increase in the inventories. And the stocks are likely to rise more significantly at smelters due to the stopped logistics.

The social inventory of silicon metal across Huangpu port, Kunming city and Tianjin port decreased 2,000 mt from the previous week to 82,000 mt as of Friday January 21. The domestic transactions shrank sharply this week. The inventory in Kunming declined due to the low arrivals. The shipments from Huangpu port were relatively high, while that from the Tianjin port were few. The port operations are expected to be halted by next Tuesday. The social inventory of silicon metal is expected to drop slightly next week.

As of Friday, January 21, the copper inventories in major domestic markets decreased 3,500 mt from Monday to 89,000 mt, but added 2,400 mt from a week earlier to 86,600 mt, growing for the second straight week. Compared with Monday, only the inventory in Tianjin increased significantly, while the inventory fell across Shanghai and Jiangsu. The inventory in other areas changed little.

The increased shipments arrivals in Tianjin after the COVID situation improved drove the inventory growth. In east China, the limited customs clearance for imported copper, combined with the stockpiling by downstream producers ahead of CNY holidays, lowered the inventories in Shanghai and Jiangsu significantly.

As the CNY holidays near, more downstream buyers will be closed next week, and the consumption will further weaken. The inventory is expected to accumulate.

The copper inventories in the domestic bonded zones added 7,700 mt from January 14 to 224,500 mt as of Friday January 21, the second consecutive week of growth, according to the most recent SMM survey.

Customs data showed that the imports of laterite nickel ore dropped sharply in December due to the significant impact from the wet season. The port inventory trended lower. However, the downstream purchasing interest has weakened recently as the nickel ore prices are expected to rise.

The port inventory will enter the downward track again. 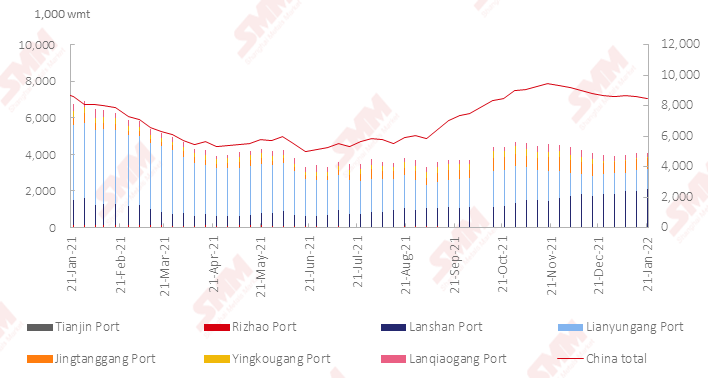 All
MOST POPULAR
1.China Weekly Inventory Summary and Data Wrap (May 20)
2.Silicon Metal Prices Kept Falling on Market Pessimism and Inconsistent Quotation
3.Silicon Metal Prices Fell Continuously due to the Poor Transactions amid Weak Demand
4.The Market Outlook of Silicon Metal Prices was Gloomy and Silicon Metal Prices Continued to Decline amid Strong Supply and Weak Demand
5.SMM Overview of Manganese Market in April and the Prospect
Shanghai Metals Market
Privacy PolicyCompliance CentreSMM Credit ServiceContact UsAbout UsTerms & ConditionsSitemap
Notice: By accessing this site you agree that you will not copy or reproduce any part of its contents (including, but not limited to, single prices, graphs or news content) in any form or for any purpose whatsoever without the prior written consent of the publisher.