CST
Source:SMM
This is a roundup of China's metals weekly inventory as of January 14.

SHANGHAI, Jan 14 (SMM) - This is a roundup of China's metals weekly inventory as of January 14.

As of Friday January 14, the copper inventory across major Chinese markets added 200 mt from Monday January 10 to 86,600 mt, which is quite rare recently.

The inventory in Shanghai rose greatly by 7,200 mt to 69,000 mt, and that in Guangdong and Jiangsu dropped by 2,600 mt and 3,800 mt respectively to 9,100 mt and 5,300 mt. Tianjin saw a decrease of 900 mt to 800 mt. The inventories in Guangdong and Jiangsu dropped more significantly amid less arrivals and restocking demand ahead of the Chinese New Year. Tianjin saw a decline in inventory mainly because the local COVID-19 pandemic has prompted some smelters to ship their goods to east China, resulting in lower inventory in Tianjin and rising inventory in Shanghai. The inventory increase in Shanghai was also partly contributed by the slight increase in imports that cleared the customs.

Looking into next week, as more downstream companies will take the CNY holiday, the demand will weaken further. Hence the inventory will enter the upside trajectory.

Copper Inventory in China Bonded Zone Up 13,300 mt on Week

The copper inventories in the domestic bonded zones increased 13,300 mt from January 7 to 216,900 mt as of Friday January 14. The inventory rose for three straight weeks.

The inventory in Shanghai bonded zone rose 10,500 mt on the week to 188,000 mt, while that in Guangdong bonded zone added 2,800 mt to 28,800 mt. The import and export windows both closed this week, hence the customs clearance was quiet. The Yangshan Copper premiums kept dropping in the past week, and some goods that arrived at the ports were stored into the bonded zone, pushing up the total inventory.

SMM data showed that China's social inventories of aluminium across eight consumption areas dropped 52,000 mt on the week to 724,000 mt as of January 13, mainly contributed by Shanghai, Wuxi, Nanhai, Hangzhou and Gongyi. The inventory in Gongyi declined the most. The inventory dropped by 28,000 from Monday January 10 amid less arrivals at warehouses.

The arrivals are expected to rise next week ahead of the Spring Festival. 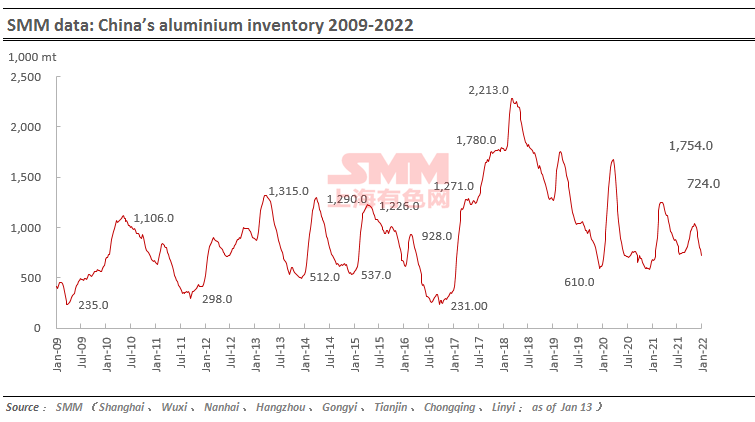 The stocks of aluminium billet in five major consumption areas added 27,300 mt to 140,500 mt on January 13 from a week ago, a great increase of 24.07%. The inventory rose more slowly than the previous session, but was still recorded substantial increase.

The inventory rose broadly across the major producing areas except Huzhou. The inventory in Foshan rose the most by 20,300 mt or 38.67% on a weekly basis, followed by Wuxi whose local inventory rose 6,400 mt or 36.16%. According to the warehouses, the aluminium billet arrivals were concentrate, while the outflows from warehouses dropped steeply as the downstream orders were lacklustre ahead of the Chinese New Year.

Looking into next week, and weekly aluminium billet inventory is likely to keep rising amid weak downstream demand. 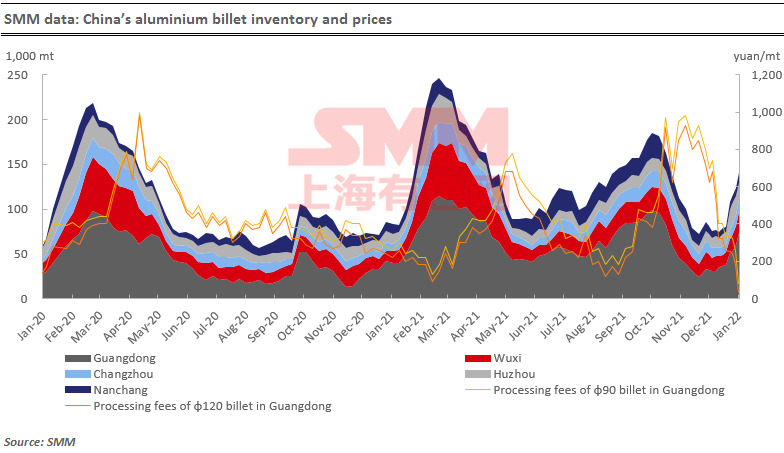 The inventory dropped on the week. Among them, the domestic zinc supplies in transport in expected to arrive in Shanghai next week, and the downstream also presented some restocking demand; hence the inventory in Shanghai kept dropped. Guangdong saw added inventories amid rising arrivals and weakening demand. In Tianjin, the demand was further depressed by the COVID-19 pandemic, and the shipments from the smelters also reduced, resulting in higher inventory.

In general, the combined inventory in Shanghai, Tianjin and Guangdong was flat from a week ago, while that across seven major markets in China dropped 2,400 mt.

The social inventory of silicon metal across Huangpu port, Kunming city and Tianjin port dropped 2,000 mt on the week to 84,000 mt as of Friday December 14.

The downstream actively restocked ahead of the Chinese New Year, and the arrivals reduced after the silicon metal manufacturers in Yunnan reduced their output. The inventory in the warehouses in Yunnan dropped significantly on the week. The inventories across Huangpu port, Kunming city and Tianjin port were basically flat YoY, because the seasonal inventory decrease as a result of pre-holiday restocking came earlier than in the previous years as the Chinse New Year in 2022 was also earlier when compared with the past, when the inventory rose in the same period in 2021.

The social inventory of lead ingots across Shanghai, Guangdong, Zhejiang, Jiangsu and Tianjin decreased 1,400 mt from last Friday January 7 and up 300 mt from Monday January 10, and stood at 91,900 mt as of January 14.

The goods for the delivery of SHFE 2201 lead has been delivered to the warehouses as this is the last week before the date of delivery, according to SMM research. The supply of lead ingot remained largely unchanged, and the downstream carried out routine restocking ahead of the Chinese New Year. The COVID-19 pandemic situation in Henan and Tianjin escalated, disrupting logistics (rising freights and less trucks available). Some traders had to cancel or postpone their delivery of orders, and the downstream consumers encountered more difficulties when sourcing from another province (e.g. it is difficult for a downstream manufacturer in Zhejiang to purchase lead ingot from Henan), hence they had to purchase from surrounding market including Shanghai and Jiangsu, resulting in a decline in the local and the overall inventories.

Looking into next week, the supply of primary lead is expected to be smooth, while the downstream will mostly take holidays. The market shall watch the progress of COVID in places like Henan and Tianjin, especially its impacts on logistics.

The SHFE/LME nickel price ratio hit a high of 7.55 at the beginning of the week, and the import and export window both re-opened, facilitating comparatively high import profits for traders. Meanwhile, the domestic nickel plate maintained high premiums. The aforementioned two factors prompted the nickel plate in the bonded zone to flow into the domestic market. In addition, the downstream rigid demand has been moderate, hence the nickel plate that enter the market has almost been digested.

Looking into the next week, the import and export windows shall re-open again in order to allow a smooth domestic spot market. However, as the downstream was less willing to purchase the high-priced pure nickel denominated in US dollars, the supplies may be transferred to the Europe where the demand has been robust and the premiums stand high. The domestic supply may tighten by then.

The arrivals of laterite nickel ore at ports were low. And the downstream has basically completed its restocking ahead of the Chinese New Year, hence the downstream purchasing interest was weak. The arrivals were mainly for orders that have already been placed. The port inventory of nickel ore stood low, and the consumption of imported ore also posed no surprises. 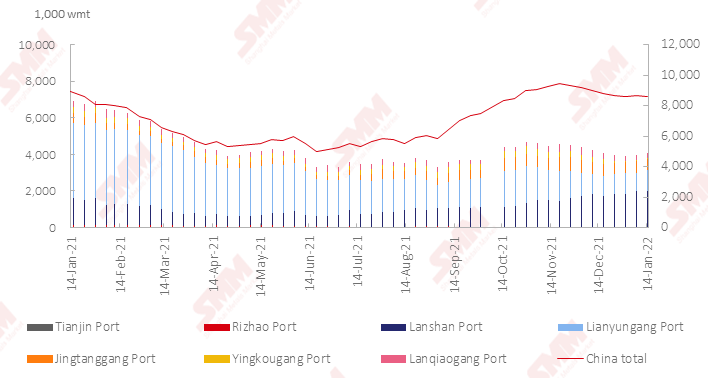 MOST POPULAR
1.Exclusive: China's Metals Output in December
2.China Weekly Inventory Summary and Data Wrap (Jan 14)
3.Silicon Metal Prices Dropped amid Weak Supply and Demand
4.Will the Rainstorm in Brazil Shore up Manganese Ore Prices?
5.China Weekly Inventory Summary and Data Wrap (Jan 21)
Shanghai Metals Market
Privacy PolicyCompliance CentreSMM Credit ServiceContact UsAbout UsTerms & ConditionsSitemap
Notice: By accessing this site you agree that you will not copy or reproduce any part of its contents (including, but not limited to, single prices, graphs or news content) in any form or for any purpose whatsoever without the prior written consent of the publisher.