CST
Source:SMM
This is a roundup of China's metals weekly inventory as of January 7.

SHANGHAI, Jan 7 (SMM) - This is a roundup of China's metals weekly inventory as of January 7.

As of Friday January 7, the copper inventory across major Chinese markets dropped 11,200 mt from Monday January 3 to 83,700 mt. The inventory was back to the downward trajectory after rising for only one week. Only Chongqing saw slightly added inventory this week, and the inventories dropped in the rest major markets, with Shanghai contributing most of the declines.

The operating rates of smelters dropped to varying degrees after the New Year’s Day, as they have maintained hectic production schedules in December. The copper imports that completed customs clearance dropped. And the demand picked up after the copper prices fell for several straight days.

Looking into next week, the copper imports and shipments from domestic smelters are expected to stand low, and the demand will be stable. Hence SMM believes that the inventory will keel falling.

Copper Inventory in China Bonded Zone Up 16,200 mt on Week

The copper inventories in the domestic bonded zones increased 16,200 mt from December 31 to 203,500 mt as of Friday January 7. The inventory rose more quickly.

The import window was still closed this week, and the import losses were mostly 700 yuan/mt. Hence the imports remained at a low level, the outflows from the bonded zone reduced on the week. On the other hand, however, the arrivals from overseas rose, leading to palpable increase in the inventory in bonded zones.


SMM data showed that China's social inventories of aluminium across eight consumption areas dropped 23,000 mt on the week to 776,000 mt as of January 6, mainly contributed by Shanghai, Wuxi, Nanhai and Gongyi. The social inventories dropped 25,000 mt from Monday January 3, mainly because the arrivals at the market dropped. Nonetheless, the arrivals was expected to pick up from next week until mid-January. 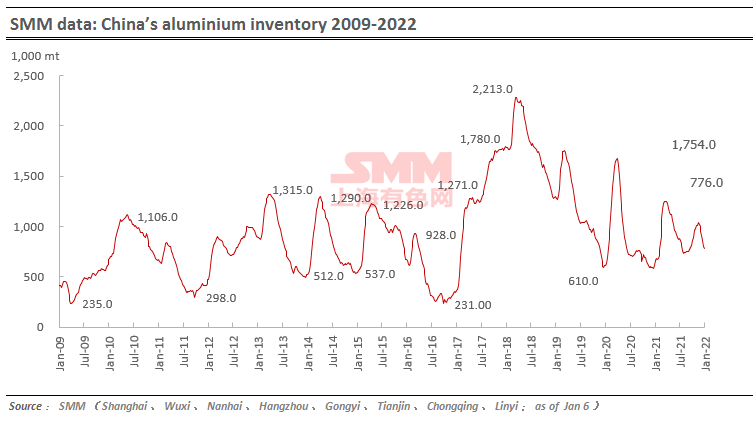 The inventories in the five major markets all rose on a weekly basis, with Foshan and Huzhou saw the greatest increase. The inventory in Foshan rose 14,700 mt or 38.89% on the week, while that in Huzhou added 10,000 mt or 71.43%. According to the warehouses, the aluminium billet arrivals were high recently. The downstream sector, however, generated less orders amid the upcoming Chinese New Year. The overall transactions of aluminium billet have been thin. 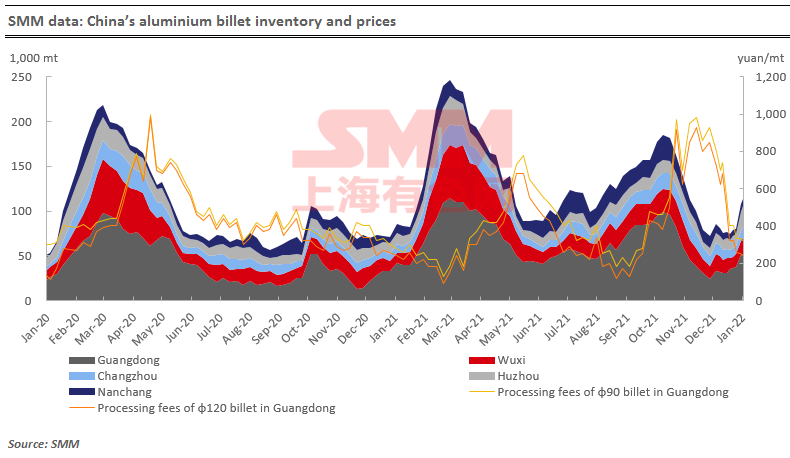 The inventory rose from the pre-New Year Day level, but dropped within the week. Specifically speaking, the inventory in Shanghai dropped palpably as the arrivals were at a low level amid less shipments from smelters. Guangdong saw less arrivals after the New Year’s Day holiday, and the downstream purchased on rigid demand; hence the inventory also declined slightly. In Tianjin, some smelters shipped their goods to east China, resulting in less market arrivals; the downstream has also been sluggish, leading to falling inventory.

In general, the combined inventories in Shanghai, Tianjin and Guangdong rose 4,900 from last Friday, and added 5,400 mt across the seven major markets.

The social inventory of lead ingots across Shanghai, Guangdong, Zhejiang, Jiangsu and Tianjin decreased 1,900 mt from last Friday December 31 and was flat over Tuesday January 4 as of January 7.

The downstream actively purchased on dips when lead prices dropped for several consecutive days. The inventories in Shanghai, Guangdong and Jiangsu continued to decline. Meanwhile, some SHFE 2201 contract goods were flowed to warrants as it was one week away from the delivery of this contract. Hence the inventories were flat as a whole within the week.

Looking into next week, the supply of primary and secondary lead is expected to rise slightly. The downstream still has some restocking demand before the Chinse New Year. However, the deliverable goods will keep flowing to the warehouses for delivery of SHFE 2201. Therefore, there is possibility that the lead ingot inventory will rise fractionally.

The SHFE/LME nickel price ratio bottomed out this week, and the import window re-opened, which improved the profitability of traders. However, the increase in bonded zone inventory was mainly contributed by nickel plant, which may extend into next week, and they are expected to flow to the domestic market directly in light of tight domestic supply. The spot premiums were at a high level.

Looking into next week, the market shall watch the imports of NORNICKEL nickel, and the premiums.

The social inventory of silicon metal across Huangpu port, Kunming city and Tianjin port decreased 1,000 mt from the previous week to 86,000 mt as of Friday January 7.

The inventory at Huangpu port and Tianjin port both declined slightly as the former saw less arrivals, while there were more outflows from the latter. The silicon metal transactions were sluggish as a whole based on the inflows into and outflows from the ports.

Looking into next week, the social inventory of silicon metal is likely to drop again as the factories in south-west China dropped and the restocking demand picked up before the Chinese New Year.

The arrivals at ports were low as the nickel ore exports from the Philippines were low in the rainy season. The NPI output in December and January was largely stable, and stood low due to environmental protection and year-end maintenance, leading to less demand for nickel ore. The nickel ore inventory is likely to drop slightly. 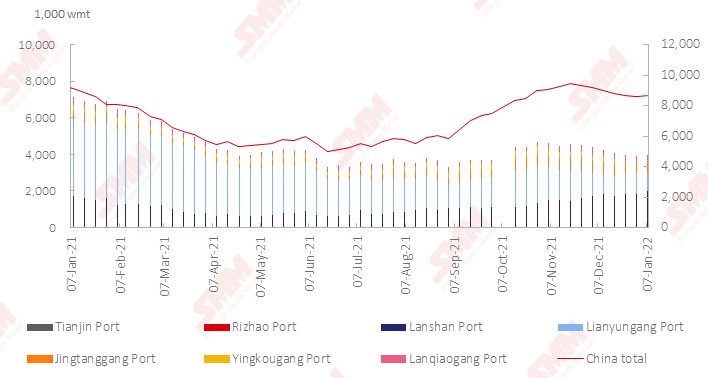 All
MOST POPULAR
1.Stricter Environmental Protection Policies in Producing Areas Likely to Prompt Up Magnesium Prices
2.China Weekly Inventory Summary and Data Wrap (Jan 14)
3.China Weekly Inventory Summary and Data Wrap (Jan 21)
4.High-carbon Ferrochrome Prices to Meet Pressures amid Production Restrictions and COVID
5.Silicon Metal Social Inventory Declined 2,000 mt on Week
Shanghai Metals Market
Privacy PolicyCompliance CentreSMM Credit ServiceContact UsAbout UsTerms & ConditionsSitemap
Notice: By accessing this site you agree that you will not copy or reproduce any part of its contents (including, but not limited to, single prices, graphs or news content) in any form or for any purpose whatsoever without the prior written consent of the publisher.