CST
Source:SMM
This is a roundup of China's metals weekly inventory as of October 22.

SHANGHAI, Oct 22 (SMM) - This is a roundup of China's metals weekly inventory as of October 22.

SMM data showed that China's social inventories of aluminium across eight consumption areas rose 70,000 mt on the week to 957,000 mt as of October 21, mainly because most consumption areas have seen more arrivals but sluggish demand. 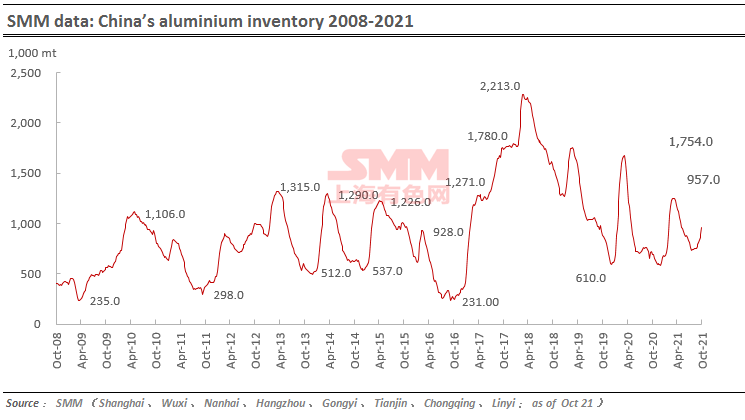 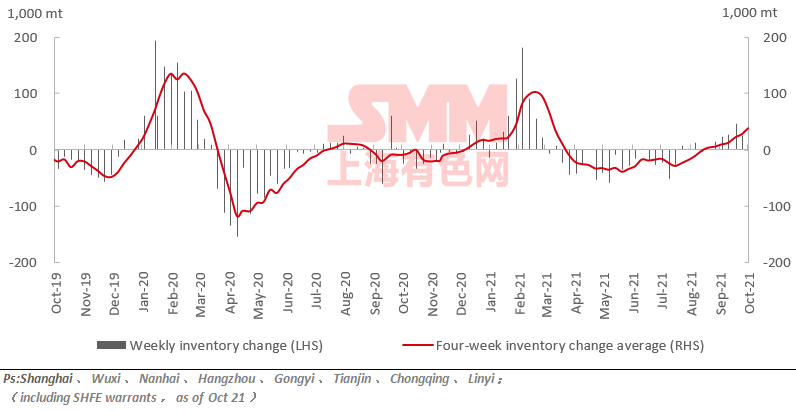 The stocks of aluminium billet in five major consumption areas dropped 3,200 mt to 181,200 mt on October 21 from last Thursday October 14, a decrease of 1.76%. The inventory fell for the first time after rising for 8 weeks in a row.

The decline was mainly contributed by Foshan (down 3,700 mt or 3.72%) and Nanchang (down 2,500 mt or 9.09%). While the inventory in Wuxi added by 2,800 mt or 11.43% on the week. According to SMM, the inventory of aluminium billet fell mainly because the arrivals shrank this week and the shipments picked up greatly yesterday as the aluminium prices plunged.

Going forward, the orders of downstream extruders were still unsatisfying, and the demand for aluminium billet was sluggish. While the warehouses reported that the arrivals are likely to be modest in the following session, thus the aluminium billet inventory will fluctuate mildly next week. 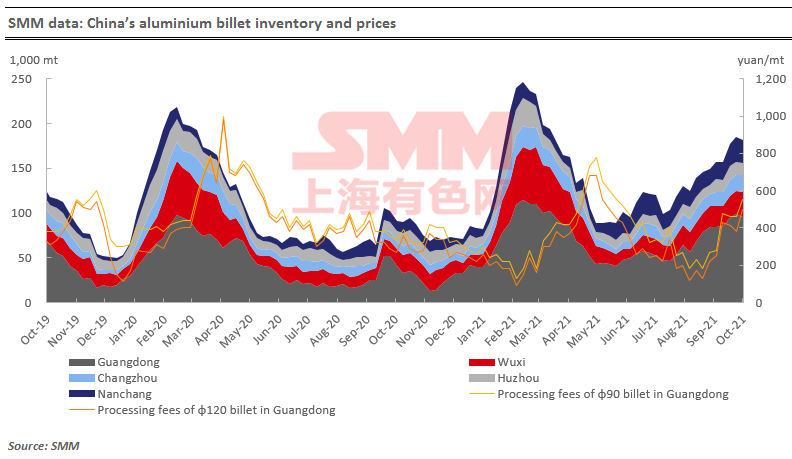 The social inventory of silicon metal across Huangpu port, Kunming city and Tianjin port increased 3,000 mt from the previous week to 61,000 mt as of Friday October 22.

The arrivals at the social warehouses in Kunming increased sharply this week, as the silicon plants held back cargoes near the dry season, and the transaction was thin amid the falling silicon prices. The arrivals and deliveries at Huangpu Port remained higher than that of Tianjin Port, and the arrival volume was lower than the delivery volume, so the inventory at Huangpu Port declined. The social inventory of silicon is expected to increase further next week.

The sharp drop in the volume of customs clearance for imported copper amid the poor import ratio this week are the main driver for the decrease in inventories in Shanghai and Guangdong. Due to the low local spot premium in Tianjin, smelters in the north shifted to deliver goods to east China, which lowered the inventory in Tianjin.

It is expected that the import volume next week will be slightly more than this week. However, domestic consumption is expected to weaken due to factors such as high premiums and copper prices and the approach of the month-end. As such, domestic inventories may increase slightly next week.

Copper inventories in the domestic bonded zones decreased 8,300 mt from October 15 to 237,200 mt as of Friday October 22, according to the most recent SMM survey.

The inventory in Shanghai rose sharply amid normal arrivals of goods and cautious restocking by downstream producers on price volatility. Guangdong saw a sharp increase in stocks as the volume of direct shipments from smelters to downstream decreased, which has arrived at warehouses.The stocks in Tianjin fell as the unloading capacity of railway platforms was tight, resulting in limited arrivals at warehouses, and downstream buyers still restocked cargoes. Inventories in Shanghai, Guangdong and Tianjin rose 7,000 mt, and inventories across seven Chinese markets increased 8,200 mt.

The lower premiums in the domestic spot markets combined with the two consecutive weeks of inventory increase lowered the SHFE/LME nickel price ratio early this week.

The import window closed at one point. However, due to the low domestic inventory and reverse arbitrage operation, the nickel price ratio trended higher. Over 1,000 mt of pure nickel arrived this week, and some companies moved the bonded zone inventories into the domestic market. Therefore, the overall inventory in the domestic bonded zone decreased.

The impact of the power rationing at NPI plants remained severe. Jiangsu issued a new power rationing notice this week. It is understood that the current operating rates in Guangxi, Guangdong, Jiangsu, Liaoning and other places are still low currently.

It is expected that nickel ore inventories still have room to rise before the rainy season. 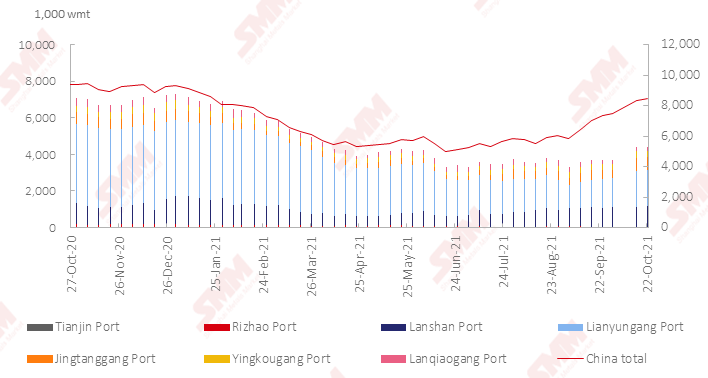 The primary lead smelters continued to conduct maintenance this week, and the production of primary and secondary lead in Henan and Anhui was restricted due to the power rationing. The lead consumption was relatively high, and the lead inventories dropped mainly in Jiangsu, Zhejiang, and other major lead consumption areas.

The power rationing will continue next week, and the primary lead smelters in Jiangsu will start maintenance. The lead ingot inventory is expected to keep falling.

The average operating rate across primary lead smelters in Henan, Hunan and Yunnan provinces dropped 1.89 percentage points from the previous week to 50.8% in the week ended October 22, showed an SMM survey.

Henan issued the power rationing notice this week. Jinli, Yuguang, Wanyang, Xinling, and Shibin have adjusted the production schedule to slightly cut the production. Yuguang Gold Lead has started feeding this Friday after the maintenance, and the daily output is expected to be affected by the power rationing. Yuteng in Hunan has received the notice of the second round of power rationing this week, but the refined lead output will not be affected. The output of silver and other by-products declined.

In addition, Xing’an Silver and Lead’s maintenance has completed in September, and the production will recover to normal. Jiangxi Copper has started the maintenance in October, and Jiangxi Jinde plans to conduct maintenance next week.

Chifeng Shanjin has resumed the production this week, but it has not reached the full capacity due to the power rationing.

The operating rates across the licensed smelters of secondary lead in Jiangsu, Anhui, Henan and Guizhou averaged 49.62% in the week ended October 22, down 6.55 percentage points from the previous week mainly due to the expanding power rationing, showed an SMM survey.

The operating rates across the secondary lead smelters are expected to decline amid the intensifying power rationing.

The average operating rate across lead-acid battery producers in Jiangsu, Zhejiang, Jiangxi, Hubei and Hebei provinces stood at 70.37% as of October 22, basically flat from the prior week.

According to SMM research, the power rationing continued to impact the production activities in Jiangsu and Zhejiang, with some producers still in suspension of production. Besides, some lead-acid battery producers in Shandong and Liaoning have been required to adopt staggered production amid short supply of coal-fired electricity in the heating season, and a few producers were already out of finished goods.

Lead Ingot Social Inventories Up 10,900 mt on Week
Social inventories of lead ingots across Shanghai, Guangdong, Zhejiang, Jiangsu and Tianjin expanded 10,900 mt from last Friday July 30 to 183,500 mt as of August 6. This was up 5,800 mt from Monday August 2 and registered a new high since April 2014.

China Weekly Inventory Summary and Data Wrap (Aug 6)
This is a roundup of China's metals weekly inventory as of August 6.

Aluminium Billet Inventories Up to 103,200 mt on Week
The outbound quantity of aluminium billet decreased 7,100 mt or 13.4% to 46,100 mt last week, as downstream purchase was quiet amid the surging aluminium prices.