SMM September 29th: the dollar showed a strong trend in early trading today. Powell said yesterday that economic growth "continues to strengthen", but the rise in inflation is likely to last longer than expected. Powell then said that the Fed almost met the conditions for the purchase of reduced-size bonds. The Fed has released hawkish voices in recent days, US bond yields have accelerated and the overnight dollar index has continued to jump to its highest level since early November 2020. Today, the dollar was highly volatile in early trading, and the metal market was mixed. Shanghai tin fluctuated higher in early trading. By around 09:30, Shanghai tin had narrowed its gains, recording a rise of 1.23%. Among the inner market metals, Shanghai aluminum rose 1.15%, while other metals fell, and Shanghai copper fell the most, with 1.11%.

On the black side, with the recent sharp rise in energy prices such as coal, crude oil and electricity, coupled with domestic power cuts that have led to restrictions on the start-up of enterprises in many places, market concerns about raw material supply are reflected in the futures market, which makes Shuangjiao strengthen again in early trading. With the exception of iron ore, the rest of the black series is red, and bicoke stainless steel is upstream one after another, with an average tension of more than 2%. At one point, coking coal rose more than 4% in morning trading. Compared with the inner disk, the outer disk trend is slightly inferior, as of 09:30, the outer disk metal only lun lead slightly floating red, up 0.63%.

On the copper side, yesterday the Federal Reserve released a series of hawkish voices, Powell said that the Federal Reserve almost met the conditions for downsized bond purchases. The overnight dollar index jumped to its highest level since early November. Copper futures have come down under pressure from a stronger dollar, uncertainty over the US debt ceiling, a sell-off and concerns about recent domestic power cuts. Shanghai Copper is expected to run today.

"when the macro mood is in a cold period, the copper pressure falls back. Yesterday, the spot water rose and fell off the cliff [minutes of the SMM Copper Morning meeting].

"Click to view the price of SMM copper products.

In terms of aluminum, the current aluminum price has entered a high fluctuation range, on the one hand, the market is mainly long, the risk sentiment is high, frequent in and out, aggravating price shocks; on the other hand, power production restrictions are extended to the downstream, superimposed weekly accumulation. previously, attention to the upstream electrolytic aluminum production limit trading logic began to loosen, long and short parties intensified the game. Yesterday, Ningxia, Qinghai and other electrolytic aluminum enterprises received notice of power cuts, followed by production reduction expectations, overnight long positions, Shanghai Aluminum stopped falling and rebounded, supply-side production restrictions continued, Shanghai Aluminum maintained a high concussion market in the short term.

"Click to view the price of SMM aluminum products

In terms of lead, in terms of fundamentals, local power cuts continued, lead supply and demand fell, while the fourth round of storage began to involve copper, aluminum and zinc, although it did not involve lead, but to a certain extent ease the tension of domestic supply. In addition, the stock of the traditional downstream practice before the National Day is coming to an end, and according to the survey, there are generally more downstream holidays than refineries during the National Day, and the industry is worried about post-holiday accumulation. It is expected to be in stock today.

"Today, we will follow the speeches of officials from many countries and the trend of lead prices falling in both supply and demand [minutes of SMM lead Morning meeting]

"Click to view the price of SMM lead products

In terms of zinc, from a fundamental point of view, the stock of Seven places Society is still in a state of continuous accumulation. As of Monday, the total inventory of SMM seven zinc ingots was 131300 tons, an increase of 2100 tons compared with last Friday. However, due to the frequent changes of double control and power restriction policy and the influence of superimposed dumping factors, the disturbance of both supply and demand is enhanced. However, inventories are still in a relatively historical position and will provide bottom support for zinc prices.

"the US debt crisis is unresolved. Zinc prices are low. [minutes of SMM Zinc Morning meeting]

"Click to view the price of SMM zinc products

Tin, the trend of yesterday's night market opened slightly and then fluctuated higher, and the bulls took the initiative in the performance of funds. Fundamentally, the impact of power restriction and production restriction is still continuing, and the impact of this power restriction on the upstream is less than that of the downstream, so it has caused the market expectation of weakening demand in the short term only from the perspective of power restriction. On the market trend, as mentioned in yesterday's morning news, the bears in this round of price fall show a lack of strength. Therefore, after the price has been slightly adjusted at the 270000 yuan / ton integer mark, the bulls will push up the price again. To sum up.

"Click to view the price of SMM tin products

In terms of nickel, the Shanghai Nickel 2111 contract has fallen below 140000 yuan / ton, far away from the multi-track moving average and gradually approaching the lower track of the Boll line. The impact of power cuts led to weak spot demand, and near the holiday, the market wait-and-see mentality is strong, so it is expected that Shanghai nickel is still weak shock, pay attention to the support situation near the lower rail level.

"Click to view the price of SMM nickel products

In terms of iron and steel, the volume of imported ore to Hong Kong began to pick up this period, and the port volume of Australia and Brazil continued to increase; while domestic reduction and production restrictions continued, blast furnaces of many steel mills were affected to carry out maintenance one after another, and the output of hot metal was still expected to decline. Especially recently, Wu'an City issued an environmental protection notice, a number of steel mills blast furnaces are all stuffy, local steel mills purchase willingness to significantly decline. Iron ore fundamentals continue to weaken, and mineral prices may be at risk of falling after the enthusiasm for restocking before the National Day.

"Click to view the price of SMM steel products 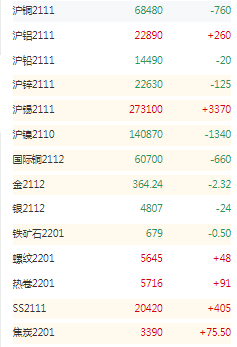 SMM Morning Comments (Nov 29): Base Metal Closed with Losses after Discovery of New COVID-19 Variant
Shanghai base metals basically trended lower on Monday morning amid risk aversion sentiments after the discovery of a super strong variant of COVID-19 was discover last Friday. Meanwhile, their counterparts on LME all cruised higher.

SMM Morning Comments (Oct 28): Base Metals Fell across the board under Government Curb on Coal Prices
Shanghai base metals all trended downward after opening on Thursday morning amid risk aversion sentiments and China’s curb on the coal prices. Meanwhile, their counterparts on LME all went down.

SMM Morning Comments (Sep 30): Base Metals Fell across the Board amid Thin Trade
Shanghai base metal fell across the board on Thursday morning amid the sluggish transaction on the last trading day before the National Day long holiday. Meanwhile, their counterparts on LME trended mixed.

SMM Morning Comments (Sep 29): Base Metals Mostly Fell amid Weakened Demand
Shanghai base metals mostly fell after Fed’s hawkish statements and amid the weakened demand before the China’s National Day holiday. Meanwhile, their counterparts on LME basically fell as well.

SMM Morning Comments (Aug 18): Shanghai Base Metals Trending Lower in Cooled Market Sentiments
Shanghai base metals mostly went down on Wednesday morning amid the cooled down market sentiments by the uncertainty of economic recovery. Meanwhile, their counterparts on LME all increased.

SMM Morning Comments (Aug 3): Shanghai Base Metals Mostly Slid on Tuesday Morning following the lower ISM data
Shanghai base metals basically trended lower after opening on Tuesday morning, as the lower than expected US ISM data drove up the bearish sentiment in the market. Meanwhile, their counterparts on the LME mostly fell as well.

SMM Morning Comments (Aug 2): Shanghai Base Metals Mostly Trending Mixed ahead of Final PMI Values
Shanghai base metals trended mixed on Monday morning as the market awaiting final PMI values of manufacturing and service industries, and US monetary policy is expected to remain dovish. Meanwhile, their counterparts on LME were trading mixed.

MOST POPULAR
1.Macro Roundup (Nov 24)
2.Macro Roundup (Nov 29)
3.Macro Roundup (Dec 2)
Shanghai Metals Market
Privacy PolicyCompliance CentreSMM Credit ServiceContact UsAbout UsTerms & ConditionsSitemap
Notice: By accessing this site you agree that you will not copy or reproduce any part of its contents (including, but not limited to, single prices, graphs or news content) in any form or for any purpose whatsoever without the prior written consent of the publisher.