CST
Source:SMM
[SMM in-depth analysis: local power restrictions push up commodity prices under the background of dual-carbon energy consumption "double-control" VS to maintain stability commodity prices] it is possible that renewable energy will begin to rise, and new industries will inevitably shift from high-carbon to low-carbon, which means that whoever can establish the largest new energy production and consumption network in the future will be able to dominate the next round of new industrial system. The industry pain caused by rising commodity prices is the only way for China to move from local optimization to global optimization.

SMM9 March 21: since China set the goals of 2030 carbon peak and 2060 carbon neutrality (hereinafter referred to as "double carbon target"), local double control policies on energy consumption have been gradually increased. The imbalance between supply and demand of commodities caused by power cuts has led to a rapid rise in prices, a substantial increase in manufacturing costs, and constant complaints from enterprises.

Today we are going to discuss the priorities between the "double control" of energy consumption under the dual-carbon target and the price of stable commodities.

1. What is the "double control" of energy consumption?

The implementation of "double control" action on the total amount and intensity of energy consumption is an important measure to promote the construction of ecological civilization and solve the tightening of resource constraints and serious environmental pollution, which can save energy and resources and reduce pollutants and greenhouse gas emissions from the source. it can also force the transformation of the mode of economic development and improve the green level of China's economic development.

two。 What is the early warning mechanism?

The National Development and Reform Commission implements the "red, yellow and green" light early warning mechanism for the "double control" of energy consumption in all provinces, municipalities and autonomous regions. The details are as follows:

The red light is a first-level warning, indicating that the situation is very serious, which refers to the areas where the double control progress target has not been achieved, and the gap between the actual value and the target value is greater than 10% of the target value.

The yellow light is a second-level warning, indicating that the situation is grim, which refers to areas where the double control progress target has not been achieved and the gap between the actual value and the target value is less than 10%. 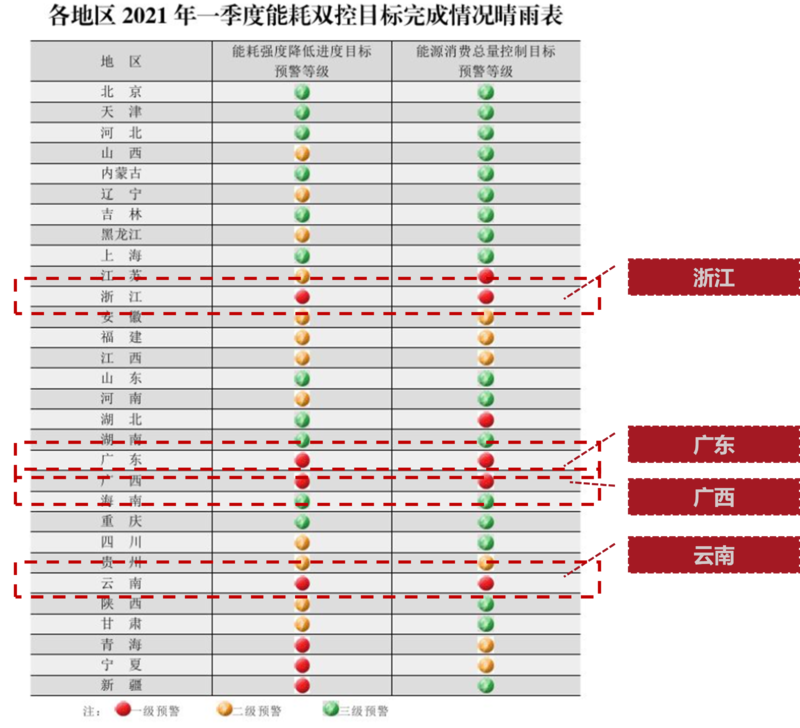 From the point of view of the completion in the first quarter, Zhejiang, Guangdong, Guangxi and Yunnan are the first-level early warning.

According to the barometer on the completion of double control targets of energy consumption in various regions in the first half of 2021 issued by the General Office of the National Development and Reform Commission on August 17, the reduction of energy consumption intensity, nine provinces (regions) in Qinghai, Ningxia, Guangxi, Guangdong, Fujian, Xinjiang, Yunnan, Shaanxi and Jiangsu are first-level early warning. In terms of total energy consumption control, eight provinces (regions) of Qinghai, Ningxia, Guangxi, Guangdong, Fujian, Yunnan, Jiangsu and Hubei are first-level early warning.

Compared with the completion in the first quarter, double red light areas increased from four provinces to seven provinces, of which Qinghai and Ningxia turned on red lights for the first time; Yunnan and Guangxi showed red lights for two consecutive times. 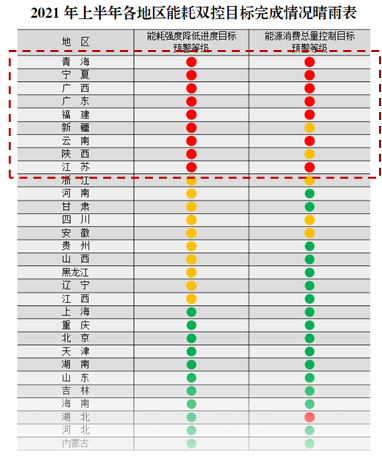 According to current statistics, 13 cities (districts) have announced power restriction policies under the influence of energy consumption control targets: 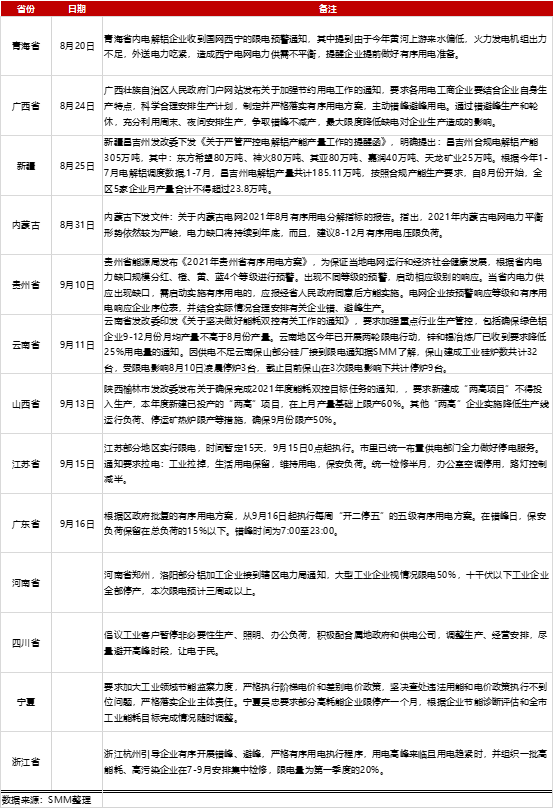 3. the negative impact of imported inflation plus local power cuts and increases in the manufacturing industry.

Ample liquidity in the post-epidemic era pushed up commodity prices, while "double controls on energy consumption" pushed prices up again. The prices of industries with high energy consumption, such as magnesium, silicon, aluminum and chemical industry, have risen by 50-200%.

From the perspective of the current policy, the intensity of double control of energy consumption is difficult to see signs of relaxation in the short term, and prices are soaring.

If China wants to become the world's largest manufacturing power, China must win the battle of dual-carbon transformation.

In 2020, at the general debate of the 75th session of the United Nations General Assembly, China proposed to achieve the carbon peak commitment by 2030. At the climate ambition summit, President Xi Jinping further announced: "by 2030, carbon dioxide emissions per unit of GDP in China will be more than 65 per cent lower than in 2005, and non-fossil energy will account for about 25 per cent of primary energy consumption. forest storage will increase by 6 billion cubic meters over 2005, and the total installed capacity of wind and solar power will reach more than 1.2 billion kilowatts." 2030 carbon peak and 2060 carbon neutralization (hereinafter referred to as "double carbon goal") demonstrate China's firm determination to deal with climate change and will bring about profound changes in China's economic structure and mode of economic and social operation. the scope of environmental regulation will be further expanded from high-pollution industries to high-emission industries, which will greatly promote the cleanliness and greening of China's industrial chain in the next 40 years.

The strategic significance of the double carbon goal to our country:

The climate problem is a problem that all countries in the world have to face, and China is no exception. The rise of sea level and the increase of extreme weather have a great impact on our production and life. At present, countries that account for 75% of the world's total GDP and 65% of carbon emissions have put forward their own long-term goals of "carbon neutralization".

China accounts for 1/3 of global carbon emissions. Therefore, in the construction of a new global governance system, China should participate in this plan to reflect the responsibility of great powers. 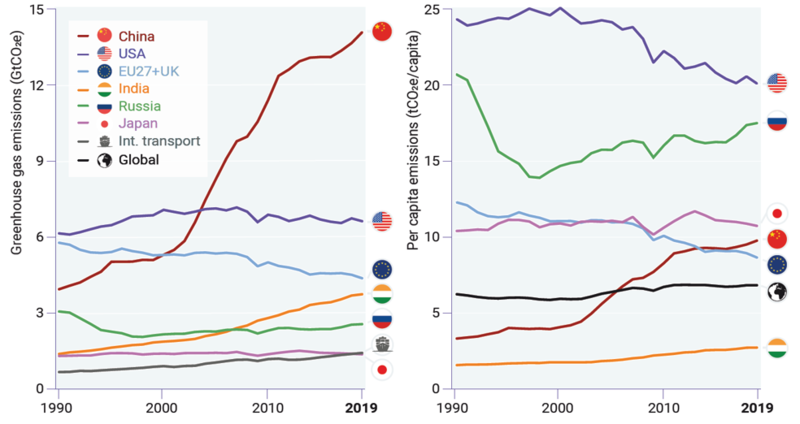 China's energy structure is mainly high-carbon fossil energy, which accounts for about 85%, while China's oil and coal supply is heavily dependent on imports, and the problem of resource constraints is serious. In addition, oil and coal are strongly tied to the US dollar. Once resource sanctions, imported inflation games and financial capital speculation occur, they will have a great impact on China's manufacturing industry.

As a big manufacturing country, the export scale of manufacturing industry in China is expanding rapidly, but the level of specialization based on market, R & D and management is still low, which can not pose an export threat to the developed economies of Europe and the United States. At present, China is in a situation where "strong manufacturing", "weak management" and "weak R & D" coexist, so the transformation and upgrading of the manufacturing industry is an inevitable trend. The low-carbon transition dividend brought by the dual-carbon goal provides an excellent opportunity for China's manufacturing industry to accelerate upgrading and overtake around the corner. China is likely to change from a big energy importer to a big exporter of new energy manufacturing. Among them, the trend of new energy vehicle industry has appeared, and the future photovoltaic cell, energy storage battery, silicon wafer and other industries will also become China's "strong manufacturing" pattern one after another.

4. Who will be dominant in this energy revolution and who will dominate the new industrial system in the next round

In the first industrial revolution of the 18th century, with the emergence of steam engines and coal instead of firewood, Britain benefited most from this energy revolution. From 1770 to 1860, Britain established the largest coal industry and the entire modern industrial system.

In the 19th century, oil and electricity became the driving forces of the second industrial revolution, in which the United States benefited most. In the 100 years from 1910 to 2010, the United States established the world's largest modern Electroweb and oil and gas industry. The whole modern industrial system has also been established. In the past, every round of energy change was accompanied by the new industrial revolution, and some countries were bound to receive dividends. Today, renewable energy may begin to rise, and the new industry is bound to shift from high-carbon to low-carbon, which means that whoever can establish the largest new energy production and consumption network in the future will be able to dominate the next round of new industrial system. This is why China must win the battle of dual-carbon transformation.

Therefore, the industry pain caused by rising commodity prices is the only way for China to move from local optimization to global optimization.

All
MOST POPULAR
1.Exclusive: China's Metals Output in September
2.China Will Continue to Increase Supervision of Futures and Spot Markets to Curb Excessive Speculation
3.Chinese Supervision Authorities See Little Impact from Evergrande Default
4.Macro Roundup (Oct 19)
5.Macro Roundup (Oct 20)
Shanghai Metals Market
Privacy PolicyCompliance CentreSMM Credit ServiceContact UsAbout UsTerms & ConditionsSitemap
Notice: By accessing this site you agree that you will not copy or reproduce any part of its contents (including, but not limited to, single prices, graphs or news content) in any form or for any purpose whatsoever without the prior written consent of the publisher.