According to multiple interviews with reporters of the Financial Associated Press, Jiangsu's "dual control of energy consumption" has been upgraded in many places. in addition to power cuts, some heavy industrial enterprises in Xuzhou, Taizhou, Nantong, and other places in Jiangsu Province have received notices to reduce or stop production, and the end time for production reduction and suspension is partly at the end of September and partly after the National Day holiday. From the perspective of industry, high energy-consuming industries such as iron and steel, cement and chemical industry are greatly affected. In addition, some photovoltaic enterprises told the Financial Associated Press that part of the Jiangsu plant has received a notice of production reduction, and does not rule out further production suspension requirements in the future.

To this end, a number of hard measures have been introduced to ensure that the target of double control of energy consumption for the whole year is achieved.

According to the information released by Longzhong Information, recently, different areas in Jiangsu Province have received a series of notices to limit electricity and production. Among them, Wuxi, Xuzhou, Nantong, Lianyungang, Huaian, Yancheng, Zhenjiang, Taizhou, Suqian and other nine first-level early warning areas where energy intensity rose instead of decreasing in the first quarter are more stringent.

A reporter from the Financial Associated Press learned from Xuzhou that some heavy industrial enterprises in Xuzhou have recently received notices to limit and stop production. According to the information obtained and verified by the reporter, Jiangsu Xugang Iron and Steel Group issued a notice on September 16 that in order to complete the group's "double control" target management with high standards and high quality, the company decided to suspend production for half a month from now; Jiangsu Huachang Aluminum Plant Co., Ltd. decided to suspend production from September 18 to September 30. 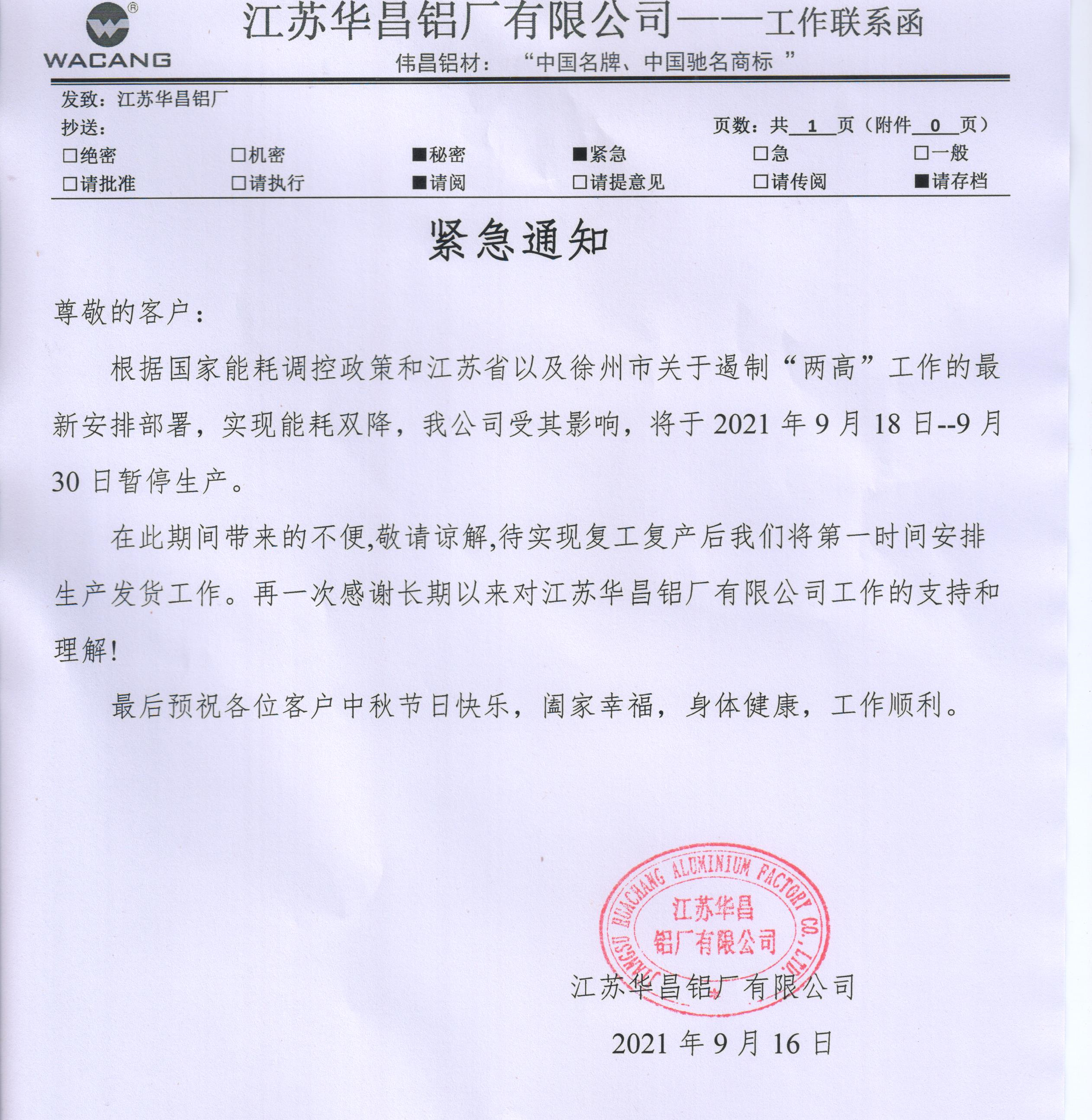 The same situation also occurred in Nantong. A person in charge of an industrial enterprise in Nantong told the Financial Associated Press that some enterprises in Nantong, including the company, had also received notices to limit production and stop production. The enterprises that received the notice were mainly chemical and machinery equipment manufacturing enterprises, and production could be resumed after National Day.

Taizhou is an area where it is recently rumored that "city-wide industrial enterprises" have stopped production, but a reporter from the Financial Associated Press verified to a number of local listed companies that the company has received a proposal for power restriction issued by the management committee, which is mainly implemented through measures such as turning off air conditioners. The company has not received the official document requesting to stop production, and at present, the factory area is in normal production and operation. However, some small businesses around have received notices to stop production and limit production.

According to a notice received by some enterprises in Dainan Town, the largest town of Xinghua in Taizhou, obtained by a reporter of the Financial Associated Press, "production will be suspended from 00:00 today to October 8, and no electricity will be used."

From an industry point of view, the affected industries include cement, steel mills, chemical and photovoltaic enterprises.

Miao Yingying, an analyst at Longzhong Information, learned that 14 of the 37 cement clinker kilns in Jiangsu have stopped production due to "double control" of energy consumption. Among them, there are more clinker production in Wuxi, Zhenjiang and other places due to stricter control. On the whole, the current production limit of cement enterprises in many places in Jiangsu is about 30%, 50%.

In addition, some photovoltaic backplane enterprises and silicon enterprises told the Financial Associated Press that the Jiangsu plant did not receive a notice to stop production, but received a notice to reduce production and could not resume until after the National Day, but did not rule out further requirements for stopping production later.

Jiangsu to move steel mills to coast, push industrial concentration
By 2020, the province aims to cut the number of steel mills from the current 45 to 20

Tangshan imposes more output cuts on pollution concerns
In an emergency response to the heavily-polluted weather in the Beijing, Tianjin and Hebei area this week, Tangshan city has initiated measures to cut emissions from 20:00 on Sunday April 16.

All
MOST POPULAR
1.Exclusive: China's Metals Output in September
2.China Will Continue to Increase Supervision of Futures and Spot Markets to Curb Excessive Speculation
3.Chinese Supervision Authorities See Little Impact from Evergrande Default
4.Macro Roundup (Oct 19)
5.Macro Roundup (Oct 20)
Shanghai Metals Market
Privacy PolicyCompliance CentreSMM Credit ServiceContact UsAbout UsTerms & ConditionsSitemap
Notice: By accessing this site you agree that you will not copy or reproduce any part of its contents (including, but not limited to, single prices, graphs or news content) in any form or for any purpose whatsoever without the prior written consent of the publisher.