CST
Source:SMM
Inventories of rebar across Chinese steelmakers and social warehouses stood at 11.17 million mt as of September 2, down 75,100 mt or 0.7% from a week earlier, according to SMM data.

SHANGHAI, Sep 3 (SMM) – The rebar output increased by 2.2% week on week as some steel mills resumed production after maintenance, and apparent demand of rebar increased by 0.03% from the previous week.

Steel prices fluctuated widely this week, and the overall end demand recovered. The social inventories dropped most sharply in east China, ad the end demand rebounded intensively after the pandemic was controlled, and the local speculative transactions were active, with more downstream purchase at lower prices. The social inventories also declined slightly in north-west, south-west, and north-west China. 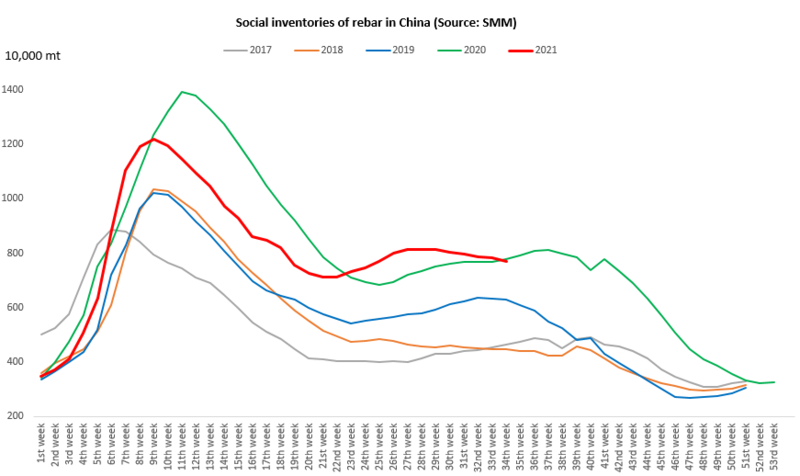 Rebar inventories continued to rise this week and weighed on the supply side. The apparent demand remained flat in early September. The average apparent demand in August was estimated to drop 13% from the same period last year. In the short term, demand is still recovering in margins slowly, and inventories will continue to decline slowly. In the medium and long term, domestic production restrictions are strict, and output increments will be limited. After demand picks up, inventories will drop rapidly.

All
MOST POPULAR
1.China HRC Inventory Rose 49,000 mt on Week
2.China Rebar Stocks Up 412,500 mt on Week
3.China HRC Inventory Rose 3,600 mt on Week
4.Spot stainless Steel Prices in Foshan Rose More than Expected
5.Coke Prices Are Hiked by 3 Rounds in 10 Days
Shanghai Metals Market
Privacy PolicyCompliance CentreSMM Credit ServiceContact UsAbout UsTerms & ConditionsSitemap
Notice: By accessing this site you agree that you will not copy or reproduce any part of its contents (including, but not limited to, single prices, graphs or news content) in any form or for any purpose whatsoever without the prior written consent of the publisher.