CST
Source:SMM
This is a roundup of China's metals weekly inventory as of August 6.

SHANGHAI, Aug 6 (SMM) - This is a roundup of China's metals weekly inventory as of August 6.

Copper Inventories Up 15,100 mt from Monday

SHANGHAI, Aug 6 (SMM) - SMM data showed that copper inventories across mainstream areas in China climbed 15,100 mt from this Monday to 171,000 mt as of Friday August 6.

Domestic overall inventories increased for two consecutive periods, and re-stocking was seen for the first time since May 21. Re-stocking of this week was mainly the result of large imports and decreased consumption in east China due to pandemic. According to SMM, there will be considerable inflow of copper imports after customs clearance. If consumption remains weak, domestic inventories are likely to further increase.

SMM data showed that the stocks of copper in Shanghai bonded areas fell 17,500 mt from last Friday July 30 to 392,100 mt as of August 6, falling for four consecutive weeks.

Profits of imported spots have created demand from foreign trade market, and the buyers were actively seeking warehouse warrants and recent B/L arrived at ports. Premiums of Yangshan copper climbed greatly, and increased clearance at customs has resulted in continuous de-stocking in the bonded areas.

Social inventories of silicon metal across Huangpu port, Kunming city and Tianjin port shrank 2,000 mt from the previous week to 4,000 mt as of Friday August 6.

The outbound volumes of silicon exceeded the inflow at Huangpu Port and Tianjin Port amid intensive shipments for export orders, so the overall inventories in the two ports declined this week. The inventory in Kunming increased slightly in the wet season.

The social inventories of silicon is expected to keep rising next week after the intensive deliveries and the production resumption in northern major factories.

Overall domestic social inventories increased slightly from last week. Among them, inventories in Shanghai climbed up due to decreased demand as the downstream was consuming released government reserves; Guangdong hit new low in the year as a result of disrupted arrivals caused by power & production restrictions at smelters; Tianjin shrank because of rebounded steel prices and improved downstream order book.

In conclusion, social inventories in Shanghai, Guangdong and Tianjin increased 100 mt, while inventories across seven markets up 1300 mt.

Social inventories of lead ingots across Shanghai, Guangdong, Zhejiang, Jiangsu and Tianjin expanded 10,900 mt from last Friday July 30 to 183,500 mt as of August 6. This was up 5,800 mt from Monday August 2 and registered a new high since April 2014.

Under the pandemic control, the transportation in some medium- and high- risk regions in Jiangsu was impeded. The sales and purchase of some companies in Yangzhou and Gaoyou were affected because the transportation of lead ingot and lead-acid battery was hindered. Therefore, the battery companies reduced purchase on raw materials.

At the same time, lead smelters and holders continued to deliver goods to social warehouses, and the inventories increased significantly in the warehouses in Shanghai and Jiangsu.

The inventories in Guangdong declined as most secondary lead smelters reduced or suspended production amid the environmental protection inspections.

The supply of lead ingot will stand stable next week, and the consumption is mild despite the traditional peak season. Lead ingot social inventories are expected to further increase.

Operating Rates of Primary Lead Smelters Down 2.03% on Week

Operating rates across primary lead smelters in Henan, Hunan and Yunnan provinces lost 2.03 percentage points from the previous week to 57.4% in the week ended August 6, showed an SMM survey.

In Henan, Xinling has not recovered from the power curtailment, and the production of refined lead decreased slightly. Wanyang’s output declined slightly due to the power rationing in end-July.

Anhui Tongguan will resume production this weekend after the maintenance.

Xing’an Silver Lead in Inner Mongolia may conduct maintenance in late August, before which it will maintain normal production.

Operating Rates of Secondary Lead Smelters Up 0.05% on Week

Operating rates across licensed smelters of secondary lead in Jiangsu, Anhui, Henan and Guizhou averaged 64.50% in the week ended August 6, up 0.05 percentage point from the previous week, showed an SMM survey.

Anhui Dadao’s production increased after partly resuming operation from the maintenance, and Henan Jinli’s production was slowed down due to the power curtailments.

Besides the sample companies, the output of some regions in Jiangxi declined amid the power restrictions, and the purchase of lead-acid battery scrap tightened in the pandemic. Some smelters in Inner Mongolia suspended production.

Anhui Dadao will continue to resume production next week, and some regions in Hebei are expected to raise production in the peak season of consumption. The operating rates of secondary lead smelters are likely to rise.

Operating Rates of Lead-acid Battery Plants Up 0.14% on Week

The lead-acid battery market has gradually entered the traditional peak season, and some companies increased production amid more orders.

Electric bicycle battery companies were the main force to increase production, while car battery market companies saw both increase and decrease in production. On one hand, some car battery companies reduced production to relieve the inventory pressure, as the domestic replacement demand was low, and the battery exports were affected by the rising freight rates and longer shipment period. On the other hand, some companies focusing on domestic market increased production in August for the traditional peak season.

In addition, the pandemic prevention policy in Jiangsu has been upgraded. If vehicles have passed middle and high-risk areas such as Yangzhou and Nanjing, they will be disinfected or required to return. The production and transportation of some lead-acid battery companies in this area will be affected to a certain extent.

Therefore, the operating rates only rose slightly on the week.

Pick up of nickel ore were frequent at ports, which led to further decrease of inventories. However, production demand of iron companies was still unfulfilled amid the peak of nickel ore delivery, and re-stocking at ports slowed down. It could be observed that recent nickel demand and supply was generally tight as a result of further increased nickel ore mainstream prices against stabilised ferronickel prices.

Based on the current inventory level, nickel ore inventories across all Chinese ports are unlikely to reach 8 million wmt ahead the rainy season. SMM data showed that China's social inventories of aluminium across eight consumption areas fell 26,000 mt on the week to 732,000 mt as of August 5.

The decrease was mainly due to the low arrivals in Gongyi and Hainan. The arrivals in Henan was also affected by the inefficient truck transportation in the pandemic. 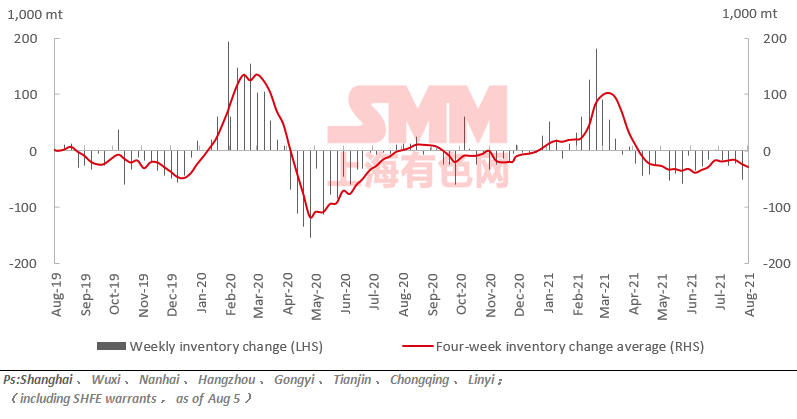 Aluminium Billet Inventories Up to 103,200 mt on Week

The outbound quantity of aluminium billet decreased 7,100 mt or 13.4% to 46,100 mt last week, as downstream purchase was quiet amid the surging aluminium prices.

The stocks of aluminium billet in five major consumption areas increased by 4,200 mt to 103,200 mt from the previous week, a slight increase of 4.2%.

Aluminium stocks rose this week in all areas except for Foshan and Nanchang, and Huzhou saw a significant increase of 4,000 mt or 57% on the week. 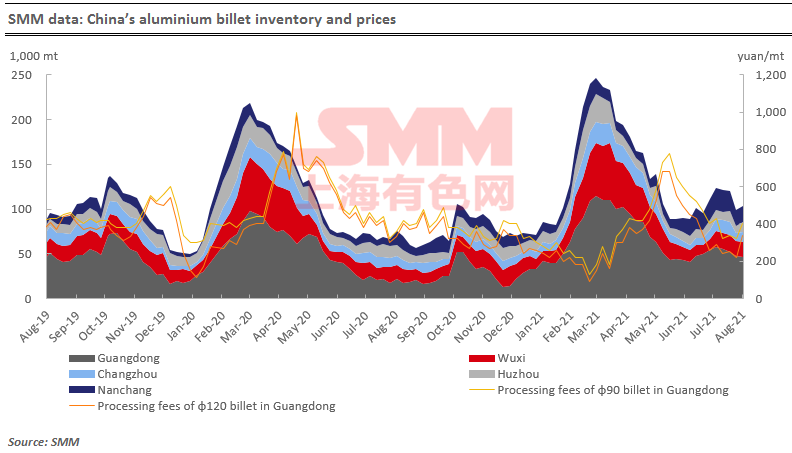 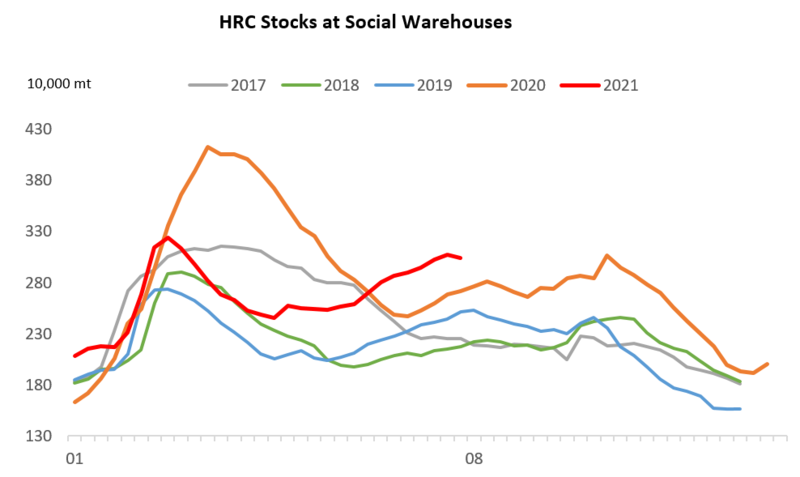 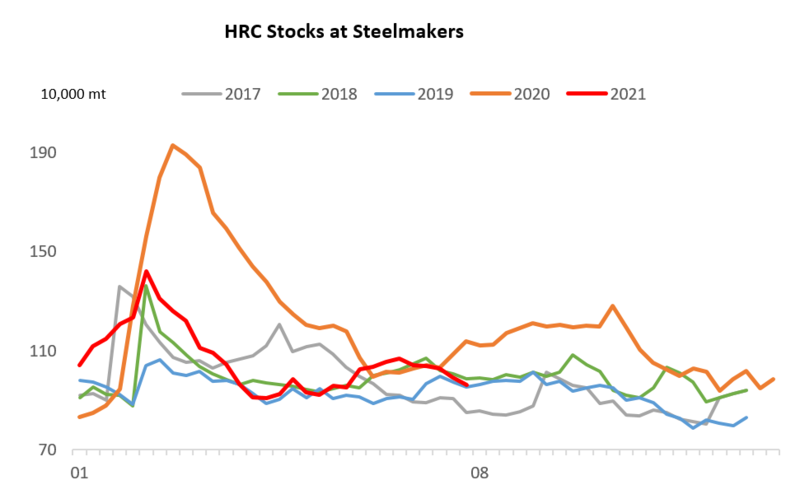 Operating Rates of Blast Furnaces across Chinese Steelmakers Down 0.1% on Week

Steel output has reached a low level, but the production restrictions remain tight. The rebar output declined significantly, as the steel mills chose to mainly produce HRC for the higher profits. Operating rates of blast furnaces are expected to stay stable next week. 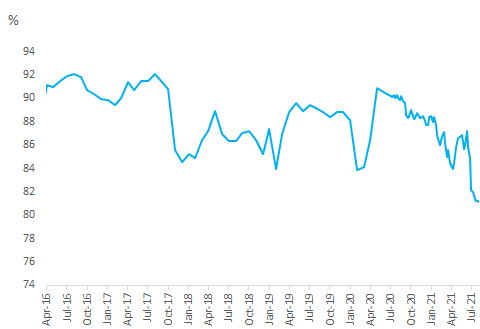 China Weekly Inventory Summary and Data Wrap (Oct 22)
This is a roundup of China's metals weekly inventory as of October 22.

Operating Rates of Lead-Acid Battery Plants Up 0.06% on Week
Operating rates across lead-acid battery producers in Jiangsu, Zhejiang, Jiangxi, Hubei and Hebei provinces inched up 0.06 percentage point from August 20 to 69.72% as of Friday August 27.

Operating Rates of Secondary Lead Smelters Down 3.32% on Week
Operating rates across licensed smelters of secondary lead in Jiangsu, Anhui, Henan and Guizhou averaged 61.18% in the week ended August 13, down 3.32 percentage points from the previous week, showed an SMM survey.