CST
Source:SMM
This is a roundup of China's metals weekly inventory as of July 30.

SHANGHAI, Jul 30 (SMM) - This is a roundup of China's metals weekly inventory as of July 30.

Stocks in Shanghai continued to rebound as a result of added arrivals and downstream taking in released government reserves; Guangdong saw slightly increased arrivals and purchasing on rigid demand from downstream, therefore stocks added slightly; Stocks in Tianjin shrank further because of disrupted arrivals due to maintenance at some smelters and improved order book amid rally in steel prices. In conclusion, stocks across the three major trading hubs (Shanghai, Tianjin and Guangdong) shrank 900 mt this week, but increased 100 mt across the seven regions in China.

Social inventories of silicon metal across Huangpu port, Kunming city and Tianjin port expanded 2,000 mt from the previous week to 42,000 mt as of Friday July 30.

The increment was mainly due to the higher arrivals at Huangpu port for the exports in August. The total inventory in Kunming and Tianjin port was unchanged. Social inventories of silicon are expected to remain stable in the short term.

The supply of secondary lead ingot kept increasing this week, and lead prices fell back from high levels. The secondary lead smelters actively delivered cargoes early in the week, and the discounts of secondary refined lead expanded to 700 yuan/mt over the average price of SMM 1# lead, which suppressed the trade of primary lead.

At the same time, the price difference remained above 300 yuan/mt, making holders highly willing to deliver goods to warehouses. Tianjin and Zhejiang both saw significant increase in social inventories.

Lead-acid battery consumption is expected to stay stable next week, and downstream users will maintain the purchase on rigid demand. Meanwhile, new secondary lead capacities will be released, and the social inventories of lead ingots are expected to rise further.

Anhui Dadao’s production increased after partly resuming operation from the maintenance, and Henan Jinli basically resumed production after the power curtailment, bringing the major increment to the production.

Besides the sample companies, Tongliao Taiding in Inner Mongolia and Xincheng Power in Henan suspended production for lack of raw materials this week.

Operating rates across lead-acid battery producers in Jiangsu, Zhejiang, Jiangxi, Hubei and Hebei provinces stood largely flat at 69.41% on the week as of Friday July 30.

The lead-acid battery market has gradually entered the traditional peak season, and orders from manufacturers have improved. Most companies chose to digest inventories first, so the production did not increase significantly.

On the other hand, the exports stood low against the growing domestic demand. The ships to Africa, Europe, and US were in shortage, which drove up the prices of containers. The rising costs suppressed the battery exports, and the operating rates of some companies in Guangdong were between 50-60%.

Some companies are planning to increase production next week for the peak season in August, and the operating rates may go up.

Operating rates across primary lead smelters in Henan, Hunan and Yunnan provinces lost 1.35 percentage points from the previous week to 59.4% in the week ended July 30, showed an SMM survey.

In Hunan, Yuteng halted production for maintenance this week, and is expected to recover operation next week. Shuikoushan Jinxin slightly reduced its production due to equipment failure.

Anhui Tongguan was still in maintenance, likely to resume production next weekend.

Xing’an Silver Lead in Inner Mongolia may conduct maintenance in late August, before which it will maintain normal production.

SMM data showed that China's social inventories of aluminium across eight consumption areas fell 51,000 mt on the week to 758,000 mt as of July 29.

Henan is still clearing the Longhai Line within the province, but the shipment efficiency is still low, limiting the arrivals in Gongyi and Wuxi. Meanwhile, the outbound volumes are relatively high in many regions. The arrivals in south China are limited. The impact of logistics on the inventories is worth attention. The stocks of aluminium billet in five major consumption areas fell by 20,600 mt to 99,000 mt from the previous week, a significant decrease of 17.2%.

Stocks declined in all five areas. Inventories in Huzhou fell sharply by 5,000 mt or 41%, and Changzhou saw a large decrease of 4,600 mt or 32.9%, mainly due to the high-speed railways blockage after the floods in Henan. The blockage of Longhai Line seriously impeded the transportation of the cargoes from north-west regions to east China.

According to SMM survey, the impact of the Henan floods has weakened, and the arrivals in east China will basically recover to normal next week. Downstream aluminium extrusion enterprises will maintain the purchase on rigid demand. The inventories of aluminium billet is expected to stand largely unchanged next week. 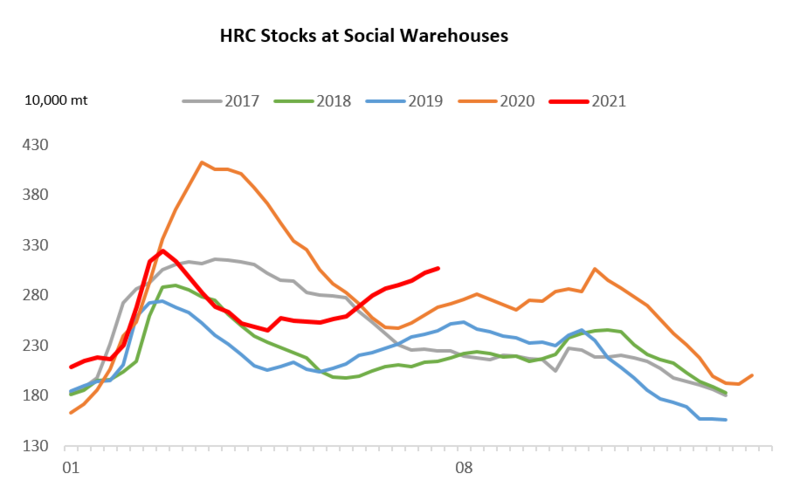 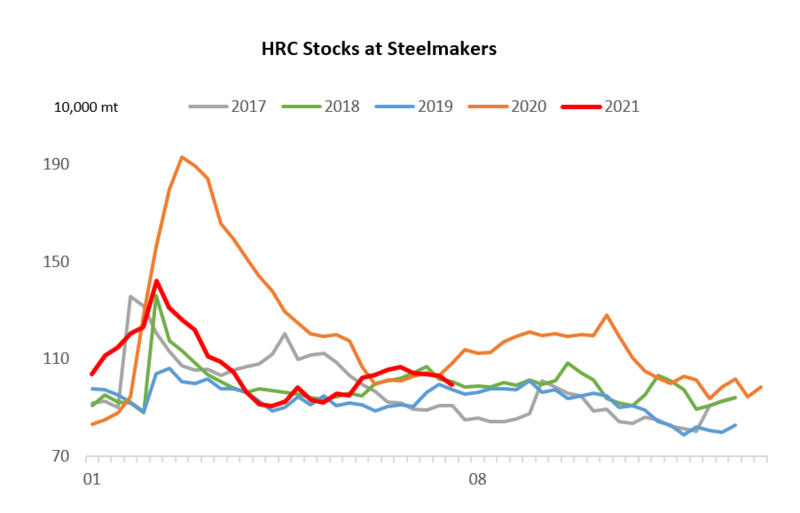 Operating rates of blast furnaces at steel mills stood flat on the week and decreased 1 percentage point from a month ago to 81.2% as of July 29, SMM survey showed. Jingtang port received the most nickel ore arrivals, and combined arrivals at Lanshan and Lanqiao ports were also considerable. Recently, nickel ore deliveries increased from the previous period amid strong downstream demand. Restocking was low, and most reservation period would be due in three months. In current period, orders have come in for September sailing schedule. Before the rainy season in the Philippines, supply of products available in the market could support less than 2 months’ demand. That is, the supply was generally tightened. Nickel ore prices may further trend up against a tight reservation schedule, with mild restocking in the short term. Copper Inventories Down 6,100 mt on Week

Overall de-stocking continued this week, but weakened than before mainly as a result of imported copper. In addition, the wide price spread between Tianjin and Shanghai encouraged delivery from smelters in north China to east China, leading to inventory increase in Jiangsu and decrease in Tianjin. Lastly, participants shall pay close attention to arrivals of imported copper as news came that more will arrive after customs clearance.

The SHEF to LME nickel ratio rallied from low, and once hit 7.55 within the week. Small import opportunities of spot nickel plate in bonded areas emerged, encouraging inflow of spot into domestic market. Deals made by orders still dominated market transactions. Quotation from Russia warehouse receipt remained around 200 USD/mt, Sumitomo reported near 210 USD/mt, and the bonded areas quoted 300 USD/mt of nickel beans.