CST
Source:SMM
On July 21, the State Bureau of Grain and Material Reserves decided to start the bidding of the second batch of national reserves of zinc, putting 50,000 mt of zinc ingots for public tender, a significant increase compared to the first batch of 30,000 mt.

SHANGHAI, Jul 27 (SMM) - On July 21, the State Bureau of Grain and Material Reserves decided to start the bidding of the second batch of national reserves of zinc, putting 50,000 mt of zinc ingots for public tender, a significant increase compared to the first batch of 30,000 mt.

The maximum number of bids for a single bidder is set at 16 or 2,400 mt,  indicating the organization’s determination to help small and medium-sized enterprises. The sales locations are as many as 15 provinces, equally benefiting producers across various regions.

Considering that concentrated end-consumption has weakened this year, consumption in Xinjiang, Yunnan and Inner Mongolia has increased, and there is no need to worry about the reluctance of enterprises in bidding at dispersed and remote locations.

It can be seen from the figure below that the selling location is mainly in north China, which will further increase the pressure on spot sales. Spot premiums in Tianjin are unlikely to rise as Tianjin accounts for the highest proportion of domestic social inventories of zinc ingots. 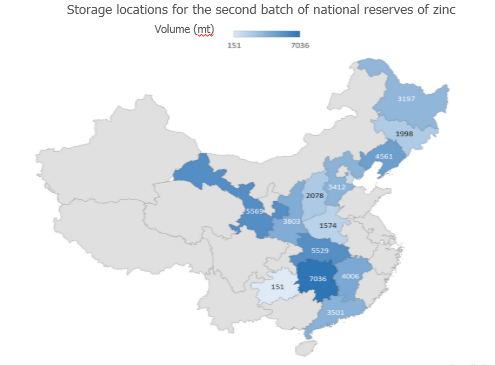 Supply of goods, specifications, and time of storage of zinc ingots stockpiled by the government have exceeded market expectations. The State Reserve Bureau stockpiled zinc ingots from 2009, totalling 259,000 mt. However, the year of restocking can be traced back to 1973. This move has directly exceeded the market's expectations of selling volume by the State Reserve Bureau.

In addition, the specifications of zinc ingots varied, with #1 and #2 zinc ingots accounting for 17.05%. According to SMM survey, some of the zinc oxide companies said that this type of zinc ingot could also be put into production, and they were inclined to produce.

Also, shipping pressure across reserve warehouses is expected to decline due to wider selling locations. The winning bidder is able to pick up the goods at the warehouse on August 2-6 at the earliest, and downstream companies will receive the goods after August 9.

The government reserves made up for the reduction in smelting caused by power restrictions in Yunnan, Guangxi and Henan, helping to balance the market supply and demand. But given that the current zinc ingot social inventories were at low levels, zinc prices are likely to remain high if stocks fail to increase further after the second batch of stockpiles. Zinc prices are likely to fluctuated at high levels as the unexpected information released during the selling of governmental stockpiles and this will suppress the confidence of long-positions building at high levels.