In terms of copper, from a macro point of view, yesterday, domestic officials announced that they would release the second batch of 30,000 tons of national copper reserves in late July. After the news was announced, copper prices rose slightly in night trading because the amount of copper sold was less than market expectations. But with the recent spread of the Delta variant, there are concerns that more travel restrictions will be introduced, weakening economic activity, cautious market sentiment puts upward pressure, and copper futures continue to fluctuate. As the impact of domestic smelter maintenance weakens, superimposed imported copper gradually flows into the market, and the supply side tends to be relaxed. With the arrival of the traditional off-season of copper, the performance of copper consumption in the market is insipid, and the fundamentals are for the price of copper.

[minutes of SMM Morning meeting] the amount of copper sold and stored was less than expected during the pick-up period, and the spot rising water of copper continued its downward trend yesterday.

In terms of aluminum, fundamentals, the current aluminum consumption shows signs of weakening, but the inventory of aluminum ingots is still in the de-stocking cycle. Social inventory of aluminum ingots fell slightly by 3000 tons to 829000 tons on Monday compared with last Thursday, and the narrowing of the decline will put some pressure on aluminum prices. The second batch of spindles was 90,000 tons, still lower than market expectations, and aluminum prices stimulated by market sentiment may rise again instead of falling. Need constant attention.

In terms of lead, the center of gravity of Shanghai lead moved slightly upward overnight, and the bulls entered again, making Shanghai lead recover its 20-day moving average and walk out of Dayangzhu. It is reported that due to the impact of the flood, German lead smelting enterprises stopped production, strengthened overseas destocking expectations, and Lun lead refreshed a three-year high, while the domestic Henan rainstorm event continued to ferment, such as aluminum and other metal production has varying degrees of impact, the lead plate is mainly affected by transport, high lead prices are expected to fluctuate in the short term.

Zinc, overnight Shanghai zinc recorded a small negative column, the upper 5-day moving average turned downward to form a pressure, the lower 20-day moving average to provide support. Yesterday, the state announced the public sale of 50,000 tons of zinc in late July, releasing a policy signal for the country to ensure a stable supply of commodities, and Shanghai zinc fell back. However, low inventory still has support for zinc prices, and focus on inventory accumulation in the short term.

[minutes of SMM Zinc Morning meeting] Guan Xuan paid attention to the inventory accumulation in the later period of 50, 000 tons of zinc storage.

In terms of black series, the thread fell by nearly 1.3%, the hot coil by nearly 2.3%, coking coal by nearly 0.8%, coke by nearly 0.6%, iron ore by nearly 4%, and stainless steel by nearly 0.4%. In terms of threads, the steel market is currently in the expected implementation stage of production limitation. there is no doubt that the output of the supply side will decline under the multiple factors of production restriction and power restriction, and there is less stock in the lower reaches of the current off-season. The unaccelerated release of speculation is not only the upward pressure on prices, but also the bullish support of stock preparation expectations, and the fundamentals of supply and demand may be gradually strengthened by the contraction of supply. Short-term steel prices have upward potential, short-term still need to focus on guarding against the risk of upgrading macro-policy regulation.

In terms of precious metals, Shanghai gold fell nearly 0.8%, while Shanghai silver rose nearly 1.1%. Comex gold futures closed down on Wednesday, but held the $1800 mark. Us bond yields continued to rebound from five-month lows, dampening demand for gold. Analysts point out that the trend of the dollar is the main influencing factor here, and traders believe that next week the Fed is likely to announce hawkish comments about future monetary policy movements. 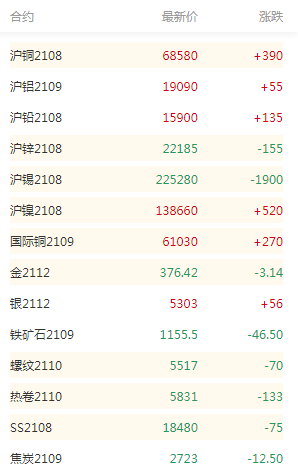 SMM Morning Comments (Jul 27): Shanghai Base Metals Basically Cruised Higher with Dovish Expectations
Shanghai base metals mostly increased on Tuesday morning ahead of the Fed’s monetary policy meeting with the dovish expectations. Meanwhile, their counterparts on the LME all rose.

SMM Morning Comments (Jul 26): Shanghai base metals rose for the most parts amid uneven economic data and spreading pandemic
Shanghai base metals mostly climbed higher on Monday morning as the economic recovery is uneven, and the spreading COVID-19 pandemic loosened the market concerns of money policies. Meanwhile, their counterparts on the LME traded mixed.