CST
Source:SMM
Operating rates of blast furnaces at steel mills rose 0.5 percentage point from a week ago and fell 2.48 percentage points from a month ago to 84.5% as of April 15, SMM survey showed.

On the demand side, in March, the hours of operation of Komatsu excavators increased by 178.4% month on month and 7.7% year on year. In March, automobile production and sales increased by 63.9% and 73.6% year on year, respectively, while the export of home appliances also maintained a 41.4% growth, and the transaction volume of building materials also maintained the peak season level of more than 250,000 mt. The fundamentals still had support in the near term. However, the acceptance of downstream industries declined at high prices, and there was limited room for demand to continue to rise. Recently, there is widespread rumors in the market that the steel export tax rebate will be cancelled. SMM assesses that the short-term impact may be limited when the domestic and foreign price gaps are large. However, if the high price gap cannot be maintained in the later period, the market will face relatively high risks in May. 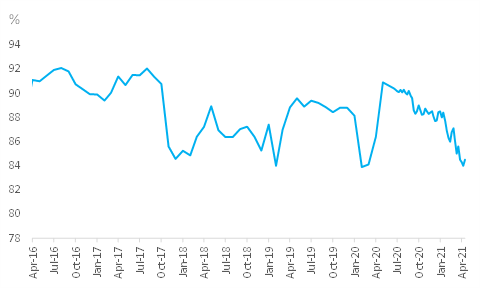