In terms of copper, China imported 512332 tons of unwrought copper and copper products in December, down 8.73 per cent from a month earlier and 3.33 per cent lower than a year earlier. In 2020, the import of unwrought copper and copper products was 6.68 million tons, a substantial increase of 34.13% compared with 4.98 million tons in the same period last year. SMM believes that the month-on-month decline in imports in December is mainly due to the long-term closure of the import window and the low liquidity of the US dollar copper market for a long time, superimposed by overseas shipping delays and tight shipping capacity in December.

In December 2020, China's imports of unwrought copper and copper products declined month-on-month and increased sharply for the whole year.

Today, the spot price of electrolytic copper in Shanghai quoted a price of 90 to 120 yuan per ton for that month's contract, with an average price of 105 yuan per ton, up 5 yuan / ton compared with yesterday. The transaction price of Pingshui copper is 58630-58760 yuan / ton, and that of Shengshui copper is 58640-58770 yuan / ton. Today, the copper in Shanghai jumped low and opened low to a wide concussion around 58630 yuan / ton, then walked out of the V-shaped trend, once fell to an intraday low of 58460 yuan / ton, and then quickly returned to the daily moving average to sort out, with the center of gravity around the daily average.

[SMM data] the weekly inventory of electrolytic aluminum ranges from 20000 tons to 684000 tons.

In terms of lead, Shanghai lead rose 14980 yuan / ton in early trading and then fell back to shock near the daily moving average. The rising price of lead has boosted the purchasing enthusiasm of refineries and the price of waste batteries has risen. The shipping enthusiasm of the recycled lead smelter has increased, the regional price difference of recycled refined lead has narrowed, and the mainstream quotation has discounted the average price of SMM1# lead at a discount of 50-100 yuan / ton. The downstream is afraid of high and careful mining, and the trading activity has decreased.

In terms of black, the thread fell by 0.07%, the iron ore rose by 0.53%, and the hot coil fell by 0.14%. According to SMM, the planned output of sheet coil in January reached a new high this year. Mainly because the overhaul of the blast furnace and rolling line of the steel plant was basically completed in January, and the whole production line of the steel plant was basically restored. Superimposed on the current plate coil profit space is relatively considerable, steel production is active, output increases, domestic demand is seasonally weak, basically oriented to the weak direction of development. At the same time, the hot storage has been fully opened, the inventory pressure has gradually increased, and the willingness of merchants to sell goods to prepare for the accumulation during the Spring Festival has increased. Under such circumstances, it is expected that spot prices will be mainly fluctuating downwards during the year. 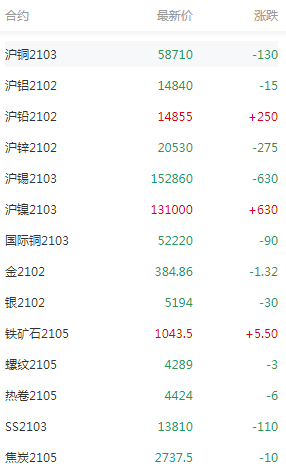