At present, the Australian aluminum industry is mainly composed of five bauxite mines, seven alumina smelters and six original aluminum plants. The export of aluminum products (bauxite, alumina and metal aluminum) is the third largest foreign exchange earner in Australia's mineral exports, after coal and iron ore, and is one of the major contributors to Australia's foreign exchange earnings. Of the downstream aluminum processing products, 87 per cent of alumina production is exported (total output is 20 million tons), and 91 per cent of electrolytic aluminum is exported (total production is 1.6 million tons). Japan is the main destination for Australia's electrolytic aluminum exports, accounting for 29%, followed by South Korea, 27%; Taiwan, 10%; Thailand, 7%; Malaysia, 5%; and Indonesia, 3%.

Since the beginning of this century, the Australian aluminum industry has further developed. By 2018, its alumina production has reached 2.03 billion tons. Australia maintains its position as the second largest alumina producer and global exporter, exporting 17 million tons in 2018. Alumina is Australia's fifth largest non-service export industry, with export revenues exceeding US $10 billion.

The main aluminum resources in the world are Guinea, Australia, Brazil, Jamaica, India and so on. Among them, Australia is the only country that not only maintains high reserves and high production, but also has downstream deep processing capacity. Other countries with smelting capacity, such as China and Japan, are far from Australia in terms of bauxite reserves and production.

Compared with other large countries of aluminum resources in the world and other major alumina and metal aluminum producing countries, the Australian aluminum industry has the following comparative advantages:

1. The advantage of resources is the basis of its industrial development. Compared with other major alumina and metal aluminum producing countries in the world, Australia is one of the countries with the most abundant bauxite resources in the world.

At present, the main aluminum industry companies operating in Australia are: (Rio Tinto Limited) of Rio Tinto, (BHP Billiton Limited) of BHP Billiton and so on. There are five large aluminum mines under production in Australia, namely the Gove (Gove) Mine in the Northern Territory, the Weipa (Weipa) Mine in North Queensland and the Huntley (Huntly), Willoughdale (Willowdale) and Bodington (Boddington) Mine in Western Australia, of which three are owned by Rio Tinto and BHP Billiton, while the remaining two belong to Alcoa's Australian World Alumina. 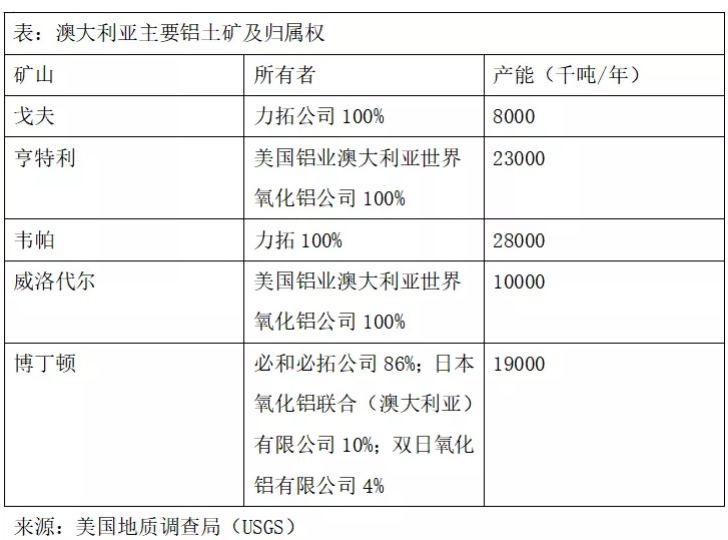 The Rio Tinto Group has a wide range of products, including aluminum, copper, diamonds, gold, industrial minerals (borax, titanium dioxide, industrial salt), iron ore, thermal coal and coking coal, as well as uranium. Among them, Rio Tinto has a position in the industry of bauxite, a fully competitive combination of alumina smelters and original aluminum smelters, make its cost in the position of the average cost in the global industry cost (it is the producer whose share of the global aluminum production cost curve is in the first interval, of which the average cost of the smelter in Canada is in the top 10 of the global aluminum production cost curve). According to the 2017 annual report, Rio Tinto's aluminum business totaled US $11.005 billion, accounting for 26% of Rio Tinto's total revenue. In the first half of 2020, the output of bauxite was 28.4 million tons, and the output of primary aluminum was 1568 kilotons.

For a long time, Rio Tinto has always adhered to exploration investment, even in the trough of the aluminum industry development cycle, and increased investment in the mining upward cycle to ensure that the company can continue to obtain aluminum mineral resources reserves. At the same time, Rio Tinto will also timely sell some exploration projects according to mineral endowments and resource prices in order to obtain better investment. According to the distribution characteristics of global bauxite resources, combined with its own commodity management, Rio Tinto determines the countries and regions that carry out geological exploration activities and locks in the varieties of resources. and make it clear that the basic principle of ore prospecting (including follow-up development) is to focus on super-large, low-cost and profitable mineral resources.

(BHP Billiton Ltd- Broken Hill Proprietary Billiton Ltd), of BHP Billiton of Australia is a famous multinational company mainly engaged in oil and mineral resources in the world. It has developed into the largest resource company in the world. BHP Billiton is active in every link of the primary aluminum industry chain: bauxite mining, alumina refining and aluminum smelting. BHP Billiton is the world's leading supplier of alumina and metal aluminum, with main assets in Australia, Brazil, Mozambique, South Africa and Suriname. BHP's mines are located in the Pilbara region of western Australia, namely Newman, Yandi and Goldworth. The total proven reserves of the three mining areas are about 2.9 billion tons. In southern Ari, there is also an undeveloped C mining area with reserves of 4.5 billion tons.

As a resource enterprise, the source of income and profit of BHP Billiton basically revolves around mineral resources. Attaching importance to resource-based asset allocation and controlling the market is the key measure for enterprises to maintain competitiveness and resist risks. To enhance the value of resources geological exploration is the main way for BHP Billiton to obtain aluminum mineral resources. BHP Billiton has a large geological exploration team, with six professional subsidiaries, namely, Singapore, Johannesburg, Moscow, Perth, Australia, Vancouver, Canada and Rio de Janeiro, to form a geological exploration network throughout Asia, Africa, Europe and the Americas, forming a favorable pattern in which resource exploration can be carried out all over the world at the same time. At present, it is the main supplier of alumina and metal aluminum in the world.

1. Production of bauxite and alumina

At present, there are five bauxite mines in operation in Australia, providing raw materials for seven smelters that produce alumina. The alumina from these refineries is then sent to one of the six original aluminum plants for further processing, which produces the final product aluminum and exports it to various parts of the world. However, the recognized disadvantage of most bauxite deposits in Australia is their high content of silicon dioxide. This increases the cost of refining. To balance this disadvantage, most bauxite deposits are shallow to make mining easier.

2. Trade of bauxite and alumina

Bauxite exporters are mainly in Guinea, Indonesia and Australia, which are rich in bauxite resources. Compared with other countries, Australia's exports are more stable. Indonesia has been a major exporter of bauxite since 2014, while Brazil's exports have been increasing in recent years. In the distribution of bauxite importers, the United States, Canada and other countries are traditional bauxite importers. After decades of development, due to the rapid growth of demand for bauxite, China overtook the United States to become the largest importer of bauxite in 2006. From the perspective of the trade flow of bauxite, the bauxite exported to the United States and some European countries is the bauxite resource of Guinea, while the bauxite imported by China mainly comes from Australia, Indonesia and Malaysia. Compared with bauxite, alumina exporters are widely distributed, with a large number of participating countries. Australia and Brazil are the main exporters. From the perspective of the trade flow of alumina, Australia's alumina is mainly exported to China, Russia and Iceland, while Brazil's alumina is exported to Canada and Europe's Norway. In a word, although the exports and imports of bauxite and alumina are distributed in most countries, in terms of the proportion of imports and exports, exports are concentrated in Australia, Guinea and other places, while imports are concentrated in China, Russia, the United States and other countries. In terms of product structure, Australia exports large amounts of bauxite and alumina at the same time, while big bauxite exporters such as Guinea and Indonesia do not have the capacity to export alumina on a large scale.

For the global aluminum industry, the cost comes from the amount of electricity used in the aluminum production process, which accounts for 25% or 30% of the cost. Australia's approach is to transport bauxite over long distances from mines to processing sites, using agreements with state governments to get cheaper electricity. This makes the cost of Australia's aluminum industry relatively low.

At the same time, Australian miners responsible for mining bauxite are also repairing old ones while developing new ones to maintain the reuse of land resources. This is achieved by maintaining environmental awareness in all its exploration and mining activities and accepting the fact that bauxite mining is a temporary land-use operation. In the long run, it reduces the damage to land caused by bauxite mining and combines industrial development with environmental protection.

Estimated Slight Drop for Australia Shipment during Early November
From Nov.2nd to 16th the will be 83 vessels arriving in China, with 13.097 million tonnes arrival volume, rising 25,000 tonnes compared with 13.072 million tonnes during Oct.26 to Nov.9th.

5 Top Coal Stories for Q1 2015
The first quarter of 2015 didn’t bring much relief for the coal price or coal companies, and now that we’re well into the second quarter of the year, the situation isn’t looking much better.

CST
company news
Morgan Stanley Coal Price Outlook
Morgan Stanley put out its Global Metals Playbook this week, and things weren’t looking so great for many of the metals and commodities mentioned in the report.

CST
industry news
India hikes in iron ore imports
The price of steel making raw material has been down at the a five year lowest point of 65 dollars per tonne by the month December 2013.

Most Read
smm insight
1.CHINA METALS BRIEFING: POST-HOLIDAY UPDATE
feature
2.IMPACT ON 2020-21 WINTER PRODUCTION CUTS
price review forecast
3.SMM Morning Comments (Oct 12): Shanghai base metals rose broadly, the LME complex fell for the most part
data analysis
4.Exclusive: China's base metals output in September
price review forecast
5.SMM Evening Comments (Oct 16): Shanghai nonferrous metals ended mixed
China Metals Market
Privacy policyCompliance CentreSMM Credit ServiceContact UsAbout UsTerms & ConditionsSitemap
Notice: By accessing this site you agree that you will not copy or reproduce any part of its contents (including, but not limited to, single prices, graphs or news content) in any form or for any purpose whatsoever without the prior written consent of the publisher.