SMM9 March 22: most of the non-ferrous market fell in the morning, Shanghai Copper fell 0.52%, Shanghai Aluminum fell 0.31%, Shanghai Zinc fell 1.22%, Shanghai lead rose 0.75%, Shanghai Nickel fell 1.64%, and Shanghai Tin rose 0.36%. Stock markets in Europe and the United States fell overnight, the dollar index rebounded sharply, coupled with negative effects such as epidemic fears in Europe, the market fell today. In terms of zinc, the analysis shows that the current mines and refineries are quite considerable, and the domestic mine processing fees remain upward in September, but the willingness of refineries to store in winter has increased in the fourth quarter, the mine supply may be tight again, and the processing fees may peak. At present, the centralized maintenance of refineries has been completed, and some refineries have accelerated the increase of production. Overall, the increase in supply is expected to put pressure on zinc prices, but there is still support on the demand side, and the long and short factors of the zinc market are intertwined, but the macro news is bad for the market.

In terms of aluminum, the average daily output of primary aluminum worldwide (excluding China) fell to 69800 tons in August, the lowest in nearly three years, according to data released by the International Aluminium Association ((IAI)) on Monday. Global primary aluminium production, excluding China, was 2.165 million tonnes in August, down slightly from the previous month and lower than the same period last year.

Black is today's low shock, fell sharply yesterday and stabilized. In terms of iron ore, there was another storm of tightening production restrictions in Tangshan area over the weekend, and stricter control measures were taken against some iron and steel enterprises since 20:00 on the 18th. It is understood that the management and control is mainly through the night implementation of the blast furnace "slow wind production reduction" way to reduce emissions, supporting to reduce sintering, lime, steelmaking, steel rolling and other processes of pollution emissions, while through the control of transport vehicles to reduce tail gas pollution. The implementation of "one factory, one volume" precision control program, the specific implementation of the actual situation, SMM follow-up will continue to pay attention. Downstream of the current peak season demand has been partially falsified, coupled with the tightening of real estate financing, the later need to observe the table needs and go to the treasury can be strong again.

Crude oil fell 3.55% in the previous period. International oil prices rose in early trading on Tuesday, partly recovering the sharp decline recorded overnight, as tropical storm Beta in the US Bay area has slowed down, but investors are still worried about fuel demand. This is mainly due to the sudden increase in new cases of COVID-19 in some countries and regions. Us crude oil futures rose 26 cents, or 0.66%, to $39.57 a barrel, which expires on Tuesday. The most actively traded November contracts were at $39.75 a barrel, up 0.53% or 20 cents. Brent crude rose 19 cents, or 0.45%, to $42.51 a barrel. 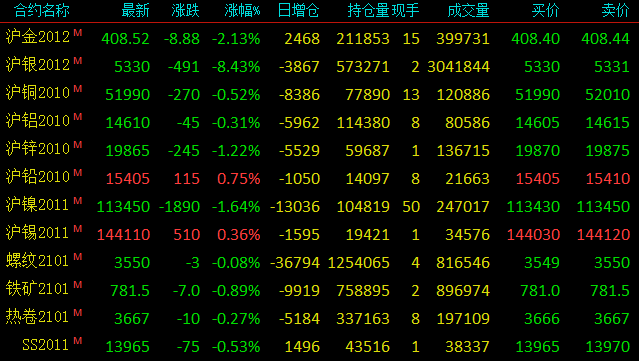