SMM: recently, the new employee of Longhu Group, who has been employed for two months, posted a post in the employee forum and lamented that the company was as warm as home and was "bombarded" by the chairman of the company, Wu Yajun.

Obviously, compared with employee care or some cheap incentives, performance indicators are the first priority of Longhu. However, is it advisable to blindly ignore human feelings? Moreover, under the demand of performance first and eager to expand, the sacrifice may not only be the human feelings of the employees, but also the quality of the house, the reputation of Longhu, and even serious safety accidents.

The cold side of the supremacy of performance

It is understandable for enterprises to attach importance to performance, but blindly results-oriented, the performance is almost cold. At noon on March 13, a major safety accident occurred at the site of the Chunjiang Yancheng project jointly developed by Shoukai shares and Longhu Group, resulting in three deaths and one injury.

According to the notice of citywide site safety inspection issued by the office of Ningbo Municipal work Safety Committee and Ningbo Municipal Housing and Construction Bureau, at about 12:00 on March 13 this year, the Dongsheng ZH08-05-01 plot project on the south side of Wenluo Road and the west side of Donghegang Road, Camel Street in Zhenhai District, occurred during the tower crane demolition operation, resulting in three deaths and one injury. The project is the Chunjiang Yancheng project.

The circular also pointed out that in order to draw profound lessons and resolutely prevent and defuse major safety risks, it was decided to immediately carry out a large-scale inspection of production safety in construction projects throughout the city. And since the 13th, the accident occurred on the south side of Camel Street Wenluo Road, Donghegang Road west side of the Dongsheng ZH08-05-01 plot project, the implementation of suspension and rectification.

After the accident, Longhu behaved calmly as if nothing had happened. Three days later, the official account of Longhu in Ningbo published an article saying, "the whole of Ningbo is moved, and the red disk of the subway will open tomorrow." the first opening of the Longhu Chunjiang City will continue on March 16.

At the 2019 interim results meeting, Wu Yajun said that for Longhu Group, China's urbanization, consumption upgrading and service upgrading are the three opportunities for the next decade.

To this end, Longhu has laid out four major waterways, namely, real estate development business, commercial operation, long-term rental apartments, and intelligent services. Wu Yajun has great expectations for these services, and some media have even revealed that they hope that the business of each waterway in the future can reach more than 100 billion.

It can be said that Longhu's performance is steady, but its growth rate is not as fast as before, and it is far from Wu Yajun's ambition. 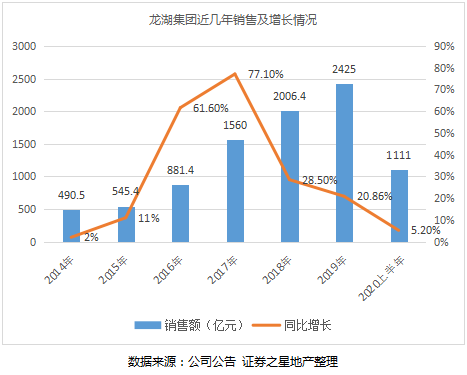 According to the annual report of Longhu in 2019, the sales of Longhu in Zhengzhou is 595 million yuan and the sales area is 66900 square meters, which makes little contribution to the overall performance of Longhu.

Shao Mingxiao once said publicly that when Longhu was founded more than 20 years ago, it was to solve the pain point of human habitation. Always put quality and user experience first. There is a slogan, in Longhu called "be kind to you all your life". As everyone knows, the high-quality housing enterprise, which was once full of feelings and was called the "terrible Dragon Lake" by Wang Shi and Lao Song, has become a textbook-like activist housing enterprise.

In fact, Longhu is the earliest believer in "high turnover". In 2012, it defined its own road of high turnover, and began to take the land crazily, and pursued a higher speed of money return, the speed of starting and paying houses, and the accuracy of investment.

As at December 31, 2014, Longhu had a total land reserve of 34.92 million square meters and an equity area of 32.84 million square meters. Longhu acquired a total of 43 plots of land in 2016, nearly double the amount of land added in 2015. As a result, the scale of Dragon Lake expanded rapidly in a short period of time. In 2017, Dragon Lake sales exceeded 100 billion yuan, jumping directly from 88.1 billion to 156 billion, an increase of 77 percent over the same period last year.

After the rapid expansion of the scale, in order to make a profit, developers are very likely to sacrifice the construction quality of the property in order to cut costs, which is precisely illustrated by the frequent protection of Longhu's rights in the past two years.

The most impressive thing is that on August 26 last year, at the 2019 interim performance meeting of Longhu Group, an owner of Crystal City, a real estate in Longhu Changsha, disguised as a reporter, infiltrated into the venue to vent his dissatisfaction with the related projects in Changsha. "Dragon Lake is synonymous with rights protection in Changsha. All the buildings in Dragon Lake in Changsha are protecting their rights, without exception." In fact, Longhu property owners across the country to protect the rights of the voice one after another, it can be said that there are countless, endless ways. 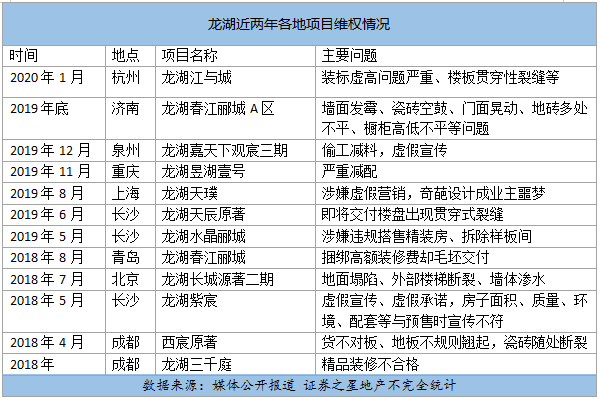 Longhu, which always emphasizes quality and customer experience, is mired in the quagmire of protecting the rights of owners in the context of high turnover. But this is not the current situation faced by a real estate company in Longhu.

"Don't buy a house in the past two years, because the quality of housing in the past two years is the worst, and the tide of rights protection will appear in these few years. Of course, between real estate enterprises, no one should laugh at each other, and then it is estimated that no one can escape," said Gong Zeng, an executive of a real estate company.

In the first half of this year, 53 new projects were added to Longhu, with a total construction area of 11.01 million square meters and an average equity purchase cost of 6425 yuan per square meter. In August alone, Longhu spent 11.12 billion yuan in Ningbo and Hefei in the Yangtze River Delta, Jinan around the Bohai Sea, and Chengdu.

It can be seen that on the road of expansion, Wu Yajun and Longhu have their own rhythm, and this time in the face of Zhengzhou Longhu "happiness speech", it may be its demand for scale and expansion.

After a period of rapid development, Longhu executives are constantly leaving. In October 2018, Han Shi, vice president of Longhu, a former long-leased apartment, announced his resignation. In January 2019, Hu Hao, vice president and head of the pension department of Longhu Group, announced his resignation. Before that, Yuan Chun, the candidate for Longhu's most prestigious reserve CEO, left Longhu in November 2017, Yan Jianguo returned to China Sea, and Zhang Zelin joined Xiexin.

The frequent turnover of senior executives and the tide of rights protection are having an impact on the original positive image of Longhu. Dragon Lake is still Dragon Lake, Dragon Lake is no longer the Dragon Lake at that time.