SMM: according to the official website, the 2020 Huawei developer Conference will be held from September 10 to September 12 in Songshan Lake, Dongguan. It is understood that the meeting contains three key topics: Hongmeng system, HMS Core 5.0and EMUI 11.

Previously, Huawei applied for a large number of trademarks related to "HarmonyOS", including HUAWEI HarmonyOS, HarmonyOS Connected and HarmonyOS Linked. Wanlian Securities analysis pointed out that in the future, in addition to improving related technologies, Hongmeng OS will gradually be used in wearable, smart screens, cars and other smart devices. In the era of the Internet of things, Hongmeng operating system is expected to become the mainstream system, which is conducive to the establishment of a healthy industrial chain ecology in our country.

According to the data of Star Mine, the list of Hongmeng concept stocks is as follows:

Huawei will also announce the latest developments of HMS Core 5.0 at the Huawei developer conference. HMS is similar to GMS, converging core-end-cloud capabilities of Huawei terminals, including a set of open HMSApps and HMSCore, HMSCapabilities, HMSConnect, and corresponding IDE tools for development and testing. In July this year, Huawei officially announced that HMS Core5.0, has covered seven major areas: application services, graphics, media, artificial intelligence, intelligent terminals, Android, series and cloud services, etc., thus opening up Huawei's "core-end-cloud" capabilities in a more comprehensive way. In addition, Huawei will update its progress on EMU11. EMUI is an operating system developed by Huawei based on Android. It is understood that the upcoming Huawei Mate 40 series phones will be equipped with EMUI 11 system.

Minsheng Securities analysis pointed out that based on the changes in Huawei's mobile phone market share and the importance of HMS to Huawei's mobile ecology, the promotion of HMS will be a historical opportunity for domestic software manufacturers.

It mainly includes the following three major advantages: 1, to provide 400 million monthly active users for APP, and the future space continues to rise. 2. Help domestic APP to go to sea. At present, Huawei HMS covers more than 170 countries around the world. with the continuation of the global promotion of HMS, enterprises in the ecology are expected to expand from domestic to overseas, from 1.3 billion users to 3.3 billion users. 3. Enhance the profitability of APP developers in ecology. Apple Store currently earns more than $45 billion a year, while Google Store earns nearly $25 billion a year. HMS is the core carrier of Huawei's mobile phone ecology, and its own Huawei store revenue will be close to that of Apple and Google.

The list of HMS concept stocks is as follows: 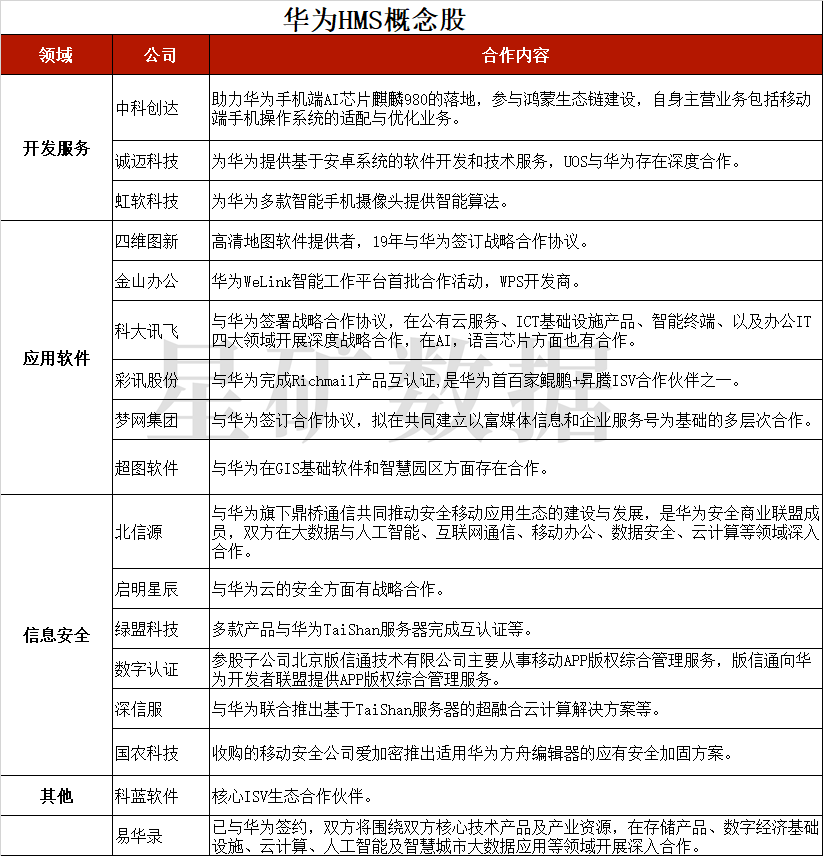 Steel, mining and nonferrous metals industry being in the majority among companies of no dividend for 3 years
408 listed companies in Shanghai and Shenzhen stock market have not passed their dividend from 2014 to 2016, according to data from Security Daily.

CST
industry news
CISA: Iron ore market remains oversupplied, prices to fluctuate near current levels
According to the latest report published by the China Iron and Steel Association (CISA), the iron ore prices are likely to fluctuate around current levels in the upcoming months.