SMM9 March 2: today's non-ferrous metals are red, fat, green and thin. By the end of the day, Shanghai tin rose 0.83%, Shanghai zinc rose 0.74%, Shanghai nickel rose 0.36%, Shanghai lead rose 0.19%, Shanghai aluminum fell 0.45%, Shanghai copper fell 0.72%, aluminum, from the domestic fundamentals, short-term consumption has not yet got rid of the off-season effect, the recent trend is phased correction, taking into account the current stock range is not as expected, the stock is still below 800000 tons. With the recovery of consumption from September to October, it may be possible to go to the treasury again, the lower position of 14200 yuan / ton still has some support, and it is still possible to rise in the medium term. Pay attention to the actual feedback of consumption, the change of inventory growth and the operation of funds in September. On the macro level, we should pay attention to the progress of the epidemic, the economic stimulus measures introduced by various countries and the possible changes in global trading sentiment caused by the trade relations between the major powers of China, the United States and Europe.

In terms of black series, thread rose 0.11%, hot coil rose 0.02%, stainless steel rose 0.03%, coke 1.67%, coking coal 1.88%, iron ore 1.06%. Looking forward to September, we think that the overall market of black system is more optimistic, and steel prices are expected to continue to rise, but the thread range may be relatively small. Because although the strength of the raw material end price continues to "tamp" the bottom support of the spot price, and there is also a slight decline in the supply side of building materials under poor profitability, when the strong demand expectation has not been realized for a long time, the inventory is still high. this will suppress thread prices to be difficult to sustain or rise sharply; while the fundamentals of hot rolling are relatively healthy relative to other varieties, superimposed steel mills are willing to push up prices and have a strong upward momentum. In addition, the impact of production restrictions is still on the news surface, the substantive documents have not been published, and the later impact remains to be seen.

[SMM monthly special] September black series or differentiated operation of steel products to extend the upward trend of iron ore has been suspended.

In terms of precious metals, Shanghai gold fell 0.58 per cent and Shanghai silver fell 1.25 per cent, while international gold prices fell on Wednesday as the dollar rebounded after optimistic US manufacturing data boosted hopes of a rapid recovery in the global economy and overshadowed gold's safe-haven appeal. 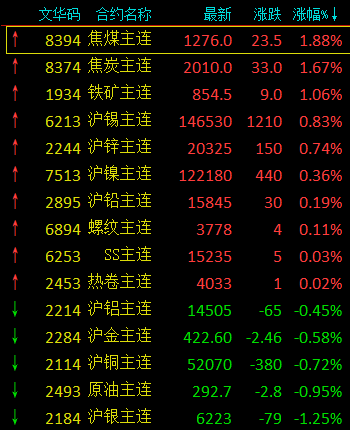 The commodity bull market continued, funds continued to enter the market, and the Mandarin Commodity Index inflowed 1.346 billion yuan, much less than the previous day. Yesterday's popular non-ferrous metals, precious metals two major plates ushered in a low tide of funds, respectively, 18.57 yuan, 1.452 billion yuan, far more than the rest of the plate. And the chemical industry, black two plates become the new darling of funds. According to the observation of specific varieties, the three varieties of copper, gold and silver in Shanghai rank among the top three in the list of capital outflows. The popular ones are iron ore and plastic, but there is no obvious advantage in terms of the absolute value of capital. 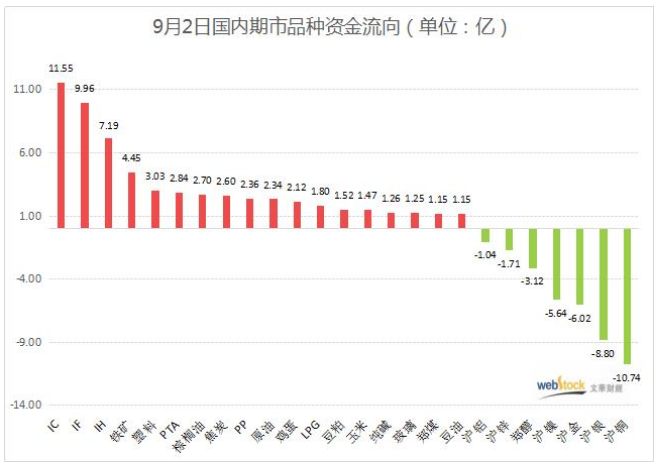 Scan the code and apply to join the SMM Metal Industry Exchange Group.