7.20 minutes of the Bronze Morning meeting 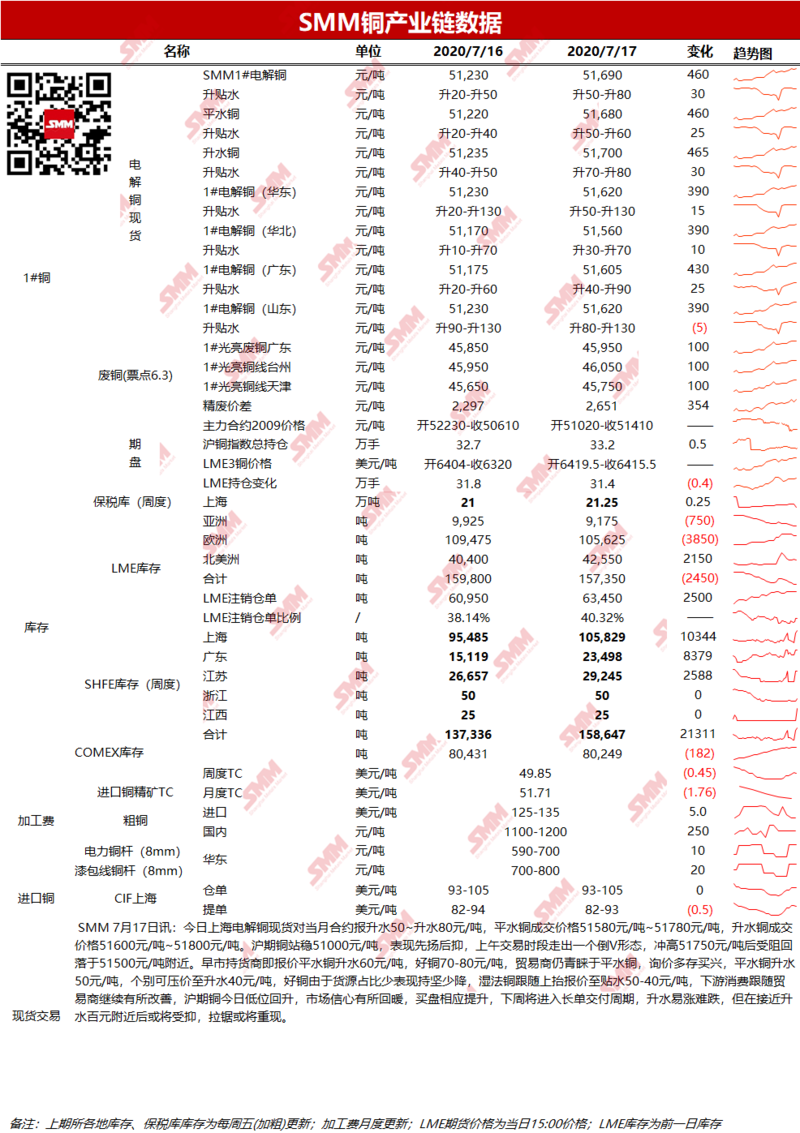 Macro: 1) on Sunday night, the EU's efforts to agree on a 750 billion euro stimulus package appeared to be unraveling. Leaders have failed to resolve differences over the amount allocated by the recovery fund through grants or low-interest loans. [bearish] 2) the International Monetary Fund has urged the United States to implement a new round of fiscal stimulus quickly to accelerate the recovery of the world's largest economy from the impact of the epidemic. [bullish] fundamentals: 1) as of Friday, the SMM copper concentrate index (week) was at $49.85 / tonne, down 45 cents / tonne from the previous week. As Chile's domestic epidemic, mine strikes and other issues continue to affect supply expectations, the seller is more willing to bid. As refineries begin to stock raw materials for fourth-quarter production, and market offers remain low, last week's spot trading range has gradually moved below TC $50 / tonne. 2) the average weekly price of scrap copper was 46470 yuan / ton last week, an increase of 1540 yuan over the week before last week, and the average weekly price difference of refined copper was 2504 yuan / ton, an increase of 379yuan / ton over the week before last week. Copper prices skyrocketed at the beginning of last week, while scrap copper rods rose slowly, deducting about 1400 yuan / ton on the disk, attracting traders and downstream purchasers, manufacturers have a large number of transactions, and actively supplement the corresponding raw material positions in the market, receiving and bidding is higher. 3) imported copper last week (July 13-July 17) the trading range of Yangshan copper premium warehouse receipt was US $105 / ton, while that of bill of lading was US $80mur94 / ton. Last week, the foreign trade market was only temporarily active on Monday, and remained light throughout the week. The enthusiasm of traders in reporting goods is still not high, affected by the epidemic in Chile and the strike, the tight supply of copper is expected to support the seller's offer at a high level in the later period. Due to the approaching shipping date of the bill of lading arriving in Hong Kong at the end of July, a small number of consignors are more willing to ship, and their quotations are slightly reduced. However, the high stack premium rose to a relatively high level, resulting in the buyer's acceptance mood was suppressed, more to maintain a cautious wait-and-see state, demand is difficult to improve. 4) inventory last week, LME copper stocks decreased by 2450 tons to 157350 tons compared with the previous week, while copper inventories in the previous period increased by 21311 tons to 158647 tons compared with the previous week. 5) spot East China: on July 17, the spot price of electrolytic copper in Shanghai was quoted as 50-80 yuan / ton for that month's contract. After the market price is stable, the willingness to purchase downstream increases, and Shengshui is expected to continue to rise today. It is expected that the spot water will rise to 50 RMB80 / ton today. South China: on July 17, the spot price of electrolytic copper in Guangdong province rose by 40 per cent to the monthly contract, with an average price of 25 per cent; wet copper offered a discount of 10 per cent, with an average price increase of 10 per cent. Inventory decreased slightly, the holder raised the price for shipment, in early trading, the consignor reported that the water rose by 60 yuan / ton, but the number of consignors was limited, and some of the consignors took the initiative to reduce the price for shipment. Overall, trading in the market weakened over the weekend, and the trend of rising water in the day was repeated. Copper price and forecast: last Friday night, Lun copper closed at 6437 US dollars / ton, up 0.42%. The trading volume was 11000 lots, and the long positions increased by 4759 to 319000 lots. The Shanghai Copper 2009 contract closed at 51440 yuan / ton, up 0.06, and the trading volume was 42000 lots, while the short positions were reduced by 817 lots to 112000 lots. Copper prices remain volatile at night, with many empty forces intertwined, and the inner and outer plates are close to the five-day moving average to get the cross star. On the macro front, the new crown epidemic in the United States has intensified again, adding to the uncertainty about the economic recovery, as well as the escalating international tensions. CMX gold steadily rose above $1810 on Friday, reflecting a rebound in risk aversion. On the other hand, the disturbance on the supply side of copper continued to provide support for copper prices below, so copper prices were subject to shock consolidation on Friday. The situation is expected to continue, waiting for macro sentiment to improve. It is estimated that today Lun Copper 6400 won 6450 U.S. dollars / ton, Shanghai Copper 51300 won 51700 yuan / ton.