SMM7 March 16: Thursday morning, the non-ferrous market fell collectively, including Shanghai copper, Shanghai aluminum, Shanghai lead, Shanghai nickel fell more than 2%, Shanghai zinc and tin fell more than 1%. At the macro level, data released by the Bureau of Statistics in the morning showed that according to preliminary calculation, the GDP in the first half of the year was 45.6614 trillion yuan, which was 1.6% lower than the same period last year at comparable prices. On a quarterly basis, it fell 6.8% in the first quarter from the same period last year, and increased by 3.2% in the second quarter. The higher-than-expected rise in GDP in the second quarter shows that China's economy has rebounded rapidly, and President Xi also said that the fundamentals of China's long-term improvement in the economy have not changed and will not change. But on the other hand, expectations of stimulus policies may fail, which will be bad for the market to a certain extent. In terms of aluminum, on July 16, the trend of slowly de-stocking continued. According to SMM statistics, the weekly inventory of electrolytic aluminum in China dropped slightly by 4000 tons to 708000 tons. "check the details.

Black fell slightly across the board in the morning, rising a few days ago, coupled with a general decline in the commodity market today, and ferrous metals fell under pressure. Looking at the trading situation of building materials across the country, the northern market is not affected by the rainy season, and the demand continues to maintain a high degree of prosperity. On the other hand, the interference in the rainy season in southern China, such as Guangdong, has obviously decreased after late June, and the market transaction situation has also improved obviously. at the same time, considering that the current high thread output has a high probability of falling slightly, it is expected that the price of the building materials market will remain volatile and strong from July to August. 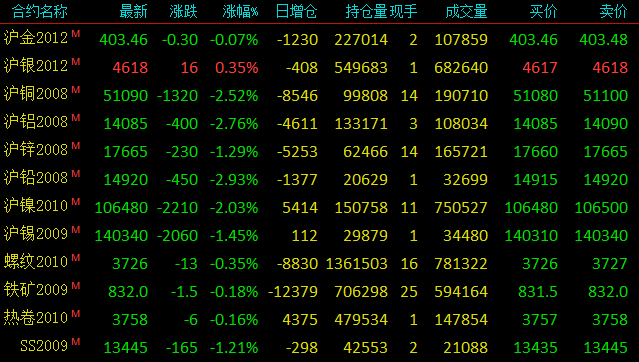 Copper: today, the spot price of electrolytic copper in Shanghai is quoted at 20 to 50 yuan per ton in the current month, the transaction price of copper in flat water is 51080 yuan / ton to 51360 yuan / ton, and the transaction price of copper in Shanghai is 51090 yuan / ton to 51380 yuan / ton. Today, copper in Shanghai continued its overnight decline, falling more than 1,000 yuan, with a surface area of nearly 51000 yuan / ton. On the first day after the change of the spot market, the holder quoted a price of 30 yuan / ton for Pingshui copper in the morning market, and 40 yuan / ton for good copper. Traders led the morning market to buy actively. Pingshui copper could lower its price to 20 yuan / t, and the delivery volume increased significantly. Some downstream also entered the market to replenish stock after a continuous sharp fall, so the holder quickly raised the price of Pingshui copper to 40 yuan / ton in the second trading session, but the deal was deadlocked. Trading market conditions are not as good as before, good copper is difficult to synchronize with the rise, the degree of market favor is obviously inferior to flat copper; Wet-process copper narrowed slightly to 60 yuan / ton at a discount of 70m / t, and downstream replenishment was significantly better than at the beginning of the week. Today, copper futures in Shanghai fell below the 5-day moving average and pointed to the 10-day moving average, giving up its gains after surging 5% on Monday. Traders showed renewed activity and low rising water attracted them to enter the market. If the market decline slows down, the lower reaches of the market will gradually pick up and rise, and the rising water will show a steady and firm trend before the outflow of delivery sources.

Tin: spot market. Today's quotation is 139500 RMB142000 per ton. Shanghai tin noodles this morning are down about 1500 yuan / ton compared with yesterday morning, and the average net price is down 750yuan / ton. Spot prices decline, but downstream buying is difficult to flourish, rising stickers are not ideal, traders hold a wait-and-see attitude, manufacturers' shipments are still general, and the overall trading atmosphere in the Shanghai-tin spot market is generally weak. In terms of liter discount, the price of Yunxi in Shanghai tin 2009 contract suite is 1000mur1500 yuan / ton, Yunzi 500 yuan / ton, and the small-brand discount is about 1500 yuan / ton.