7.16 minutes of the Bronze Morning meeting 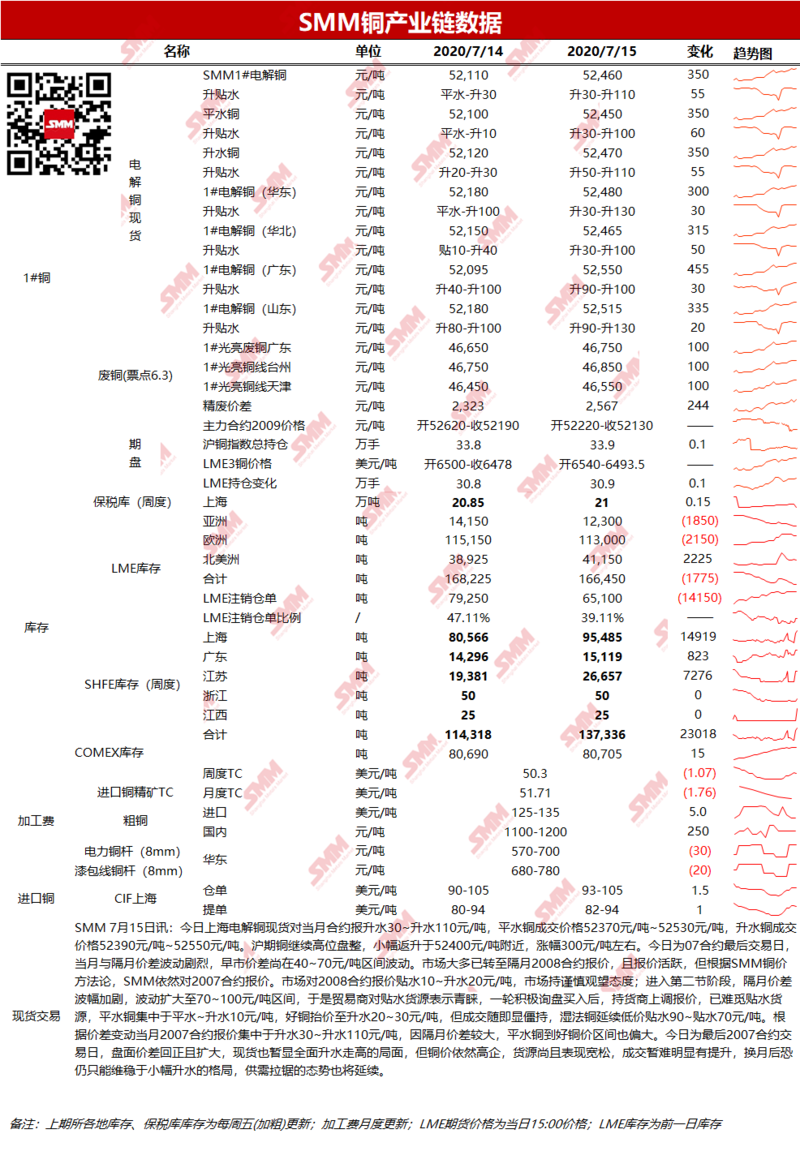 Macro aspect: 1) OPEC+ will reduce the scale of production reduction as planned in August, from the current production reduction of 9.6 million barrels to 7.7 million barrels. Russia's energy minister said Russia could increase production by 400000 barrels a day in August. [bearish] 2) the Federal Reserve's beige book survey showed that the economy showed moderate signs of recovery in early July, with economic activity in almost all jurisdictions increasing, but still far below the level before the epidemic. [neutral] 3) China will release heavy economic data today. GDP in the second quarter is expected to grow 2.4% compared with the same period last year, reversing the historic contraction in the first quarter. Industrial value added is expected to grow by 4.8% in June, and retail sales are expected to grow for the first time since the outbreak. Investment in fixed assets fell 3.3% in the first half of the year, which was significantly narrowed. Fundamentals: 1) Copper concentrate Nevada Copper aims to restart Pumpkin Hollow, in the current quarter. The increase in production at the mine earlier this year was limited by government restrictions to control covid-19 outbreaks. The company insisted that it would still restart the plant in underground mines in August, but would have to modify it in the light of the impact of the covid-19 pandemic and other factors. The goal is to reach full capacity production in the fourth quarter. 2) the price of scrap copper in Guangdong is 46600 yuan / ton ~ 46900 yuan / ton, which is 100 yuan / ton higher than that of the previous trading day. The price difference of refined copper is 2567 yuan / ton, and the month-on-month expansion is 244 yuan. The good order of waste copper rod drives the demand of waste copper by waste enterprises, and the supply and demand is still tight. Due to the grim situation of downstream exports and the depression of the brass bar industry, the average operating rate of brass bar enterprises in June was 64.07%, down 0.64% from the previous month, and 8.34% lower than the same period last year. The operating rate of brass bars is expected to be 63.78% in July, demand continues to weaken slightly, superimposed with a large number of copper ingots to replace, the overall raw materials of brass processing enterprises have been relatively loose. 3) on July 15, the warehouse receipt for imported copper quoted US $93mur105 / ton, the average price increased by US $1.50 / ton compared with the previous day, and the bill of lading quoted US $82mur94 / ton, with an increase of US $1 / ton compared with the previous day. The LME0-3 discount is US $3 / ton, and the import loss is around 50 yuan / ton. Trading in the imported copper market remained light yesterday. The enthusiasm of traders in reporting goods is still not high, affected by the epidemic in Chile and the strike, the tight supply of copper is expected to support the seller's offer at a high level in the later period. Even if the price ratio improves, but the recent high copper prices still limit the willingness of buyers to accept goods, buyers and sellers show a stalemate seesaw situation. The price of fire warehouse receipt is more stable, while the wet warehouse receipt shows that the quantity is small and the price is high, and the quotation has gone up. 4) LME copper inventory decreased by 1775 tons to 166450 tons month-on-month on July 15, while copper warehouse receipt inventory increased by 12450 tons to 65024 tons in the previous period. 5) spot East China: on July 15, the spot price of electrolytic copper in Shanghai was quoted as rising water 30 to 110 yuan / ton for that month's contract, up 55 yuan / ton compared with the previous trading day. On the spot side, the willingness to receive goods downstream improved after the copper price fell, and the spot rising water is expected to rise slightly today. It is expected that the spot water will rise to 30,000,000 yuan / ton today. South China: on July 15, the spot price of electrolytic copper in Guangdong province rose by 40 per cent to the monthly contract, with the average price falling by 25 yuan per ton. Spot market: Guangdong inventory skyrocketed for two consecutive days. Affected by this, the holder continued to adjust the price for shipment. by 11:00, flat copper had dropped to 20,30 yuan / ton, and there was even a discount on wet-process copper, while good copper remained at 100 yuan / ton due to delivery reasons. In terms of market trading, due to a certain correction in copper prices yesterday, and rising water fell, some downstream began to replenish, but the purchase volume is still limited; and traders affected by the approaching delivery, trading is not active. Overall, the trading atmosphere in the market yesterday was better than yesterday, but it did not return to normal level. Finally, it is reported that copper imports are still arriving in Hong Kong this week, and stocks are still rising. Copper price and forecast: last night, Lun Copper closed at US $6394.5 / ton, down 1.62%. Trading volume was 21000 lots, and short positions increased by 1999 to 311000 lots. Shanghai Copper 2009 contract closed at 51220 yuan / ton, down 1.75%, with a turnover of 88000 lots, and short positions increased by 295 to 111000 lots. Yesterday's copper price correction was mainly affected by the weakening pressure of A shares, superimposed on the recent decline in the number of newly diagnosed people in Chile, supply concerns have been alleviated, and copper prices have been revised back in the context of a large increase in the previous period. However, at the macro level, progress in vaccine development led to a rebound in US stocks, with the US dollar index refreshing its five-week low below 96, indicating an improvement in market risk sentiment, and copper prices are expected to be supported today. It is estimated that today Lun Copper 6380Rue 6440 US dollars / ton, Shanghai Copper 51100PUE 51500 yuan / ton.