CST
translation
Source:SMM
SMM7 March 15: the main reason for this rise is: 1. The whole world is under water, and the macro-positive situation has promoted a general rally in stock markets and commodities. Copper, aluminum and lead in non-ferrous metals have all filled the gap after the whole year, and only zinc and nickel have not returned to their previous price levels. Market funds have made up the logic to push zinc prices up strongly. 2. The market remains optimistic about infrastructure consumption during the year, believing that higher-than-expected consumption will occur in the peak season. Looking forward to the second half of the year, this article discusses the short-term macro changes and future consumption expectations.

The recent strong rise in zinc prices accelerated after breaking through the previous shock platform on July 8, rising as high as 18455 yuan / ton in intraday trading, an increase of 1710 yuan / ton. by the end of July 15, zinc price had fallen to 17855 yuan / ton. The main reason for this rise is: 1. The whole world is under water, and the macro-positive situation has promoted a general rally in stock markets and commodities. Copper, aluminum and lead in non-ferrous metals have all filled the gap after the whole year, and only zinc and nickel have not returned to their previous price levels. Market funds have made up the logic to push zinc prices up strongly. 2. The market remains optimistic about infrastructure consumption during the year, believing that higher-than-expected consumption will occur in the peak season.

Looking forward to the second half of the year, this article discusses short-term macro changes and future consumption expectations:

On the macro level, in the context of global water release to boost the economy, a large number of currencies flow into global stock markets and commodities, driving them to a strong rise, but there may be some changes in the coming July-August. 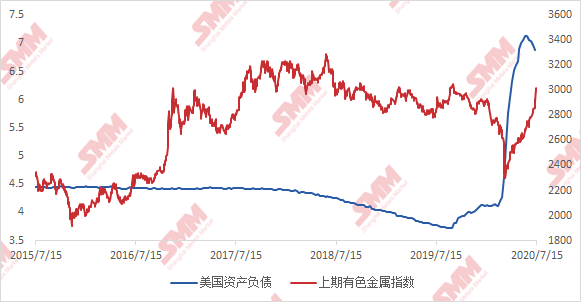 From a monetary point of view: data released by the Federal Reserve on July 9 showed that the total size of the Fed's balance sheet fell by $88 billion to $6.97 trillion as of July 8, the biggest weekly decline in nearly 11 years. of this total, the balance of outstanding repurchase agreements fell to zero from $61.2 billion a week ago. The move also indicates that monetary connectivity in the US market will slow or even tighten in the future. After the epidemic in China has been completely brought under control, all industries have achieved a better recovery, and with the final issuance of special treasury bonds on July 30, if the domestic trend of recovery is maintained and there is no reason to continue to release water, it will be the time for monetary policy to be launched quietly, when liquidity in the market will tend to be tight.

On the consumption side, in terms of infrastructure and real estate, the future peak season is expected to be better, broken down as follows: 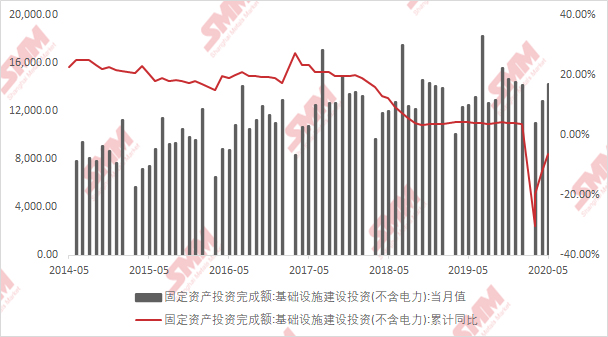 In terms of infrastructure, according to SMM research, after the epidemic, most of the orders of enterprises in various places were the rush orders of last year's projects. after the end of the rush orders, there was an order vacuum in some areas because the new projects had not yet started this year. Similarly, with the advent of the rainy season, the superimposed flood situation in the southern region became more and more serious, which led to the opening and stopping of some projects, affecting downstream demand. Despite the impact of the rainy season, the weakening of consumption from June to July is also closely related to the shortage of funds for infrastructure projects. In May, due to the mid-June year, the special debt was not completely devolved to the terminal, resulting in a shortage of capital construction funds during the period. In July, a few days ago, the Ministry of Finance has issued a new batch of 1.26 trillion yuan of new local special debt lines to provincial financial departments, and the shortage of capital construction funds will be alleviated. In terms of real estate, on June 35, the growth rate of urban land production and sales turned from negative to 4.4%, while the year-on-year and month-on-month growth rates of house prices in 100 cities rose slightly to 3.2% and 0.5% respectively. Under the background of both rising real estate sales, helping enterprises to return funds, thus driving real estate enterprises to acquire land and start new projects, the real estate sector is expected to have a rush demand after the end of the rainy season. 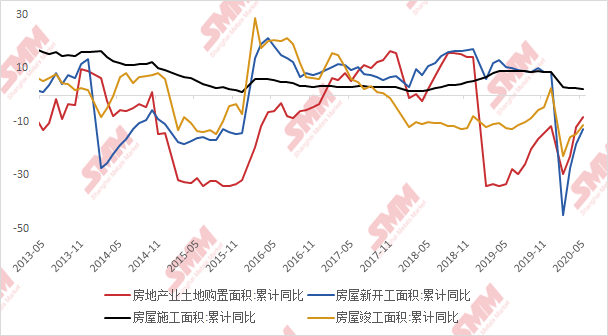 To sum up, in the short term, the direction of zinc price will still be guided by the macro, combined with the current direction of Sino-US monetary policy and the recent frequent disputes between China and the United States, which may lead to a short-term macro correction. In the medium to long term, against the backdrop of ample global liquidity and supported by consumption expectations during the peak season, zinc prices still have the power to rise again. However, at the end of the year, or return to the logic of long-term mine surplus, leading to a fall in prices.