Lithium resources and development status of salt lakes in China

The lithium salt lake resources in China are mainly distributed in Qinghai and Tibet. Among them, there are 10 lithium ore producing areas with mineral reserves in Qinghai salt lake resources, with lithium chloride reserves of 24.4738 million tons. There are two super-large deposits in Chaerhan Salt Lake and Bieltan mining area, and three super-large deposits in Xitai, East Taijinel Lake and Yiliping mining area. The lithium content of 10 salt lakes reaches 8.92 million t of industrial grade lithium resources, which can be developed and utilized. 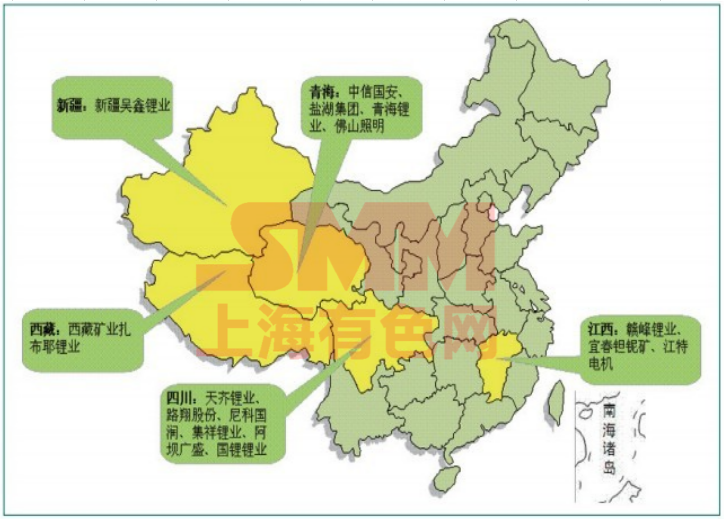 The salt lake resources in Tibet are mainly distributed in northwest Tibet, among which there are 80 salt lakes whose lithium content in brine reaches the boundary industrial grade, of which 8 are large and above, and the reserves of LiCl resources are 17.3834 million tons. The main deposits are salt lakes such as Zabuye, Longmu Cuo, Jiezecha Ka, La Guocuo, Eyatso and so on. 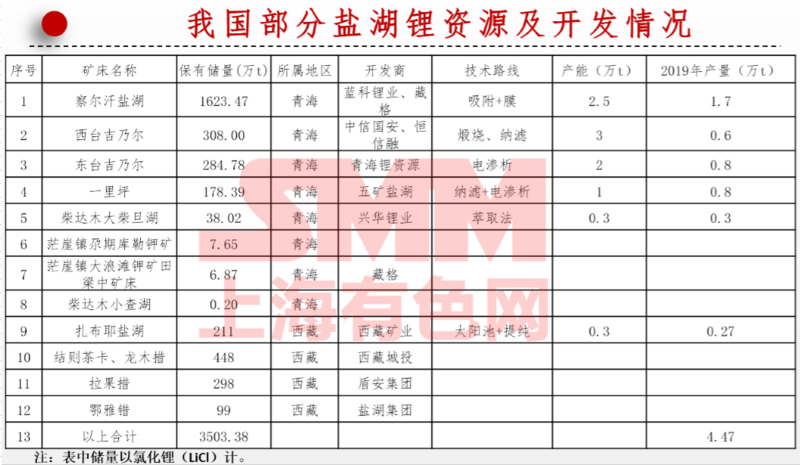 Before the 1960s, the research on the technology of extracting lithium from brine had started, and the United States had done a lot of work in this area, but most of them only stayed in the stage of research and development and could not be put into practical application. Since 1974, with the discovery of a large number of salt lake brine lithium resources, it has promoted the development and investment enthusiasm of some major brine lithium resources and lithium mining enterprises in the world. After 1980, American Cyprus Fute Company, FMC and other companies began to enter the field of lithium extraction from salt lake on a large scale, which opened the prelude to the industrialization of lithium extraction from salt lake.

The precipitation method is only suitable for salt lake brines with Mg2+/Li+ less than 10, so this technique has been applied in salt lakes with low Mg2+/Li+, such as Atacama, Yinfeng and Umbrierto in South America. This technology can realize the separation of magnesium and lithium in the salt field process, and concentrate the Li+ to more than 30g/l, and the latter process only needs deep impurity removal to meet the production demand, and has the advantages of simple process technology, low energy consumption, low investment and so on.

Because of the above advantages, as early as 1986, Fute Company in Cyprus of the United States stopped its industrial production of lithium extraction from spodumene and used this process to invest in the construction of lithium carbonate processing plants in Yinfeng, Nevada and Atacama Salt Lake in South America, opening the prelude to extracting lithium from brine. In 1997, SQM successfully extracted lithium from the salt lake of Atacama (valence Atakama) in Chile, reducing the price of lithium carbonate to 1500 million (while the international price was 3300 million in the same period), which had a great impact on the hard rock lithium industry all over the world. In 2018, four salt lake lithium extraction companies, Yabao, SQM, Livent and Orocobre, used this technology to produce a total of 158000 tons of lithium chemical products, accounting for 52.4% of the world's total lithium supply, with a production cost of about 3000 million tons, which has certain advantages in the industry. As the technology is simple and mature, the cost composition has not changed basically in the past 40 years, and the price change is mainly due to rising prices and higher labor costs.

In March 2003, Zabuye Salt Lake used this technology to start the construction of the first phase of lithium carbonate project, which was successfully tested in August 2005. However, due to the large loss in the brine drying process caused by the carbonate radical in the salt lake, coupled with the problems of cold and hypoxia above 4000 meters above sea level and poor basic conditions, the increase of production capacity is limited. At present, the design capacity is still 3000t Unia, and the total production of lithium salt in 2017 is 2728t. As the technology has not changed in the past ten years, the cost composition has not changed significantly, and the current production cost is about 15,000-20,000 yuan.

At present, an industrial plant has been built in Dachaidan Salt Lake by using this technology, and lithium chloride and lithium carbonate have been successfully produced. However, due to the discontinuous production caused by high extractant price, high loss and equipment corrosion in the initial stage, the cost has been as high as 60,000 yuan. In recent years, with the continuous progress of this technology, the current production cost is about 40,000 yuan.

The calcination method is a technology proposed for salt lake brine with high mg-Li ratio. Due to the high magnesium lithium salt lake brine beach concentrated to the last brine (old brine) is lithium-rich brucite saturated solution. Brucite is decomposed into magnesium oxide and hydrogen chloride above 550 ℃, and lithium chloride does not decompose under these conditions. When the calcined sinter is leached, lithium salt soluble in water enters the solution, magnesium oxide is almost insoluble in water and remains in slag, and impurities such as sulfate, magnesium and a small amount of boron in the leaching solution can be obtained by evaporation, alkali precipitation and drying after filtrate purification.

The calcination process production line was built in Xitai Jinel Salt Lake from 2007 to 2011. at the beginning of the project, due to the problems of equipment material selection, hydrogen chloride recovery and magnesium slag recovery, the production was not continuous and the cost was more than 80,000 yuan. With the hot lithium salt market in 2015, the company launched a number of scientific and technological research and development and technical transformation work. After the completion of the transformation in 2016, the problems affecting the operation of the process have been improved, and the production cost has been reduced to about 40,000 yuan (equivalent to the cost of most ore lithium extraction enterprises), especially the product quality has been greatly improved. at present, the products have been applied to some large and influential battery material production enterprises, such as Beijing Dangsheng Technology.

In 2007, the 3000tmo process production plant was successfully built in Dongtai Jinel Salt Lake. At the beginning of the project, due to the unstable operation of the device and high membrane consumption, the cost exceeded 60,000 yuan. Later, with the mastery of electrodialysis membrane system and the upgrading of electrodialysis membrane manufacturing technology, the problem of unstable operation of the device has been gradually solved, and the production cost has been greatly reduced to about 20,000 yuan, which has a great cost advantage over the technology of extracting lithium by ore method. In 2012, another 7000t production line was built and successfully produced. After several years of upgrading and transformation, the two production lines have a total capacity of 10,000 tons. At present, the two production lines can produce more than 99.6% of the main content at one time. The product quality is fully up to the "local standard of brine battery-grade lithium carbonate", and 90% of the products are sold to battery material manufacturers. Representative downstream customers are Peking University, Tianjin Bamo, Shanshan, and Beijing Dangsheng.

At present, the 10,000 t production line newly built by Qinghai Dongtai Jinel Lithium Resources Co., Ltd. has been completed and put into production. Up to now, the production capacity of the industrial plant built by this technology has reached 20,000 t / a.

1. Technology of extracting Lithium by adsorption of Lithium Ion sieve

Ion sieve is a new type of synthetic material which can introduce target ions into inorganic compounds and react to form complex oxides. The material can form spatially matched holes with the target ions without damaging the structure, and can selectively identify and screen the target ions in the environment where multiple ions coexist.

2. Technology of extracting Lithium from Salt Lake by Electrochemical de-intercalation

In 2017, the technology achievement was transferred to Shanghai Danhua Science and Technology Development Co., Ltd. (transfer funds of 104.8 million yuan), and Jiangsu Zhongnan Lithium Industry Co., Ltd. was jointly established by Shanghai Danhua and Central South University to continuously develop and promote the technology. It is reported that the industrial test of the achievement transformation technology has been completed, and the key equipment and intelligent expert control system of the second generation electrochemical de-intercalation membrane stack electrolyzer have been developed, and the technical cooperation agreement of the project with an annual output of 20,000 tons of lithium carbonate has been signed with relevant enterprises.

In the past decade, although the technology of extracting lithium from salt lakes with high mg-Li ratio has made great achievements, compared with the low mg-Li ratio salt lakes in South America, there is still a lot of room for improvement in production cost. In the future, with the lithium resources development process accelerating capacity release and other factors, if the market price continues to decline, many enterprises with high costs and lack of resources will be difficult to support, or even lose money and stop production.

In order to achieve sustainable development in the fierce market competition, increasing investment in science and technology, improving and optimizing processes, improving product quality and reducing production costs are the problems that need to be considered for every lithium extraction enterprise with high mg-Li ratio in salt lake.

At present, the technology of extracting lithium from salt lake brine is difficult to meet the requirements of boron and chloride in YS/T-582-2013, and it needs secondary purification to achieve it, which leads to high production cost. In order to effectively solve the common problems of boron and chloride index of salt lake lithium extraction technology in lithium industry, it is suggested that the government, industry associations and upstream and downstream enterprises should explore the influence of boron and chloride on battery-grade lithium carbonate by necessary means. timely and appropriate revision of the current product industry standards. Formulate more scientific product quality standards to promote the promotion and application of salt lake lithium products in the battery field.

In recent years, with the development of adsorption and extraction technology, many scientific research institutions and enterprises have developed lithium-sodium separation resin suitable for extracting lithium from original halogen, and have made some achievements in the field of extracting lithium from original halogen. At present, a number of enterprises are non-stop to tackle related scientific and technological problems.

4. Attach importance to scientific and technological research and development and learn from each other

Scan the code and apply to join the SMM metal exchange group.