7.14 minutes of the Bronze Morning meeting 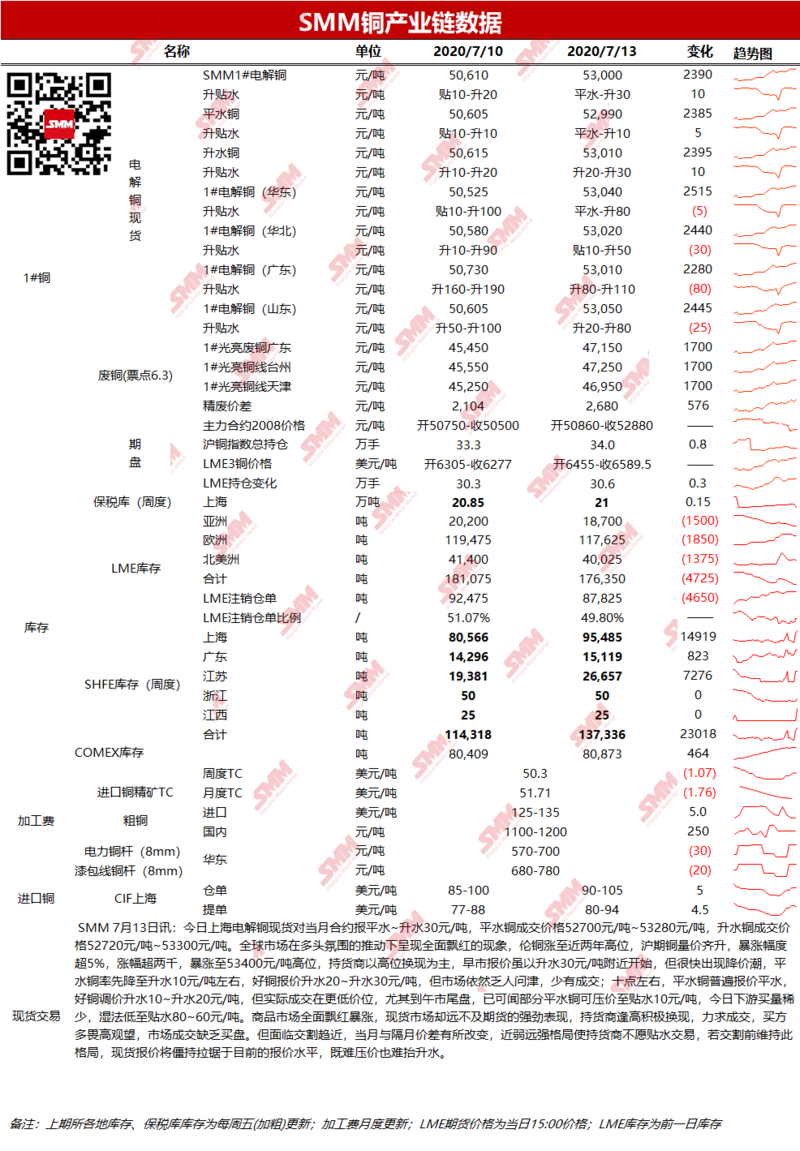 Macro: 1) the budget deficit of the United States in June reached a record high of 864 billion US dollars. Federal spending more than tripled year-on-year in response to the economic impact of the new crown epidemic. [bearish] 2) according to market news, the Centinela copper mining union, owned by Chile's Antofagasta, voted to go on strike in Chile. Copper futures rose 3 per cent to $6620 a tonne, the highest level since July 2018, according to data released by (LME), the London metal exchange. According to sources, Saudi Arabia and OPEC have discussed the possibility of low-key handling of the August oil production cut to 7.7 million barrels per day, but no consensus has yet been reached. [neutral] fundamentals: 1) the price of scrap copper in Guangdong was quoted at 47000 yuan / ton ~ 47300 yuan / ton on July 13, an increase of 1700 yuan over the previous trading day, with a price difference of 2680 yuan / ton and a month-on-month expansion of 576 yuan. Copper prices have jumped sharply, while scrap prices have risen relatively slowly, and many scrap copper merchants still have strong confidence in the future of copper prices, and they actively choose to cover the market and cherish sales, and the willingness to ship goods is not high, and the merchants who have agreed to ship goods in the early stage have stopped shipping. As a result, the procurement volume of downstream manufacturers was reduced yesterday. 2) the warehouse receipt for imported copper on July 13 quoted US $105 / ton, an average price of US $5 / ton higher than last Friday, and the bill of lading quoted US $80mur94 / ton, with an average price of US $4.50 / tonne higher than last Friday. LME0-3 has a premium of US $6.55 / ton and an import loss of around 100RMB / ton. Market activity warmed up on Monday, mainly because the improvement in import prices last Friday night led to an increase in demand, but the turnover remained light. Traders' expectations for the opening of price comparisons in August after the change of months are heating up again, raising their quotations one after another. Although the buyer's inquiry is positive, the high superimposed premium quickly suppresses the buyer's mood of receiving goods, so he maintains a cautious wait-and-see state. Warehouse receipt prices have also been raised at the same time. At present, the price of good copper warehouse receipt is quoted around 110 US dollars / ton, and the transaction has not been heard. 3) LME copper inventory decreased by 4725 tons to 176350 tons month-on-month on July 13, while copper warehouse receipt inventory increased by 6559 tons to 47426 tons in the previous period. 4) spot East China: July 13 Shanghai electrolytic copper spot to the current month contract quoted flat water ~ litre water 30 yuan / ton. Spot, as delivery approaches, traders are not willing to discount shipments under the pattern of near-strong and far-weak, and Shengshui is expected to be deadlocked in the current position. It is expected that today's spot flat water-litre water 30 yuan / ton. South China: on July 13, the spot price of electrolytic copper in Guangdong province was quoted as an increase of 80 RMB110 for the current month's contract, with an average price drop of 80 yuan / ton. Spot market: the arrival of imported copper and domestic copper increased significantly over the weekend, inventories increased significantly by more than 4,000 tons, and the overall inventory re-stood at 20,000 tons. Under the background of the sharp increase in inventories and the sharp rise in copper futures prices, the holders continue to reduce the level of water shipments. However, even so, the downstream demand for receiving goods is still very low, only to maintain the need to purchase. Overall, high copper prices held back trading, and trading in the market was dismal yesterday. Copper price and forecast: last night, Lun Copper closed at US $6545.5 / ton, up 1.81%, trading volume was 34000 lots, long positions increased by 2279 to 308000 lots; Shanghai Copper 2008 contract closed at 52750 yuan / ton, down 0.25%, trading volume was 70000 lots, long positions were reduced by 1961 to 113000 lots. Lun copper began to recover after falling as low as $6504 / ton last night, quickly breaking the daily moving average, and weakening slightly back to near the daily average in late trading. After the opening of night trading in Shanghai, the trend was stable, running at 52850 yuan / ton, and fell slightly at the end of the day. At present, copper prices remain strong due to supply-side disturbances. yesterday, the Chilean Centinela copper mine voted in favor of a workers' strike, which was positive for copper prices, but US stocks fell significantly in late trading because of concerns about the epidemic, limiting the rise of copper prices last night. On the whole, the capital side is loose and superimposed supply disturbances, the positive factors are still sustainable, and copper prices are expected to maintain an upward trend. It is estimated that today Lun Copper 6430 RMB6480 / ton, Shanghai Copper 51800 RMB52300 / ton.