CST
translation
Source:SMM
The non-ferrous market rose collectively during the day, with Shanghai copper rising 4.71% due to foreign mining strikes and other factors, while other non-ferrous metals rose more than 2%.

SMM7 March 13: the daytime non-ferrous market rose collectively today, with Shanghai copper rising 4.71% due to foreign mine strikes and other factors, while other non-ferrous metals rose more than 2%. Shanghai Zinc rose 2.62% MagneSMM believes that under the optimistic background of the capital market, the market speculation about the expectation of the peak consumption season has contributed to a strong rebound in zinc prices, but macroscopically, there is still great uncertainty in Sino-US trade relations and the development of the epidemic in the United States. It should be noted that China's flood control and flood fighting has entered a critical period, and the water level in many places has exceeded the record, and the emergency response has risen to level II. We should pay attention to the impact of the flood season on the start-up of local enterprises. In terms of recycled aluminum, aluminum prices have risen a total of 1000 yuan / ton in the last three days. Affected by the sharp rise in aluminum prices, the price of cooked aluminum has risen 100 yuan per ton nationwide, while the price of raw aluminum has risen in East and South China. Import scrap aluminum, the current overseas zorba (95 metal volume, 2% copper broken raw aluminum) Malaysia CIF price of 970 US dollars / ton, after preliminary treatment, the price is also around 1100 US dollars / ton, which is about 1500 yuan / ton lower than the domestic raw aluminum tax price. If imports are liberalized, domestic shocks are inevitable, and all parties remain on the sidelines for imported waste aluminum.

Black iron ore rose 4.8%, hot coil rose 1%, and thread rose 0.97%. Iron ore rose sharply today in anticipation of a recent reduction in supply in major iron ore suppliers. The epidemic situation in the supply side of foreign mines continues to ferment, and so far, the cumulative number of confirmed cases and epidemic deaths in Brazil rank second in the world, second only to the United States. And the news of the Brazilian president's confirmation has added to the market's concern about the local epidemic. In addition, iron ore shipments from Australia are expected to decline seasonally after the end of the fiscal year for large Australian miners in June. In the later stage, with the arrival of consumption in the peak season after plum production, the operating rate of long-process steel mills will remain relatively high. 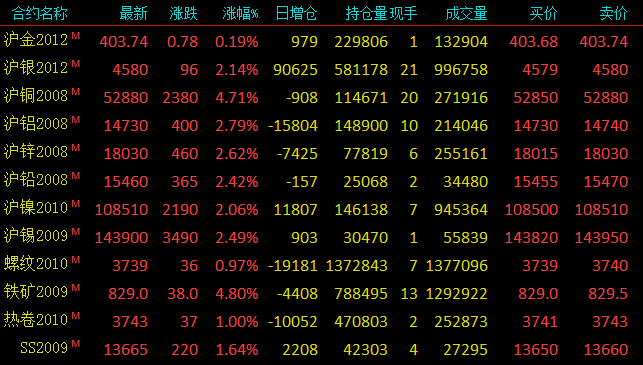 In terms of capital flow, there was an outflow of more than 2.3 billion yuan from the commodity market last Friday and successfully recovered 2.039 billion yuan today. Shanghai Silver and Shanghai Copper became the main attraction, earning 1.56 billion and 1.214 billion respectively. Both fuel and crude oil lost more than 300 million yuan. In terms of stock index futures, the three brothers are favored by funds, with a total harvest of more than 3 billion funds.

A brief comment on SMM analysts on July 13th

Copper: today, the main force of Shanghai copper opened at 52340 yuan / ton in the morning. after the opening, the copper price was arranged horizontally around 52640 yuan / ton position, and then the bulls continued to increase their positions to pull the copper price up, climbing a daily high of 53510 yuan / ton, when the bulls made a profit. The market briefly slipped to around 52810 yuan / ton, then rebounded to close at 53240 yuan / ton by noon. Copper prices opened in the afternoon for horizontal finishing, the center of gravity stabilized at 53180 yuan / ton position. Near the close, some bulls fell into the bag, and copper prices fell slightly and finally closed at 52880 yuan / ton, up 2380 yuan, or 4.71%. Today, the main contract of Shanghai Copper reduced its position by 908 to 115000, mainly as short positions were reduced, and the position was about to be completed. Next, focus on the monthly change of the main contract; trading volume increased by 119000 to 272000. Shanghai Copper 07 contract within the day accelerated reduction of 5290 positions to 7985 hands, mainly for short positions. 09 contracts significantly increased positions by 9259 hands to 108000 hands, and daily positions increased by more than 10,000 hands, mainly by bulls. Today, the copper in Shanghai is still strong, mainly due to the positive superimposed fundamentals of sustained macroeconomic easing, the scale of social financing in China in June far exceeded the value and forecast, and remained at a high level as a whole. continued monetary easing provides positive factors for the expected improvement of the capital market. The China Automobile Association released auto production and sales figures for June, up 22.5% and 11.6% from a year earlier, breaking the all-time high of production and sales in June, indicating that terminal manufacturing continues to pick up and macro optimism is good for copper prices. Fundamentals, Chile copper mine news again, Chile Antofagasta Minerals's Zaldivar copper mining union said that the copper mine workers voted to strike after rejecting the wage agreement. As soon as the news came out, the market worried about the supply strain caused by the copper strike in Chile, and the supply side remained tight, supporting the high price of copper. Today, Shanghai copper closed, MACD red column has increased, and the lower high jump is far from the multiple moving averages, volume price increase bullish forces are still gathering, the technical point of view is bullish copper price. Wait for the outer disk guidelines at night to test whether the bulls can continue to make efforts to support copper prices to continue to rise.