According to SMM survey data, the operating rate of scrap copper rod enterprises was 66.71% in June, a sharp increase of 23.08% from the previous month and 18.91% from the same period last year.

Copper prices continued to rise, which was conducive to the outflow of scrap copper, as well as the gradual relaxation of epidemic control in overseas areas from the end of April to May. Importers began to increase their orders, and raw materials such as scrap copper and copper ingots gradually entered the country to make up for the shortage of scrap copper supply. the shortage of raw material supply in waste copper rod enterprises has been alleviated again. Some of the established brands or powerful manufacturers who have been ploughed deeply in the scrap copper industry for many years have more abundant raw material channels. Under the condition of low product price and sales, the production capacity is running with high load, so as to further reduce the average cost and expand the competitive advantage. The overall operating rate of the scrap copper rod industry has rebounded to the peak season level of previous years. 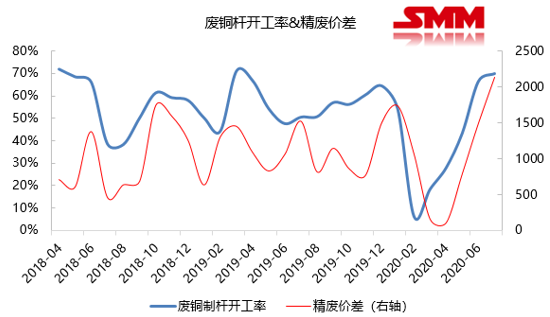 According to a survey by SMM, the operating rate of scrap copper rod enterprises is expected to be 70.12% in July, up 3.41% from the previous month, and 19.41% higher than the same period last year.

The main thing that restricts the overall operating rate is that the supply of raw materials is not loose, some manufacturers are unable to open multiple production lines for a long time, the supply of superimposed scrap copper increases hugely, and product prices rise slowly under fierce competition. some manufacturers take the initiative to maintain part of the capacity operation, more willing to hold raw materials, profit or more.