CST
translation
Source:SMM
The non-ferrous market continued to rise today, with copper and lead rising more than 2% and zinc rising 4%. The futures market of the stock market strengthened at the same time, the trend of industrial products was boosted, and the metal market rose in turn.

SMM7 March 9: today, the non-ferrous market continued to rise, Shanghai copper and Shanghai lead rose more than 2%, Shanghai zinc rose 4%. The futures market of the stock market strengthened at the same time, the trend of industrial products was boosted, and the metal market rose in turn. The news that the loading and unloading arm of a barge at the Honggou mine loading port broke down on July 3 and the shipment of the Honggou mine was delayed became the trigger for the zinc rally during the ignition period. However, in the short term, the fundamentals of the zinc market have entered a seasonal weakening, the downstream has entered the off-season of traditional consumption and superimposed the flood situation in the south, while the upstream processing fees rose in July and smelter inventories returned to normal levels also indicate that the raw mine supply is loosening. The trend of zinc prices depends on the choice of funds, boosted by macro optimism, hot money continues to pour into the market, and be vigilant against the situation in China and the United States and the tightening of domestic monetary policy in the future. But the fundamentals are empty and it is recommended to wait and see. For copper, first Quantum has been allowed to resume operations at its CobrePanama copper mine. In early April, the mine was shut down because of a new case of crown virus infection. First Quantum said the project would reach full capacity by mid-August. The company said it would provide updated CobrePanama2020 annual production guidance when it reports second-quarter results in late July. The mine had previously directed production of 210000 to 235000 tonnes of copper and 90, 000 to 100000 ounces of gold in 2020. But the union at Codelco in Chile said nearly 3000 workers had been infected with the new crown virus and supply-side disturbances still boosted futures prices.

Black closed higher across the board, with iron ore, threads and hot rolls all up more than 1 per cent. Iron ore continued the trend of night trading in the morning, once breaking 800 points. Iron ore spot, as the mainstream powder ore varieties are still tight, steel mills still favor the mainstream medium-and high-grade ore, for the port spot price has a certain support. The snail trend in the night market is strong, the market mood is hot, the spot market, the price rose 20tel 30 yuan / ton this morning, but the snail opened high and left low this morning, the market sentiment cooled rapidly, the transaction deviation, and the market price loosened around noon. Shagang quoted 3660LV 3670 yuan / ton, the demand side wait-and-see mood is strong, the low price transaction condition is general, the terminal takes the goods enthusiasm is low, mainly for the speculative demand.

Crude oil in the previous period was flat at 298.9 yuan / barrel. In the news, Gao Feng, a spokesman for the Ministry of Commerce, said at a news conference on the 9th that in order to speed up the improvement of the new oil circulation management system, the Ministry of Commerce, together with various departments, drafted the "opinions on promoting the High-quality Development of Oil products Circulation." on the basis of openly soliciting opinions and suggestions from all walks of life, it has been revised and improved, and relevant procedures are being implemented and will be introduced in the near future. 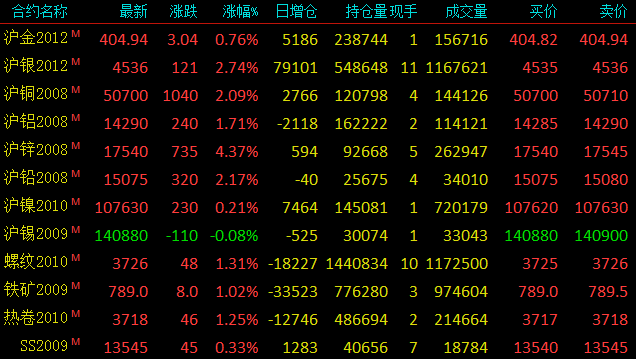 Commodities became popular in a large area, and the inflow of commodity index exceeded 1.5 billion. Shanghai Copper, which has repeatedly set new highs, is spoiled by funds, attracting nearly 700 million, and the non-ferrous plate as a whole has attracted more than 1 billion. The black system, which rose higher and fell back, was rejected, with coke losing more than 700m, iron ore losing nearly 400m and the black chain index outflow of more than 1.1 billion. IC in stock index futures rose at the top, with more than 4.2 billion capital inflows.

A brief comment on SMM analysts on July 9th

Copper: today, the main force of Shanghai Copper opened at 50210 yuan / ton in the morning, and the bulls increased their positions one after another after the opening, and the disk continued to rise to 50760 yuan / ton, then the center of gravity was briefly adjusted around 50790 yuan / ton, until it closed at 50620 yuan / ton at noon. At the beginning of afternoon trading, copper prices continued to rise, fluctuating higher at 50700 yuan / ton, climbing an intraday high of 50800 yuan / ton, taking profits at the end of the day, copper prices fell somewhat, and finally closed at 50690 yuan / ton, up 1040 yuan / ton, or 2.09%. The intraday 08 contract increased positions by 2766 to 120000, mainly by bulls; trading volume increased by 24000 to 144000; and Shanghai Copper 07 accelerated position reduction by 5910 to 19000, mainly by short positions. At present, the disk still maintains the back structure, and the price difference narrowed to around 20 yuan / ton every other month. Shanghai Copper 09, 10 contracts have varying degrees of increased positions. Today, Shanghai copper continued to rise, mainly due to continued macroeconomic optimism. The National Bureau of Statistics announced today that China's CPI rose 2.5% in June from a year earlier, down 0.1% from a month earlier, down 3.0% from a year earlier, and up 0.4% from a month earlier. The decline in PPI narrowed, indicating that domestic and foreign demand continued to pick up, domestic infrastructure and manufacturing demand gradually recovered, and market expectations for copper demand remained optimistic, boosting market confidence and supporting copper prices. Fundamentals, according to SMM research, China's electrolytic copper production fell 1.42% to 759200 tons month-on-month in June, and domestic electrolytic copper production is expected to fall by 2.79% to 738000 tons in July 2020. Supply tensions remain, providing momentum for rising copper prices. Shanghai copper has been positive for 3 consecutive days, MACD red column continues to expand, and the lower high jump is far from the multiple moving averages, from a technical point of view, bullish copper prices. Wait for the outer disk guidelines at night to test whether the bulls can continue to push upward at the 51000 yuan / ton mark.

Zinc: within the day, the main 2008 contract of Shanghai zinc opened at 17360 yuan / ton, some of the funds stopped earnings and left the market at the beginning of the day, and zinc was adjusted in a narrow range around 17400 yuan / ton, followed by the re-entry of buying funds. Zinc concussion rose again to a high of 17640 yuan / ton, and fell slightly at the end of the day. The final closing price rose to 17540 yuan / ton, up 735 yuan / ton, or 4.37%. The trading volume increased by 97173 lots to 263000 lots, and the position increased by 594 lots and 92668 lots for children. Zinc in the future recorded a large positive pillar to fill the gap in the early stage, and the Shanghai Zinc Index increased its position by another 6726 hands in the day, the performance continued to be strong, the current market optimism continued to ferment, and the expectation of weakening fundamentals in the short and medium term was ignored by the market. Supported by strong buying confidence based on valuation repair, it is expected that zinc in the evening will try to fill the gap completely.

Lead: within days, the main 2008 contract of Shanghai lead opened at 14855 yuan / ton. In early trading, non-ferrous metals generally rose. Shanghai lead rose all the way with the metal plate, reaching 15015 yuan / ton near noon. At the Wanwu integer gate, some bulls made profits and gave up some of the gains. It was supported around 14930 yuan / ton and rebounded again. In the afternoon, the Shanghai Composite Index rose sharply, and the Shanghai lead bulls entered the market strongly, followed by the upside, further pulling the Shanghai lead to an intraday high of 14145 yuan / tonne. At the end of the session, some bulls made a profit, closing at 15075 yuan / ton, up 235 yuan / ton, or 1.58%. The position decreased by 40 to 25675, and the trading volume increased by 11015 to 34010. Shanghai lead recorded Erlianyang, thoroughly stood on the 5-day moving average, active trading, KDJ indicators have also been opened upward, the overall technical side is more, but the top of Shanghai lead is under the pressure of 15180 yuan / ton, and the bulls reduce their positions in the high position, it is necessary to pay attention to whether the bulls enter again at night, it is expected that Shanghai lead will be dominated by high shock. It should also be noted that the price difference between 07 contracts and main contracts widened from 270 yuan / ton to 390 yuan / ton, while the warehouse receipt inventory increased by only 101 tons today. The warehouse receipt inventory of less than 20, 000 tons does not match the position of nearly 8000 hands of the 07 contract in that month. It is expected that Shanghai lead will remain strong in the short term.