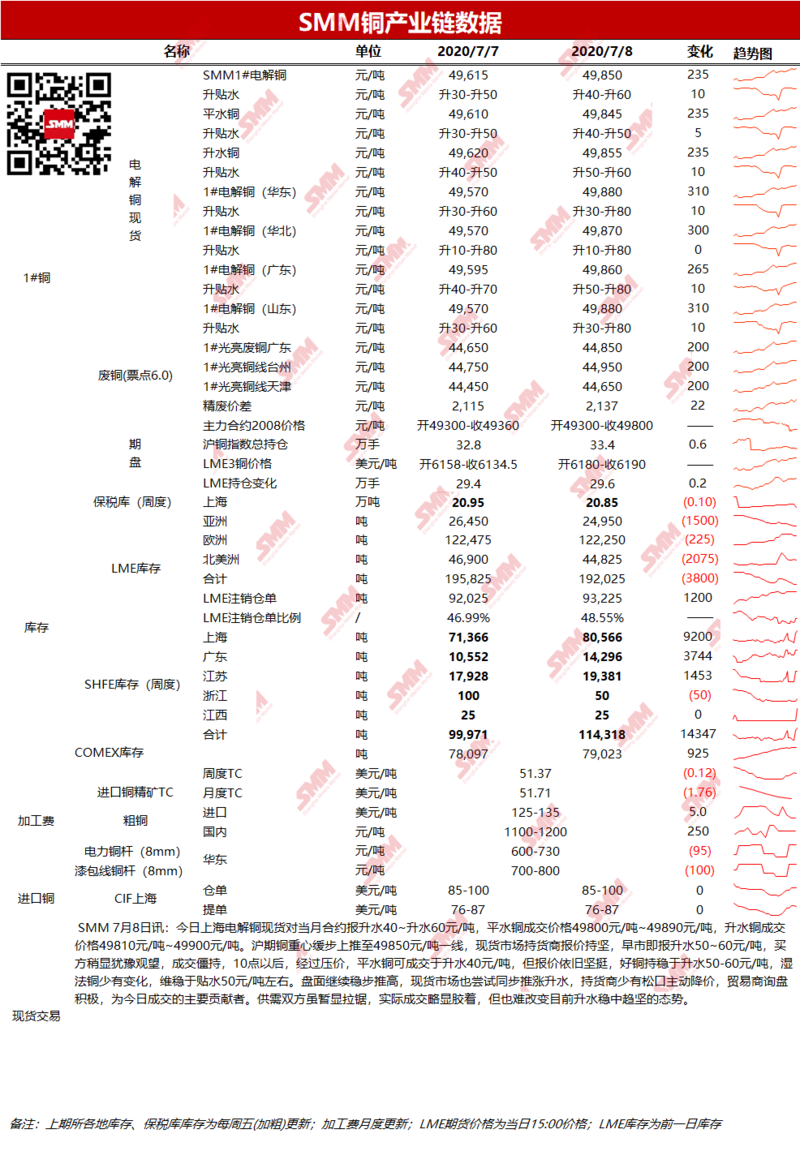 The macro aspect: 1) the US national security adviser said that Trump kept a close eye on TikTok, WeChat and other Chinese applications used to obtain US personal data and suspected of malicious use, and said there would be major measures against China in the coming days and weeks. The Chancellor of the Exchequer has announced a new stimulus package of 30 billion pounds to help the economy out of recession, including a 9.4 billion pounds job retention incentive scheme. [Lido] 3) China will release inflation data for June today. As commodity prices rebound, the decline in producer prices is likely to slow; consumer price increases are expected to remain stable. [neutral] fundamentals: 1) 6 new cases of crown virus infection have been reported in Glencore's KCC copper mine in Lualaba province, Congo gold province. None of the other workers tested showed signs of infection with the new crown virus, and they are being isolated at home under medical supervision. 2) the price of scrap copper in Guangdong is 44700 yuan / ton ~ 45000 yuan / ton, which is 200 yuan higher than that of the previous trading day. The price difference of fine copper scrap is 2137 yuan / ton, and the month-on-month expansion is 22 yuan. Copper prices improved yesterday, some scrap copper will be bullish, the willingness to deliver is not high, but the overall high copper price is still good for scrap supply. In addition, the remaining batch volume in June is sufficient to superimpose a large number of batch distribution in July, and the specific scrap copper import volume should be gradually reflected. 3) on July 8, the warehouse receipt for imported copper was quoted at US $85mur100 / ton, the average price was unchanged from the previous day, and the bill of lading quoted US $76mur87 / ton, the average price was unchanged from the previous day. The LME0-3 discount is US $3.25 / ton, and the import loss is around 200 yuan / ton. Trading in the market continued to remain light yesterday. On the demand side, due to day-to-day losses in price comparison, there are few market inquiries, and the difficulty of matching prices between buyers and sellers leads to a stalemate in the performance of market transactions. Warehouse receipt prices are relatively stable, and it is difficult to see a deal under the deadlock in buying and selling power. 4) LME copper inventory decreased by 3800 tons to 192025 tons compared with the previous period, while copper warehouse receipt inventory increased by 327 tons to 40289 tons on July 8. 5) spot East China: on July 8, Shanghai electrolytic copper spot quoted a price of 40 to 60 yuan per ton for that month's contract. On the spot side, due to the lack of copper imports this week, even if the supply is on the low side, even if the disk is pulled up, the price-raising sentiment of the consignors is not reduced, and it is expected that the spot price will remain stable today. It is expected that the spot water will rise to 30 RMB50 / ton today. South China: on July 8, the spot price of electrolytic copper in Guangdong province rose 50% to 80% of the contract for that month, with an average price increase of 10 yuan / ton. Spot market: although copper prices continue to rise, inventories are reduced, giving holders more strength to push up prices. However, yesterday, shippers were limited to imported copper, and domestic pc was even more difficult to get. In the second trading session, shippers raised prices one after another. Generally speaking, the supply of goods that can actually be circulated in the market is limited, which makes the intraday rising water rise, but the high copper price suppresses the activity of trading, and the overall transaction is still mediocre. Finally, as far as we know, a smelter began to overhaul, and it is expected that inventory will be easy to fall and difficult to rise in the future. Copper price and forecast: last night, Lun copper closed at US $6236 / ton, up 0.69%, trading volume of 17000 lots, bulls increased their positions by 3149 to 299000 lots. The Shanghai Copper 2008 contract closed at 50180 yuan / ton, an increase of 1.05%. The trading volume was 54000 lots, and the bulls increased their positions by 1133 to 119000 lots. Last night, Lunn copper began to pull up before the US market, quickly breaking the 6200 mark, while Shanghai copper also moved higher after the opening, breaking through the 50, 000 mark, as profit trading understood that copper prices fell in the short term, but the long throw dominated and then continued to rise. Copper prices rose last night mainly due to heightened concerns about the stability of Chilean copper supply. At present, the number of copper mine infections in Chile has exceeded 5000, covering more than 60 per cent of annual production capacity. Copper prices continue to rise supported by good supply. On the macro side, policy easing is expected to continue to drive U. S. stocks higher, domestic A shares also strong risk aversion sentiment fell back to a two-week low of the dollar, resonating with the copper market. It is estimated that today Lun Copper 6210 won 6270 US dollars / ton, Shanghai Copper 49900muri 50300 yuan / ton.