Black rose across the board, with iron ore leading a rise of more than 3 per cent, followed by coke and threads by nearly 2 per cent. Rebar futures broke through 3700 points in one fell swoop, reaching a seven-month high. Now that the epidemic in the north is improving, the performance of terminal demand is relatively better, while rain in eastern and central China is still a drag on demand release and good trading at low prices. The fundamentals of the spot market are improving marginally. However, in view of the college entrance examination and the rainy season still have a certain degree of suppression on the demand side, the sustained upward trend of prices in the short term has not yet been formed. Iron ore has gained momentum due to falling supplies and market concerns about the epidemic in Brazil.

Crude oil rose 0.37% in the previous period. Outer disk oil prices fell on Wednesday as industry data showed an increase in crude oil inventories in the United States and a surge in new crown virus infections in the United States and elsewhere raised doubts about the outlook for fuel demand growth. Brent crude futures held steady at $43.08 a barrel. West Texas Intermediate (WTI) futures fell 3 cents, or 0.7 percent, to $40.59 a barrel. 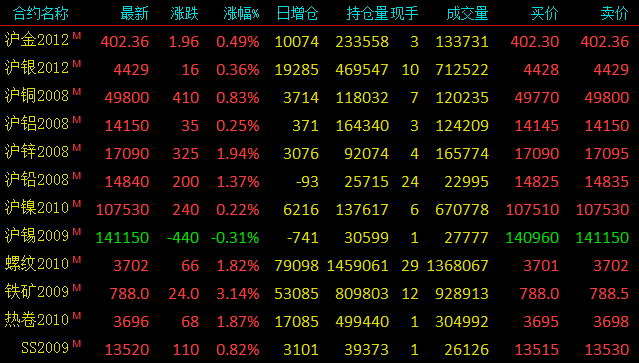 The futures market is red in a large area, and the commodity index strongly attracts more than 3 billion. Iron ore rose sharply in a row, increasing its positions by nearly 60, 000 hands in a day, winning more than 1.4 billion of funds, while other varieties also showed bright performance. the black chain index rose strongly, harvesting a total of nearly 3.2 billion of funds. The three major futures indexes that have risen slightly have collectively attracted more than 2.7 billion of the money. Copper in Shanghai rose again, zinc in Shanghai rose at the top, and the inflow of non-ferrous metals was close to 800 million. Most chemicals fluctuate in a narrow range, and the chemical sector has lost more than 500 million dollars.

A brief comment on SMM analysts on July 8th

Copper: the main copper in Shanghai opened at 49810 yuan / ton in the morning. After the opening, the copper price briefly rose from the position of 49830 yuan / ton to a low of 49550 yuan / ton. With the bulls increasing their positions one after another, the disk rose slightly and closed at 49770 yuan / ton at noon. At the opening of afternoon trading, Shanghai copper fluctuated in a narrow range around 49770 yuan / ton. At this time, the copper price quickly climbed to the intraday high of 49970 yuan / ton. Near the end of the day, the bulls took profits, and the copper price fell back to 49800 yuan / ton, up 410 yuan / ton, or 0.83%. The intraday 08 contract increased its position by 3714 to 118000, mainly by long positions; trading volume increased by 1000 to 120000; Shanghai Copper 09 increased by 4913 to 92000, mainly by long positions; and Shanghai Copper 07 continued to reduce its positions by 3835 to 25000. At present, the liquidity of economic policy continues to be loose, the Federal Reserve Meester said that it will maintain a loose monetary policy and will do more to support the economic recovery, and the macroeconomic environment continues to improve to boost market risk appetite, which is good for copper prices. Driven by Lun Copper, Shanghai Copper continued to rise today. In terms of fundamentals, the epidemic continues to spread in South America, with a total of more than 300000 confirmed cases in Chile. The Chilean National Copper Mining Workers Association released news that a large number of miners and workers in major copper mining enterprises in Chile have diagnosed new crown pneumonia, with a total of more than 3500 confirmed cases. Worries about tight copper supply in the market have fermented again, supporting copper prices to rise. Shanghai copper has closed for 3 consecutive days, MACD red column has expanded, and below there are 5-day moving average line supporting the bottom, technical point of view Lido copper price. At present, Lun Copper has surged to a high of US $6200 / tonne, and if the strong momentum is maintained, Shanghai Copper opened at the 50000 mark that night, standing on a new platform.

Lead: during the day, the main 2008 contract of Shanghai lead opened at 14750 yuan / ton. In early trading, non-ferrous metals generally rose, short positions reduced, long positions increased, Shanghai lead prices were boosted and fluctuated upwards along the daily moving average. Near noon, Shanghai lead reached 14830 yuan / ton, approaching the previous high, bulls made a profit, Shanghai lead pullback, fell near the daily moving average in the afternoon, and then the bears fell back, leaving the market one after another, lead prices turned around again, and at the end of the day, It finally closed at the intraday high of 14840 yuan / ton, up 170 yuan / ton, or 1.16%. The position decreased by 93 lots to 25715 lots, and the trading volume increased by 2813 lots to 22995 lots. Shanghai lead recorded bald Changyang, the overall trend is strong, transactions are active, k-line entities re-stand on the 5-day moving average, to explore the previous high, KDJ indicators have been closed, the overall technical side is more, but the rise in Shanghai lead prices is based on short positions as the premise, need to pay attention to whether the night short will enter high, it is expected that Shanghai lead will be supported by the 5-day moving average, bearing a pressure of 14840 yuan / ton first-line concussion. It is worth noting that the main 08 contract position is decreasing, while 09 contract and 10 contract position increased by 340 hands, the total position is about 23000 hands, approaching the main 08 contract position, indicating that the main capital continues to move backward, 08 contract and 09 contract price difference has also shrunk from 85 yuan / ton to 65 yuan / ton. In addition, the position in 07 contracts in that month remained at nearly 8000 hands, while warehouse receipt inventory was almost the same as yesterday, and the growth rate continued to slow.