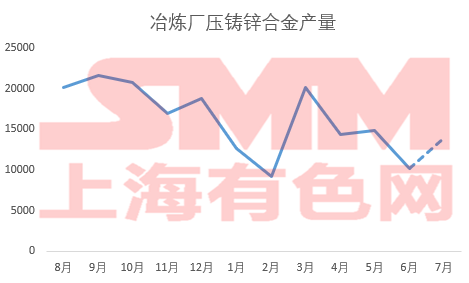 In June, the consumption of die-casting zinc alloy is still weak, the terminal foreign trade orders are still not improved, the orders of manufacturers such as zippers and zinc alloy jewelry are poor, some production lines are suspended or changed to production masks, and terminal enterprises such as sanitary ware and hardware are still dominated by domestic demand orders. however, China has entered the off-season of traditional consumption, and the overall demand has also shrunk, while the output of alloy factories under the smelter continues to increase in June, and the current production is close to full capacity production. In order to alleviate the sales pressure, seize the market at a low price, making it more difficult for other brands of die-casting zinc alloy factories to sell. Under the background of weaker consumption, the smelter reduced the output of die-casting zinc alloy, coupled with the additional maintenance of individual smelters in June, affecting the output of zinc alloy, resulting in a month-on-month reduction of more than 4700 tons of alloy output produced by the smelter in June.

At present, the improvement of terminal foreign trade orders is not obvious, and the consumption of die-casting zinc alloy is also impacted by the supply of individual low-price alloys. however, with the resumption of production after the completion of smelter maintenance, it is expected that the production of die-casting zinc alloy produced by the smelter will show a state of restorative growth in July.