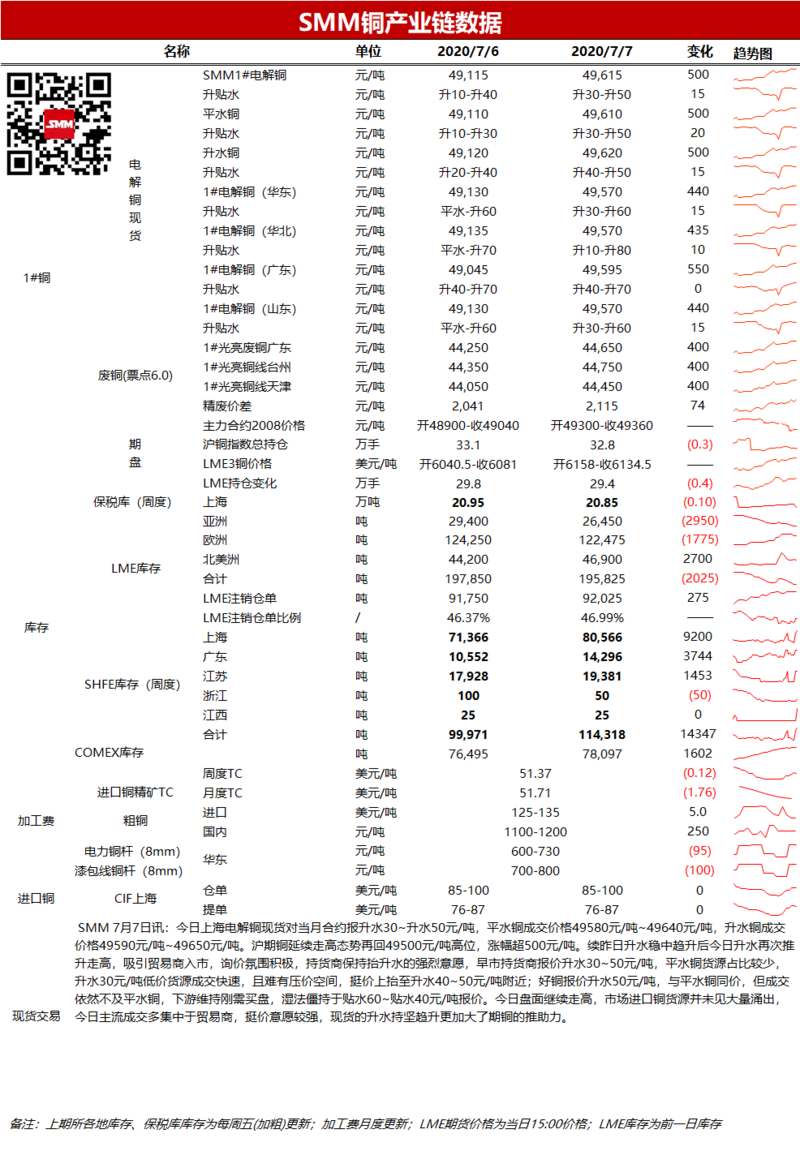 Macro aspect: 1) the API crude oil inventory announced in the early morning unexpectedly increased by 2.05 million barrels, which was higher than the decrease of 3.4 million barrels expected by the market. [negative] 2) World Health Organization Director-General Tan Desai said that the outbreak of the new crown virus is still accelerating and we have not yet reached the peak level of the epidemic. The situation is not very good across Latin America, with confirmed cases and deaths on the rise. Chile's mining minister said he was optimistic about copper prices and that current levels should be maintained as copper production is unlikely to rise. If the number of new crown pneumonia cases increases, production is expected to decline further. [negative]

First Quantum is resuming full production of its Cobre Panama copper business after a three-month interruption caused by covid-19. The company has received notice from the Panamanian Ministry of Health to cancel the temporary suspension of mining activities at the Cobre Panama mine, which has been in conservation and safety maintenance mode since early April. The plant is expected to reach full capacity by mid-August. 2) the price of scrap copper in Guangdong was quoted at 44500 yuan / ton ~ 44800 yuan / ton on July 7, which was 400 yuan higher than that of the previous trading day. The price difference of fine copper scrap was 2115 yuan / ton, and the month-on-month increase was 74 yuan. (the ticket point is calculated as 6%) the copper price rose sharply yesterday, which is good for the scrap copper merchants to ship and change the line. According to SMM, a scrap copper rod enterprise downstream has sufficient raw materials for scrap copper, and there is still a lot of waste copper to be inspected and stored. At the same time, cheap scrap copper rods are very popular and are currently in full production. 3) on July 7, the warehouse receipt for imported copper was quoted at US $85 per ton, with an average price unchanged from that of the previous day, while the bill of lading quoted US $76 per ton, with an average price unchanged from that of the previous day. LME0-3 has a premium of US $6.75 per tonne, with an import loss of around 250RMB per tonne. Yesterday, the imported copper market was limited by deserted demand and low activity. The number of offers made by the consignors is limited and they are unwilling to lower their quotations in the hope that the price will pick up. But the buyer intends to reduce the price, and the counter-offer price is about 85 US dollars / ton. The price gap between buyers and sellers is difficult to close, resulting in a stalemate in the market. The warehouse has not heard of the deal in the morning, and the price remains unchanged for the time being. At present, LME presents a cargo premium structure, and some traders say that recently, most of the goods arriving in Hong Kong are directly declared for import without entering the bonded warehouse, and the increase in bonded warehouse inventory is expected to be limited this week. 4) on July 7, LME copper inventory decreased by 2025 tons to 195825 tons compared with the previous period, and copper warehouse receipt inventory increased by 974 tons to 39962 tons compared with the previous period. 5) spot East China: on July 7, Shanghai electrolytic copper spot quoted a price of 30 to 50 yuan per ton for the current month's contract. On the spot side, although the market rose yesterday, the influx of imported copper was less, inventories are still low, and traders are expected to be in a rising water mood. It is estimated that the spot water is 40 yuan / ton today-60 yuan / ton. South China: on July 7, the spot price of electrolytic copper in Guangdong province was quoted as a rise of 40 cents to 70 percent of the contract for that month, with the average price unchanged. Spot market: under the background that inventory continues to increase and copper prices hit new highs, the price of the consignor was weak yesterday. In early trading, Pingshui Copper once reported rising water 60 yuan / ton, but there were few receivers, and the consignor could only lower the rising water for shipment. Overall, copper prices continue to hit record highs, suppressing the purchasing enthusiasm of downstream manufacturers, which generally maintain the reluctance to increase inventory by purchasing on demand. In addition, the lower reaches prefer low-price non-standard and wet-process copper, which is also one of the reasons for the inactive trading of flat copper. Finally, it is understood that imports of copper will still arrive in the next few days, and stocks are easy to rise and difficult to fall, rising water or maintaining low shocks. Copper price and forecast: last night, Lun Copper closed at 6193 US dollars / ton, up 0.86%. The trading volume was 17000 lots, and the long positions increased by 1819 to 296000 lots. The Shanghai Copper 2008 contract closed at 49830 yuan / ton, an increase of 0.95%, and the trading volume was 56000 lots. Long positions increased by 1867 to 116000 lots. Yesterday, the copper price was pulled up in the night market after stepping back, and the operation center continued to move up, and the copper in Shanghai was close to 50000 yuan / mark. The recent rise in copper prices is mainly supported by the strong supply side, Chilean copper mine production uncertainty is due to the accumulation of epidemic factors, the market is worried about the supply of bulls continue to enter the market. On the macro front, the Bank of England expects asset purchases of 750 billion pounds by the end of the year, and the US government hopes to pass another stimulus package by the first week of August. Although the resumption of the economy has been suspended in some areas, policy easing continues market optimism. It is estimated that today Luntan 6150lu 6220 US dollars / ton, Shanghai Copper 49700Mutual 50100 yuan / ton.